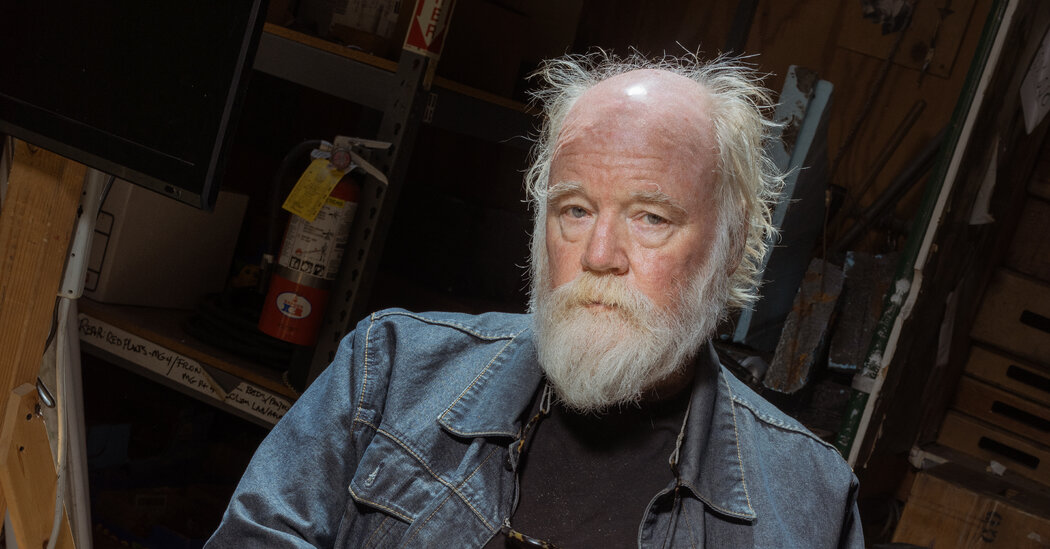 A maverick of stop-motion animation and a restless Renaissance man, Phil Tippett is the visual effects alchemist accountable for emblematic sequences in among the hottest American film productions of the Nineteen Eighties and ’90s.

Tippett’s indelible gifts to cinema include animating the AT-AT walkers in “The Empire Strikes Back,” lending his deep knowledge of dinosaurs to visualise the velociraptor kitchen scene in “Jurassic Park,” and constructing and animating the imposing ED-209 robot seen within the “RoboCop” franchise.

The director of “RoboCop,” Paul Verhoeven, has long been impressed with Tippett’s handcrafted style.

“Personally, with a number of digital stuff I often don’t imagine it, but with Phil, I think it,” Verhoeven said in a phone interview. “He could make characters move in a way that you just don’t doubt for a second that they’re there. And he can integrate these stop-motion creatures with the remainder of the shots, which may be very difficult to do.”

Tippett, 70, also worked on sequences for Verhoeven’s “Starship Troopers.” The filmmaker emphasized the worth of Tippett’s contributions.

“In my eyes, his participation was as necessary as my very own,” Verhoeven said. “I actually thank him for what he did for my movies.”

For Tippett, a prosperous career began as a childhood fascination with the tactile magic of the monsters in “King Kong” (1933) and “The seventh Voyage of Sinbad” (1958). After pursuing a conceptual art education on the University of California, Irvine, he honed his unique skill set experimenting with stop-motion, after which making commercials on the Cascade Pictures studio in Los Angeles.

As a component of the teams that helped realize the imaginative worlds of George Lucas and Steven Spielberg, Tippett earned two Academy Awards.

“I all the time considered myself as a choreographer working on movies, and that was my relationship with directors,” Tippett said. “Every part that I did was performance-based.”

During a recent video interview, Tippett wore a snug sleeveless black shirt and sat caressing his long white beard, like a biblical figure lost in our current era. He was at his work space at Tippett Studio in Berkeley, Calif., where his ventures are born.

Of all the feats to his name, “Mad God,” a stop-motion feature now in theaters and streaming on Shudder, proved essentially the most taxing. Thirty-three years within the making — from his earliest sketches and storyboards in 1987 to its completion in 2020 — this macabre magnum opus tracks an enigmatic character as he descends into the bowels of a Dante-like realm plagued with death, violence and grotesque creatures.

“‘Mad God’ was motivated by the unconscious and never by intention,” Tippett said. “It was a spiritual experience for me within the sense that I just I felt like I used to be transcribing messages from the nice beyond. I don’t seek; I find.”

Within the early Nineteen Nineties, Tippett conceived three minutes of what would develop into “Mad God” with the assistance of the crew that worked on the “RoboCop” movies. But after they moved on, proceeding on his own became too daunting.

Unsure of precisely where the kernel of inspiration for “Mad God” had originated, Tippett spent the subsequent 20 years devouring information on quite a lot of subjects to expand on it: theology, archaeology, paleontology and psychoanalysis.

It wasn’t until about 12 years ago, when young colleagues at Tippett’s studio saw him archiving that original footage and galvanized to support him, that the success of his vague concept seemed possible.

Volunteers from local schools also joined the makeshift production, which slowly began taking shape with resources gathered from several successful Kickstarter campaigns. After just a few years, Tippett had accomplished 45 minutes (in three separate segments) of this free-flowing idea, at which point he decided to double the running time to make a feature.

Tippett, who shouldn’t be keen on digital techniques, pushed to attain nearly every aspect of this gruesome parable via in-camera, practical means — the way in which he has all the time done it. This will be seen within the meticulously detailed craft on display in each increasingly bleak frame.

He used a fish tank and corn syrup to conjure up the cloudy opening sequence that contains a plastic replica of the Tower of Babel he bought online. He shot a surgery scene with live-action actors at a low frame rate to mimic the movement of stop-motion animation, and for 3 years he enlisted the help of as much as six students, someday per week, to fabricate piles of melted plastic soldiers.

“I desired to make something ugly and delightful without delay,” said Tippett, who cited the work of the painter Hieronymus Bosch as a serious influence.

Tippett also mined his own subconscious for creative fuel. “In the course of the period that I used to be working on ‘Mad God,’ I used to be a prolific dreamer,” he said. “Every night I’d have these amazing dreams that I’d write down and use.”

“Mad God” constitutes essentially the most complete expression of his erudite image-making expertise, but its consummation nearly drove him to real madness. Hyper-focused on ending, working obsessively for hours on end and drinking each day, Tippett subjected himself to such exhaustion he landed in a mental clinic. He was later diagnosed with bipolar disorder.

“Because it happens to many artists like Beethoven or Carl Jung, particularly if what they’re working on is over a protracted time period, it really popped my cork at the tip of it,” he said. “My manic side is my superpower, but when I don’t manage that, it could possibly destroy me.”

“The strongest thing about Phil as an artist is that he feels every thing to the intense,” Dennis Muren, an Oscar-winning veteran within the visual effects industry and a longtime friend of Tippett’s, said in a phone interview. “He wants that feeling to return across on the screen and it doesn’t matter the way it gets there.”

“This movie taught me rather a lot about myself,” Tippett said. “I didn’t even think that I had the capability to do something of this magnitude.”

Tippett is relieved that “Mad God” has left his psyche and his studio, and has now haunted film festival audiences to great reception; he mischievously recounted the time a family with young children walked in to look at the film, only to run away soon after.

“That was amusing because in the event you hear, ‘It’s an animation film by the guy who worked on ‘Star Wars,’ people think, ‘Kids will adore it. It’s like a Pixar film.’ And well, it ain’t,” he said.

A grateful Tippett confessed that, due to the priceless creative opportunities he’d been given, he could easily be convinced that our reality is a simulation. While he said he would never again attempt a project as all-consuming as “Mad God,” he doesn’t regret having undergone the ordeal. And he’s already written a sequel.

“It might be very embarrassing to die and never have taken the opportunities that were handed to me, to not make something that was unique,” he said.