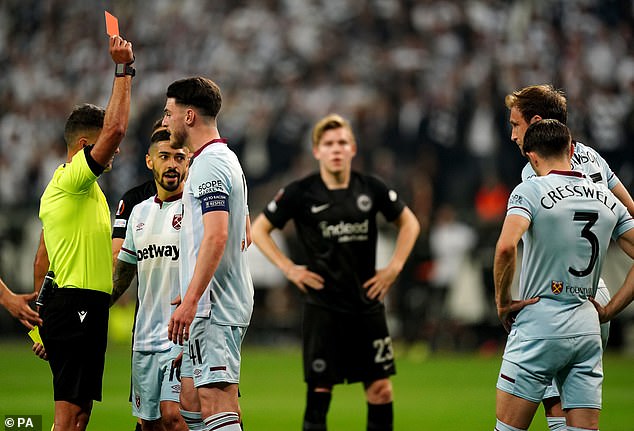 ‘You possibly can’t be handsy… that’s all the time going to be given’: Pundits agree West Ham’s Aaron Cresswell DID deserve a red card in Europa League semi-final against Eintracht Frankfurt despite Hammers complaints

By Max Mathews For Mailonline

Joe Cole and Carlton Cole stated West Ham’s Aaron Cresswell was rightly sent off in the primary half of his side’s Europa League semi-final on Thursday.

Trailing 2-1 from the primary leg last week, the Hammers were dealt a hammer blow within the nineteenth minute of their last-four tie against Eintracht Frankfurt when left back Cresswell dragged down Jens Petter Hauge and received his marching orders.

The visiting side’s players were furious with the choice, but BT Sport pundits Cole and Cole – each former West Ham players – insisted it was the precise call. 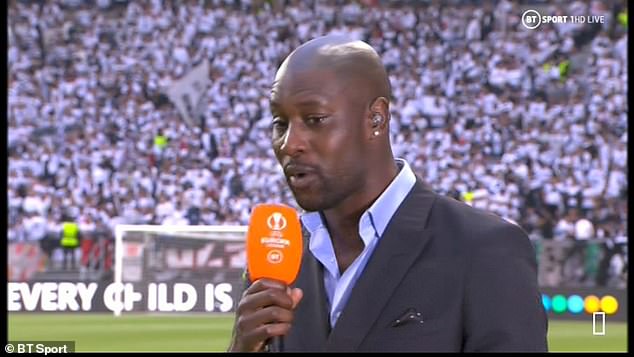 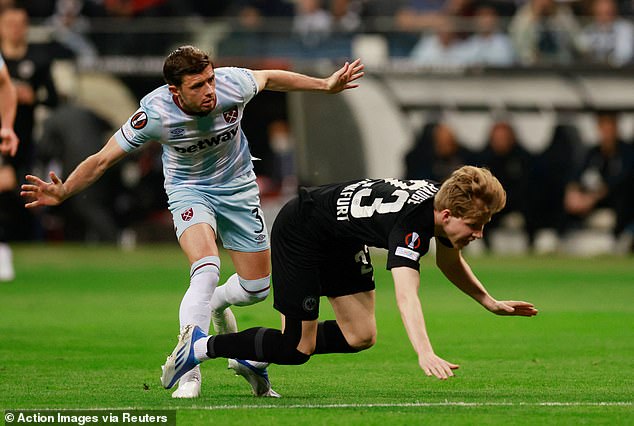 Former Chelsea and Hammers striker Carlton said: ‘It’s just one in every of those, he needed to have learnt from his last mistake. You possibly can’t be handsy within the Europa League. That one is all the time going to be given.

‘You possibly can’t be isolated one-on-one. It wasn’t even an awesome ball! He’ll be so upset and now they must cope with the implications.’

Joe added: ‘It’s the precise decision. A disastrous start for West Ham. It is a lofted ball and he gets clumsy.

‘By the letter of the law it’s a transparent denial of a goalscoring opportunity. He gets the mistaken side and it needs to be a sending off.’

Fellow pundit Owen Hargreaves concluded: ‘It’s the precise decision. Once the ball bounces for Cresswell, he’s in every kind of trouble. He just gets caught mistaken side and the referee needed to make that call.’

And fans gave the impression to be united in social media within the aftermath of the sending-off, criticising Cresswell for his actions somewhat than the referee.

One said: ‘Don’t wanna hear Cresswell is sweet enough anymore. He’s made too many silly mistakes this season which have cost us.’

One other added: ‘Cresswell doesn’t do basics. Also doesn’t learn from the mistakes he continually makes.’

A 3rd posted: ‘Could genuinely cry rn (right away), Cresswell doesn’t get that red and we’d genuinely win this game , heartbreaking man’.

One other tweeted: ‘Just seen Cresswell sending off. Terrible defending. Absolutely shocking again from him,’ with a fifth concluding: ‘Cresswell can chuck that on his CV when he’s in search of a recent job’.