Recent Music From Blink-182, the 1975 and Queen’s Unheard Song With Freddie Mercury 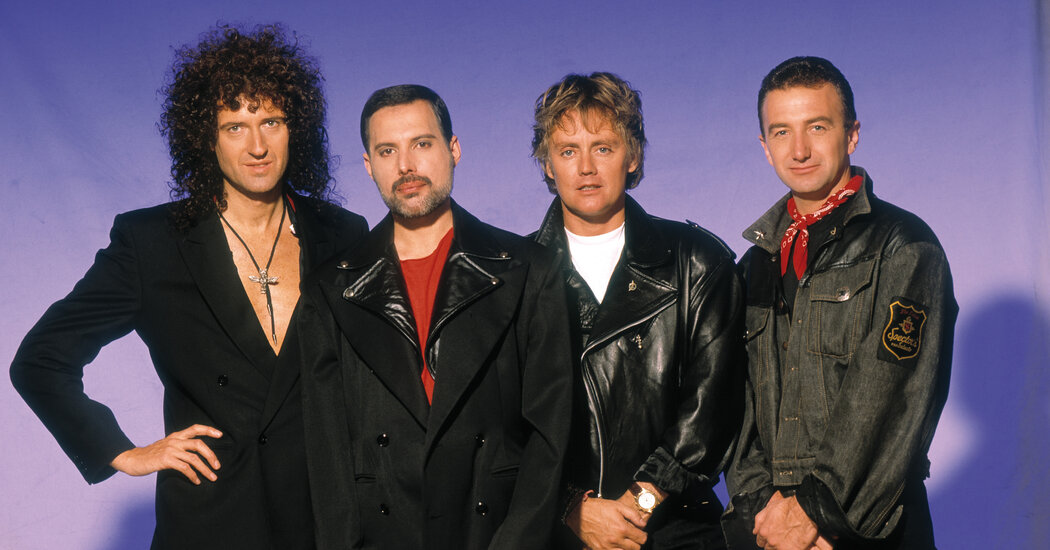 Freddie Mercury packed drama into every syllable when he sang “Face It Alone,” a track Queen rediscovered in 1988 session archives while preparing a much-expanded reissue of its 1989 album, “The Miracle,” and has now rebuilt. It’s a dirge about inevitable, existential loneliness, set to slow, bare-bones arpeggios and funereal drum thuds, and Mercury’s voice expands it to arena scale as he moves between confidential croon and balcony-rattling rasp. JON PARELES

The 1975 repeatedly goes roving through rock and pop’s back catalog, trying on styles. “Oh Caroline” doesn’t go for the apparent musical reference — the incomparably vulnerable “Caroline, No” by the Beach Boys — but as a substitute to the era when Michael McDonald led the Doobie Brothers, with electronic percussion, scrubbing guitars and burbling keyboard chords. “Caroline, I need to get it right this time,” Matty Healy sings, making abundant romantic guarantees, as he travels amongst eras with the liberty of the web. PARELES

Nessa Barrett, 20, established herself on TikTok with songs about pain, self-doubt and thoughts of death. The comic relief on her latest debut album, “Young Eternally,” is “Uninterested in California,” a sweet-voiced summation of the attractions, superficiality and ennui of aspiring to stardom in Los Angeles. “I get sick of sunshine on my perfect skin,” she lilts, to a tune harking back to “Tom’s Diner” by Suzanne Vega; then she contemplates death as a profession move that may leave her “young perpetually”: “You get more famous whenever you die.” The production riffles through Los Angeles specialties: crunching EDM, orchestral bombast, hair-metal guitars and confessional piano chords. It’s supremely self-conscious. PARELES

Lil Baby featuring EST Gee, ‘Back and Forth’

As Lil Baby eases into rap superstardom, he tends to lean on his melodic side, a mix of savvy and conciliation. But “Back and Forth,” from his latest album “It’s Only Me,” is something barely more pure — only a pair of icy verses from Lil Baby and the Kentucky firebrand EST Gee about all the varied varieties of conquest. JON CARAMANICA

The pop-punk-reunion Mount Rushmore is finally complete — the essential (but not original) lineup of Blink-182 has reunited (again). Tom DeLonge is rejoining Mark Hoppus and Travis Barker for a tour next yr; the announcement got here with a latest song, “Edging,” which marks the primary time this lineup has been within the studio together in a decade. It’s familiar but uncanny, Botoxed tight but with not one of the puerile joy that marked the group’s breakout hits. A part of Blink’s charm was the sense that it would unravel at any moment; this means it’s content to stay contained. CARAMANICA

Sevdaliza, who was born in Iran and grew up within the Netherlands, confronts the repression of girls in “Woman Life Freedom,” a song that begins with stark intimacy — just vocals — and builds right into a somberly devastating orchestral march. Sevdaliza sings, “I used to be taught compliance within the name of the sword/That stabbed every dream I might be.” The title is taken from the watchwords of current women’s protests in Iran, and the track mixes in spoken words calling for an end to Iran’s dictatorship. However the music’s impact and ambition will not be only topical. PARELES

“Atemporal” (“Timeless”) is from “Ay!,” the most recent high-concept album by Lucrecia Dalt, a Colombian composer and songwriter who has these days moved into film (“The Seed”) and tv (“The Baby”) scores. “Ay!” is about an alien entity, Preta, who first experiences linear time and physicality on a visit to Earth; for Dalt, it’s also about memories and warpages — sonic, spatial and durational — of the music she grew up on. “Atemporal” is kind of a bolero, disassembled and rebuilt in ways in which can sound vintage or computer-tweaked, with loads of clanky percussion; it’s wayward with a purpose. PARELES