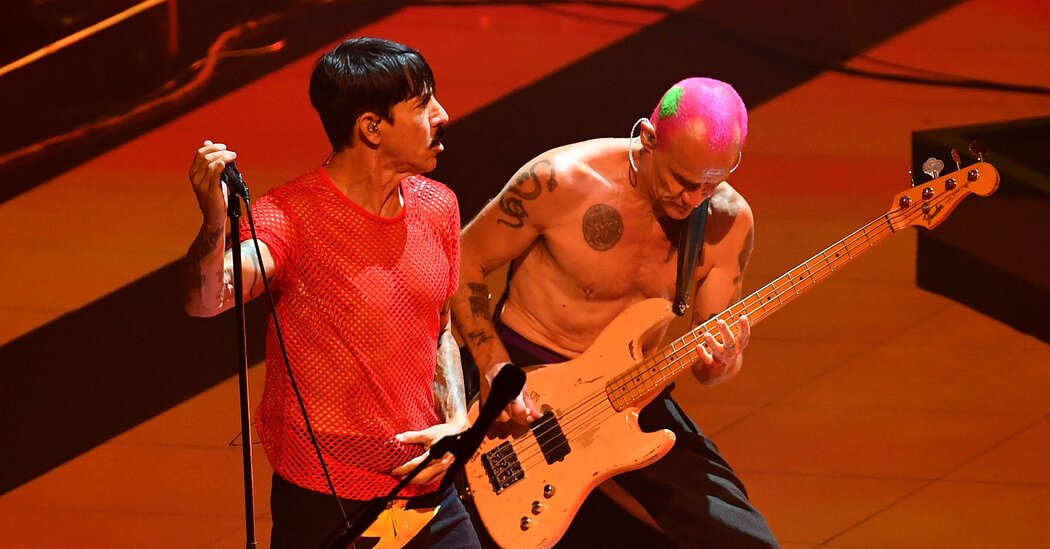 Red Hot Chili Peppers memorialize Eddie Van Halen and Nineteen Eighties Los Angeles with what feels like an old-fashioned, real-time studio jam in “Eddie.” Anthony Kiedis sings biographical snippets — “My brother’s a keeper/I married a TV wife” — while Flea’s bass and John Frusciante’s guitar chase one another during the song, in an ever-changing counterpoint of hopping bass lines and teasing, wailing, shredding, overdriven guitar — the sound of a band in a room, still pushing each other. PARELES

In “Muscle Memory,” Kelsea Ballerini orchestrates an instinctive reunion with an past love — “my body won’t forget our history” — with classic tools: two chords, a backbeat, a lead guitar with wordless caresses. “How long will you be back on the town?” she asks, concealing her eagerness. PARELES

Margo Price reaches toward the Nineteen Sixties and the confrontational side of psychedelia with “Change of Heart.” A wiry blues guitar riff and jabs of organ hint on the Doors as Price delivers a breaking-away song that toys with paradoxes: “You run from danger/straight into trouble,” she sings, adding, “Way down deep you’re as shallow as me.” Just to maintain things off- balance, every so often the band adds an additional beat, while a protracted, gradual fade-out suggests she’s still a little bit reluctant to maneuver on. PARELES

It’s now been seven long years for the reason that D.J., producer, and longtime xx member Jamie xx released his beloved solo album “In Color,” but this yr he’s put out two rousing latest singles: first the ecstatic “Let’s Do It Again” and now the elastic “Kill Dem.” Built around a sample of the dancehall great Cutty Ranks’ “Limb by Limb,” Jamie minces his source material into barely discernible syllables and launches it into hyperspace, leaving its component parts to ping off each other with a bouncy, exuberant energy. ZOLADZ

The Comet Is Coming, ‘Pyramids’

The British jazz saxophonist Shabaka Hutchings, who lived in Barbados from ages 6 to 16, is on the core of multiple groups with different lineups. Within the Comet Is Coming, he works with the synthesizer player Dan Leavers, or Danalogue, and the drummer Maxwell Hallett, a.k.a. Betamax, in a zone where electronic dance music and jazz collide. “Pyramids” is from the trio’s latest album, “Hyper-Dimensional Expansion Beam”; the title of this track might allude to “Pyramid Song” by Radiohead, which shares a few of the same ascending yet foreboding chords. Danalogue uses Nineteen Eighties synthesizers for plump bass tones and upward swoops; Betamax mixes drums and drum machines, consistently accenting different offbeats. And along with his meaty tone on tenor saxophone, Hutchings plays a jumpy, dissonant line that’s equally mocking and party-hearty, a bent Carnival shout. PARELES

Within the Nineteen Seventies, the Zambian rock band Witch — an acronym for We Intend to Cause Havoc — fused garage-rock, psychedelia and funk with African rhythms, spurring a movement called Zamrock. The broader world discovered them with the discharge of a 2011 collection, and surviving members of the band — the singer Emmanuel (Jagari) Chanda and the keyboardist Patrick Mwondela — returned to the studio in 2021 backed by international musicians, including the Dutch neo-psychedelic songwriter Jacco Gardner. “Waile,” written in 1978 but not previously recorded, addresses “sorrow and suffering” and the separation of a family. It moves through a percolating xylophone-and-guitar riff, blasts of fuzztone, some brisk African funk and, midway through, a slower lament carried by women’s voices before the beat picks up again and hard-nosed guitar riffs push ahead — undaunted. PARELES

On “Not My Job,” the British girl group Flo update the glittering sound of Y2K pop-R&B with a little bit modern-day therapy-speak: “It’s not my job to make you’re feeling comfortable,” the trio asserts on the chorus. “When you ain’t being vulnerable, that claims all of it.” The blingy sheen, skittering beat and synthesized strings all conjure an aesthetic you’ll have not even realized you were nostalgic for — it’s giving “Case of the X”; it’s giving “The Writing’s on the Wall” — albeit enlivened with a fresh, contemporary twist. ZOLADZ

If Lil Nas X continues to play jester, expertly, on social media — this week, he posted impishly hilarious videos of himself sending pizzas to protesters outside of one in all his live shows, and of his newly minted wax figure FaceTiming his confused friends — his latest single “Star Walkin’” suggests that he remains to be enthusiastic about using his music as an outlet for feelings that complicate that persona, like anxiety, light melancholy and self-doubt. “They said I wouldn’t make it out alive,” he sings defiantly on this gleaming, synth-driven track, which serves because the theme song for this yr’s League of Legends World Championship. The one-off definitely doesn’t rank amongst his most memorable singles, however it’s further proof that he’s found out a reliable sonic formula to show personal apprehension into steely braggadocio; by the tip of the song, he asks, “Why worship legends when which you can join them?” ZOLADZ

Emiliana Torrini attests to the reassurance of a long-lasting relationship in “Right Here”: “Here’s to all of the roads that we’ve been down,” she sings with a smile. “I’m right here by your side.” She’s backed by the Colorist Orchestra, a happily quirky Belgian chamber-pop ensemble that mixes standard instruments with homemade ones — including, for this song, the sound of stone scraping stone. Torrini and the Colorist Orchestra rearranged a few of her older songs on an album they shared in 2018, while “Right Here” previews an LP of latest collaborations due early next yr. There’s pointillistic syncopation from marimba, glockenspiel and pizzicato strings, with a backdrop of sustained chords: the ticktock of on a regular basis minutiae held together by the promise of constancy. PARELES

Shannen Moser recreates a community sing and a hometown band concert in “Oh My God,” from an album arriving next week. In “The Sun Still Seems to Move,” Moser offers theological and existential musings — “I do know that life’s not one linear seamless destination” — over fingerpicking and woodwinds, muscles and hands and breath. The music is thoughtful but determinedly physical. PARELES

Anna B Savage, ‘The Ghost’

The London-based artist Anna B Savage’s devastating latest single, “The Ghost,” derives its power from a gradual accumulation of small, intimate details. “We used to note the identical things: His toenails, that little bug,” she sings to an past love in a trembling low register. “But that modified, you couldn’t see the grave we dug.” Long after the breakup, though, the memory of her ex still lingers. “Stop haunting me, please,” she begs on the chorus, because the austere, piano-driven arrangement suddenly fills up with an eerie atmosphere. It feels like an exorcism — or at the least a craving, last-ditch attempt at one, in desperate hope that it really works. ZOLADZ