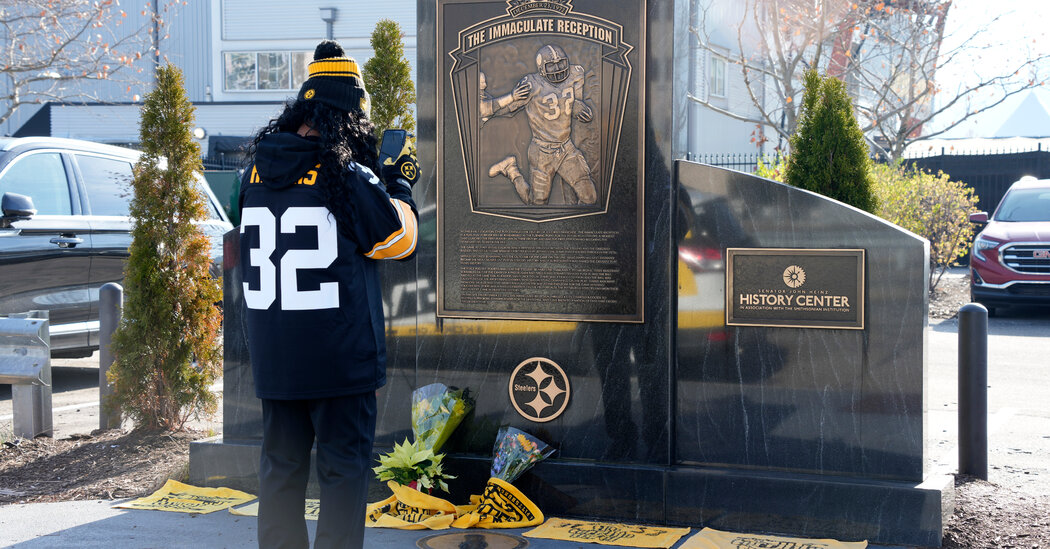 The enduring memory for me is the noise. That, and the customarily forgotten confusion over an obscure N.F.L. rule that just about annulled the “Immaculate Reception.”

The announcement of Franco Harris’s death on Wednesday, just two days before the fiftieth anniversary of the unforgettable play, calls up a swirl of memories for me, some because I used to be within the stands at the sport, some from having been within the Pittsburgh universe then.

Back then, the Steelers’ historic ineptitude was a notable backdrop to that 1972 playoff game. The team had previously made it to the postseason just once in its 40-year history — and that had been in 1947. The Steelers were the Houston Texans of their day.

Luckily for me, my father had seen promise on this version of the team and acquired season tickets, meaning we can be among the many fortunate 50,000 people in Pittsburgh who could watch the sport because it happened.

In those days before the N.F.L. fully boomed in popularity, the league believed live broadcasts in the house team’s city would deter ticket sales — and the rule weirdly applied even to a sold-out playoff game.

The sport was a brutal defensive battle within the December cold, with a scoreless first half. The Steelers built a 6-0 lead on two field goals, but then what had seemed inevitable finally happened: The favored Raiders scored a touchdown with just over a minute left.

The Hall of Fame running back for the Pittsburgh Steelers who caught the “Immaculate Reception” died on Dec. 21. He was 72.

Things looked grim. Friends who got here with us left to beat the gang. (Regrets? They’ve a couple of.)

Thankfully, my father is an enormous believer in staying to the tip. You never know what is going to occur, he says — a lesson he learned after once missing an unlikely finish to a basketball game.

So there we were, standing at our seats in the long run zone behind the play and, like all the opposite Steelers fans, holding only the faintest hope as that desperate fourth-down play unfolded.

Our hopes collapsed when Terry Bradshaw’s long pass bounced away from John “Frenchy” Fuqua and into the air. In my memory, there was a shared groan throughout the stadium.

Bedlam. Harris was running, the gang was roaring, the referees were huddling. Had the ball touched a Raider after it bounced off Fuqua, or had it bounced from one Steeler to the subsequent? The principles on the time didn’t allow a player to deflect a pass to his own teammate, even inadvertently.

It might have taken a daring official to rule the play illegal with a jubilant crowd spilling into the tip zone around him, and in fact the play stood.

Hours later, the broadcaster Myron Cope, himself a beloved Pittsburgh character, took a call from a listener whose friend had christened the play “The Immaculate Reception.” The legend had its mandatory luster.

In a blink, Harris had develop into the prince of Pittsburgh. His fans, playing off his mother’s heritage, labeled themselves “Franco’s Italian Army” and even Frank Sinatra joined their ranks.

The Steelers lost to the Dolphins in the subsequent round, but won 4 Super Bowls in the subsequent eight years. Harris went on to develop into the second-leading rusher in league history, earn induction into the Hall of Fame and see his statue placed next to George Washington’s in Pittsburgh International Airport.

He remained humble, whilst a 22-year-old within the delirious moment of his most famous touchdown. That grace and good will made him all of the more beloved. His army of fans stays, if in unexpected mourning as we prepare to honor the anniversary of the catch that also conjures the considered divine intervention.