Review: A Cellist Accompanied by His Sister. Or Vice Versa? 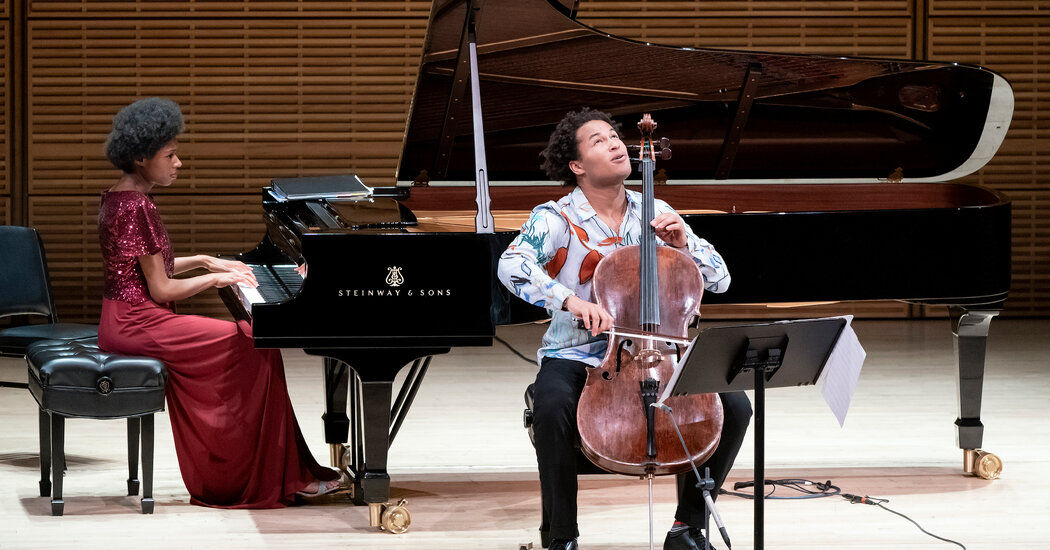 If someone asked you what sort of concert you went to at Zankel Hall on Wednesday evening, you’d probably call it a cello recital. That’s the shorthand for performances by distinguished young string soloists; the standard thought is that they are the essential event. We’d traditionally say that they were simply “accompanied” by a pianist.

But on Wednesday that pianist was Isata Kanneh-Mason. She played beautifully: her touch patrician in a Beethoven sonata; dreamy in a single by Shostakovich; suave in a single by Frank Bridge; and alert without being anxious in a single by Britten. Calmly commanding throughout, she was also unfailingly subtle. You would even say she was accompanied by her younger brother, the cellist Sheku Kanneh-Mason.

I’m joking, after all, but that the Kanneh-Masons are siblings makes it easier to see them as equal partners, and to see the lie within the common notion that the keyboardist is the bit player in another person’s show. The sonata repertoire is usually difficult enough on the piano that the accompanist label seems inadequate. This truly felt like a concert of duets.

Each of those musicians have been rising lately: first Sheku, 23, following his internationally televised appearance on the royal wedding in 2018; and more recently Isata, 25, with a pair of fantastic, quietly progressive albums. They appeared together in 2019 at Carnegie Hall’s smallest space, and returned on Wednesday to Zankel, the middle-size hall, whose 600 seats were sold out. (Is the most important, Stern Auditorium, to return?)

This system was nicely constructed. Bridge was Britten’s teacher; and Britten and Shostakovich are linked, because the Kanneh-Masons said in a recent interview with The Recent York Times, through the advocacy of the nice cellist Mstislav Rostropovich.

Rostropovich also played Karen Khachaturian’s full of life sonata, which the Kanneh-Masons are doing at some stops on their present tour. I wish that they had presented it at Zankel as a substitute of Beethoven’s Cello Sonata No. 4 in C, an intrusion — nonetheless nice — from the early nineteenth century in what otherwise would have been 4 pieces written over just 50 years within the twentieth. As a gap here, it was restrained to the purpose of weightlessness.

In some ways, the primary half of the concert felt like a preparation for the second, with the Shostakovich, after the Beethoven, also floating by with a number of easily threadlike, wispy cello playing — though within the Largo, Sheku’s even keel paid off in some arresting harshness, and Isata was icily lucid within the second movement.

After intermission, within the rarely performed, richly wistful Bridge sonata, these musicians didn’t lose their restraint but gained tension as more extravagant emotion kept spilling past the reserve. The second movement climaxed within the piano’s softly conclusive, consoling line, setting off a spiral of sunshine calligraphy within the cello — a passage of superbly unified playing.

And Britten’s sonata was a match for the Kanneh-Masons’ self-possession, within the gnomic interplay of the primary movement — nearly silent undulating within the cello because the pianist seems to wander, looking for him — and the caroming yet controlled pizzicato of the second. A way of togetherness, of shared sensibility, permeated the entire piece, because it did the entire concert, right down to the understated yet feeling encore, their arrangement, inspired by Samuel Coleridge-Taylor’s, of the spiritual “Deep River.”