Review: A Conductor Takes a Victory Lap With Her Orchestra 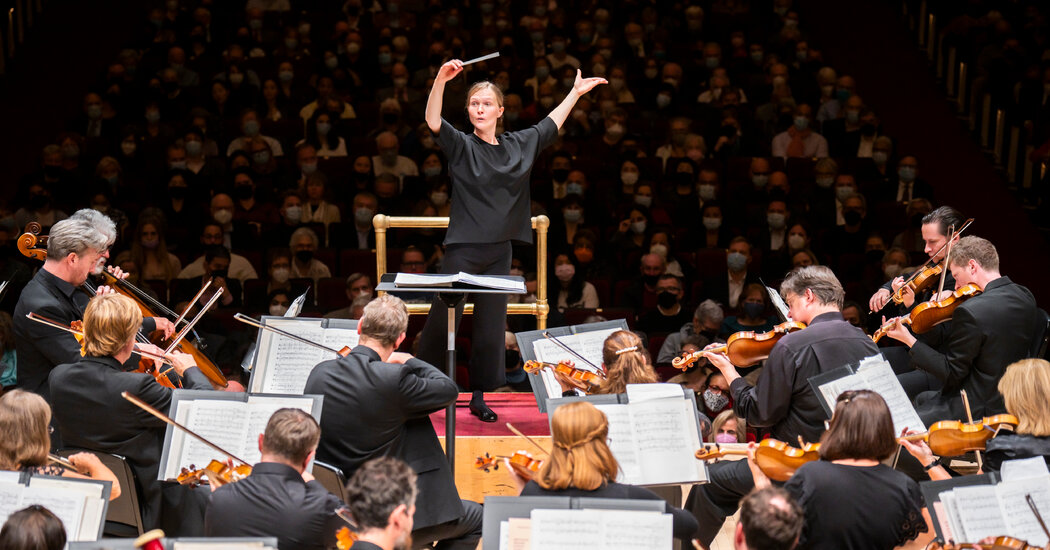 When Mirga Gražinytė-Tyla, a rapidly rising young Lithuanian conductor, announced last 12 months that she would step down from her post because the City of Birmingham Symphony Orchestra’s music director, her statement had the euphemistic wording of a breakup.

“This can be a deeply personal decision,” she said on the time, “reflecting my desire to step away from the organizational and administrative responsibilities of being a music director at this particular moment in my life and focusing more on my purely musical activities.”

But she was being honest: An outlier in classical music, at 36 she would reasonably dedicate time to her own interests and her growing family than be tied to an orchestra. After I met her in January, as she was preparing a recent production of Janacek’s “The Cunning Little Vixen” in Munich as a part of a 12 months dedicated to numerous iterations of that opera, she said lightheartedly, “I’m undecided the large orchestras will likely be thinking about having me if I say I’ll do only ‘Vixen’ for the entire season.”

If more proof of Gražinytė-Tyla’s sincerity were needed, she has also delivered on the ultimate a part of her statement that “we will proceed to make music together in the approaching years.” She is touring with the Birmingham, England, ensemble, now as its principal guest conductor. Considered one of their stops was at Carnegie Hall on Saturday night: a program that was something of a victory lap not just for her six-season tenure with these players, but additionally for the group’s pandemic-delayed centennial celebrations from 2020.

Amongst those celebrations was a series of commissions that included Thomas Adès’s “The Exterminating Angel” Symphony, a four-movement adaptation of his 2016 opera that had its Latest York premiere on Saturday.

“The Exterminating Angel” is certainly one of the good operas of our time — a piece of wicked humor and dark beauty that befits each the 1962 Luis Buñuel film that inspired it and the overwhelming dread and instability we attempt to live with today. (Now, its story of surreal, indefinite imprisonment in a single room comes off as prescient and all too familiar.) The sound world Adès conjures throughout is dramaturgically airtight: shifting harmonies, the eeriness of an ondes Martenot, dense forces of cosmic immensity.

It’s so much to soak up, and there have been few opportunities; “The Exterminating Angel” is an expensive production, with a sprawling principal solid and an orchestra of Wagnerian heft. Adès conducted the American premiere on the Metropolitan Opera in 2017, and given the home’s unreliable continued support of up to date work, nevertheless successful, it’s difficult to assume a revival any time soon.

Thankfully, Adès has made further music from the rating: the solo piano Berceuse, written for Kirill Gerstein, and this symphony, which cleverly echoes the opera without excerpting it. Gone is the eerie ondes Martenot, though it lives on in swinging glissandos within the strings; still intact, nevertheless, is the opera’s excess and horror, made all of the more unsettling by the orchestra’s coolly crisp, virtually objective delivery on Saturday.

The primary movement, “Entrances,” nods on the grotesquerie and layered textures of the opening scene; “March,” from an interlude between Acts I and II, could just as easily be called “Prelude to the Afternoon of a Firing Squad,” with martial terrors harking back to Shostakovich’s eleventh Symphony. The grim lyricism of Adès’s love songs and lullabies returns with one other Berceuse, followed by the finale, “Waltzes,” a rhapsodic assemblage that evolves right into a relentless danse macabre analogue to the opera itself.

Had the symphony not come after an intermission, it might have been a whiplash response to the work that opened this system: Elgar’s sparely orchestrated and infrequently quiet Cello Concerto in E minor, featuring Sheku Kanneh-Mason because the soloist. He’s an expressive musician, who defaults to a large, emotive vibrato — especially in his encore, a harmonious arrangement of Bach’s “Komm, süsser Tod” for five cellists. Gražinytė-Tyla deferred to him because the concerto’s narrator, with modest accompaniment and infrequently blooming grandeur.

And a compelling narrator he was. Kanneh-Mason plays with the seeming spontaneity that may come only from extreme discipline, but additionally a freedom that occasionally slides into flawed intonation. And in a piece as plain-spoken because the Elgar, his elevated articulation was more Shakespeare than, say, the Chekhov it must have been. But all that might be forgiven for the sheer charisma of his performance.

Probably the most traditional showcase of the Birmingham ensemble’s sound under Gražinytė-Tyla was in Debussy’s “La Mer,” which closed the evening in a transparent interpretation that exposed the piece’s wealthy, subtly maximal orchestration. Gražinytė-Tyla’s reading wasn’t essentially the most volatile, but it surely was revealing in its clarity, balancing texture upon texture below a gracefully buoyant melody within the brasses or winds.

Players in every section of the orchestra responded to her gestures — sometimes efficiently small, sometimes evocative of a swerve or plunge — with lived-in ease. Gražinytė-Tyla may not be attached to them full time, but neither is she fully detached. Whatever she has decided to do, to reconcile her own interests with that of this orchestra, it’s working.