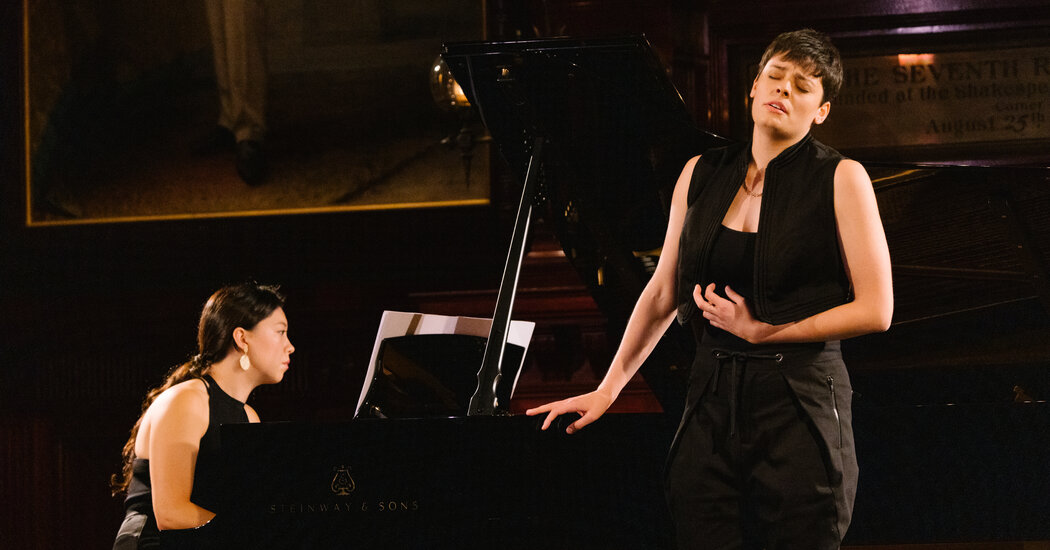 There wasn’t comic relief on offer at Emily D’Angelo’s recital on Friday on the Park Avenue Armory. Not a giggle, not a wink. Her rare smile through the performance was wistful. The topics she sang about were, for essentially the most part, longing, death and tears.

As a substitute of leavening the gravity, D’Angelo, joined by the pianist Sophia Muñoz within the Armory’s Board of Officers Room, doubled down. Her program was like her mezzo-soprano voice: a flood of melancholy, molten but articulate.

Rarely, though, is it so pleasurable to linger in a lot pain. The event — D’Angelo’s first American solo appearance — gave a small audience the treat of an intimate encounter with one in all the world’s special young singers.

Still in her 20s, and emerging on the international scene just previously few years, D’Angelo has a wealthy, mellow voice, an encompassing serenity and confidence. But with a slight press on the gas her tone turns stern and flashing, almost scary. In “I’ve Heard an Organ Talk Sometimes” — one in all her three selections from Aaron Copland’s “12 Poems of Emily Dickinson” — her sound really did tackle organlike amplitude.

The primary half of her program borrowed some numbers from her debut solo album, “Enargeia,” released last 12 months — but now in recent company, just like the two austere songs by Schoenberg that followed Hildegard von Bingen’s “O frondens virga,” a sober introduction.

But while on “Enargeia,” lush, woozy instrumental arrangements turned a few of the tracks lugubrious, on Friday, with just Muñoz’s gentle, sensitive piano accompaniment, they felt each more restrained and more affecting, D’Angelo’s voice much more direct. Shorn of its recent age-y trappings, Sarah Kirkland-Snider’s “Nausicaa” was a consolatory prayer, and two Missy Mazzoli pieces smoldered without being too heavy.

There was nothing affected about her singing or her presence. D’Angelo wore a black vest over a sleeveless top with drawstring pants and a pixie haircut, looking a bit Peter Pan and a bit Joan of Arc. Her hand resting on the sting of the piano’s curve, gently leaning into the instrument, she had the casual assurance of an experienced cabaret artist.

So it wasn’t surprising to search out she also has a present for pull-up-a-chair storytelling, whether in Randy Newman’s “Wandering Boy” or Rebecca Clarke’s “The Seal Man” — the words clear without being overenunciated, her manner patient, as if she had on a regular basis on this planet. She was superb in Cecilia Livingston’s monologue “Penelope,” in its 2020 version for mezzo, which starts with a watery tremble within the piano and moves to a series of slow-burning, sometimes fiery questions: “What’s it to be waiting? What’s it to be waiting for you?”

Near the top got here a series of nocturnes — here true premonitions of death — by Clarke, Fanny Mendelssohn and Florence Price. Before D’Angelo’s encore, a glowing account of the Dvorak chestnut “Songs My Mother Taught Me,” she closed the written program with Clara Schumann’s “Lorelei,” about that folkloric temptress.

The Heinrich Heine poem that Schumann sets describes the Lorelei’s singing as “wundersame, gewalt’ge”: wondrous and powerful. D’Angelo’s is, too.

Performed on Friday on the Park Avenue Armory.