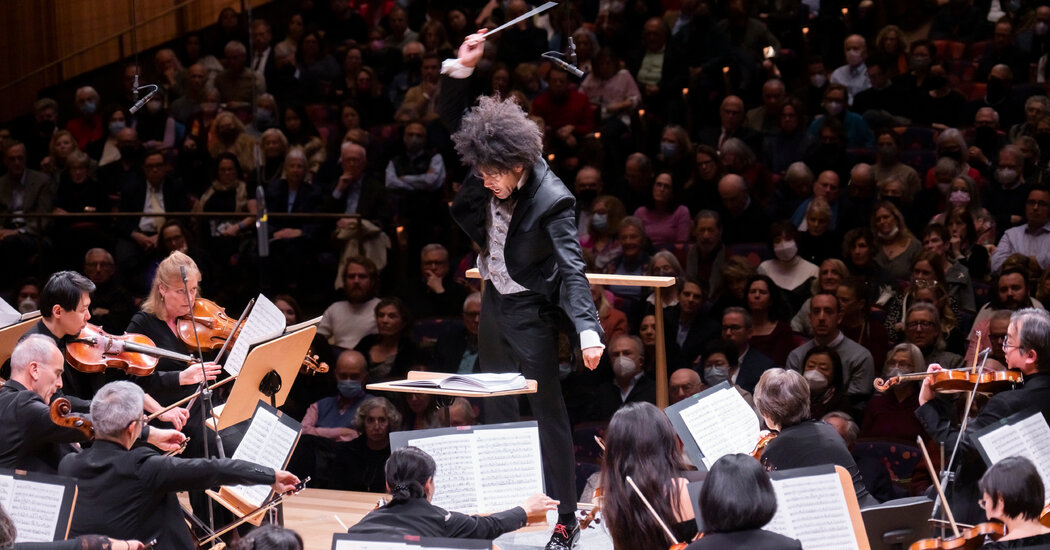 Beethoven’s Ninth, after all, is at the middle of the repertory, while Shostakovich’s twelfth, “The 12 months 1917,” had never been played by the Recent York Philharmonic before Thursday, when it was a vehicle for the conductor Rafael Payare’s debut with the orchestra at David Geffen Hall.

Why has this symphony been neglected? Shostakovich’s repute within the West, even after the Cold War ended, was founded on a way of him as a type of dissident of the center, his music covertly against the Soviet regime he outwardly served — or a minimum of attempted to make peace with.

But it surely’s hard to seek out ambivalence or coded irony within the twelfth, which tells a triumphal tale of the Russian Revolution of 1917 and is devoted to that struggle’s hero, Lenin. It premiered in 1961, a 12 months after its composer finally joined the Communist Party. (How willingly he joined is one in all the numerous questions that persist, unanswerable, about his true beliefs, and so concerning the relationship between his music and the harmful political situation he faced.)

Unlike his eleventh Symphony from a couple of years before, into which some read secret sympathies with the 1956 anti-Soviet rebellion in Hungary, there appears to be little within the twelfth but positivity; even in quieter moments, blazing victory is rarely far-off. I suppose the dark undercurrent that briefly pursues Lenin in his countryside hiding place outside St. Petersburg within the second movement could also suggest the fear Shostakovich may need felt. But here, that looks like a reach.

The twelfth wouldn’t, at this point, should be disqualified from programs merely for being sincerely created propaganda — though I wouldn’t follow this system note’s glib assurance that we are able to forget the historical context, since “‘The 12 months 1917’ was over a century ago, and the Soviet Union is gone.” Tell that to the present president of Russia.

It was beneficial to get a probability to listen to this symphony live, nevertheless it does come off a bit repetitive and thin, nonetheless wearyingly loud and dense it gets. You won’t need to hear that earworm central tune again.

In 40 minutes — its 4 movements flowing together without pause, and revolutionary songs quoted liberally throughout — the piece depicts a Petersburg (then Petrograd) simmering with chaos and tension, ready for battle; then Lenin’s retreat to plan his next move; the thunderous starting of the revolution; and “The Dawn of Humanity,” the fortissimo, major-key utopia of Soviet life.

It’s not the fault of Payare, 42, the music director of the San Diego Symphony and the Montreal Symphony Orchestra, that it’s difficult to construct tension in those final 10 minutes or so, which manage to be each relentless and fitful.

His neat, spirited rendition of the work didn’t stint the mellower second movement, through which successive solos — the bassoonist Judith LeClair, the clarinetist Anthony McGill, the trombonist Colin Williams — advanced an environment of doleful meditation. The Philharmonic appears to be steadily acclimating to its newly renovated hall, though the brasses remain extremely bright-sounding at full force, sharpened reasonably than golden.

Because the orchestra’s music director, Jaap van Zweden, usually shows, a conducting style that matches the punchy extremity of Shostakovich will not be at all times right for Beethoven, whose Piano Concerto No. 2 was overemphatic and sluggish on Thursday, particularly in a plodding Adagio. The veteran soloist, Emanuel Ax, appeared to be looking for a middle ground between his pearly geniality and Payare’s starker phrasing, and the outcomes sounded unsettled. Ax seemed more suavely comfortable in his encore, Liszt’s arrangement of Schubert’s “Ständchen.”

The concert opened with one other Philharmonic premiere, William Grant Still’s brooding “Darker America” (1924), an ambiguous, 13-minute dreamscape of haziness, low-slung blues and a subdued conclusion.

This was the primary time the orchestra has put Still’s work on a subscription program in over 20 years, and it is going to be followed in March by his Symphony No. 2, “Song of a Recent Race.” To listen to a lot latest to this ensemble — even Beethoven’s Second, while hardly a rarity, might be the least played of his piano concertos — is a heartening sign of searching artistic leadership.