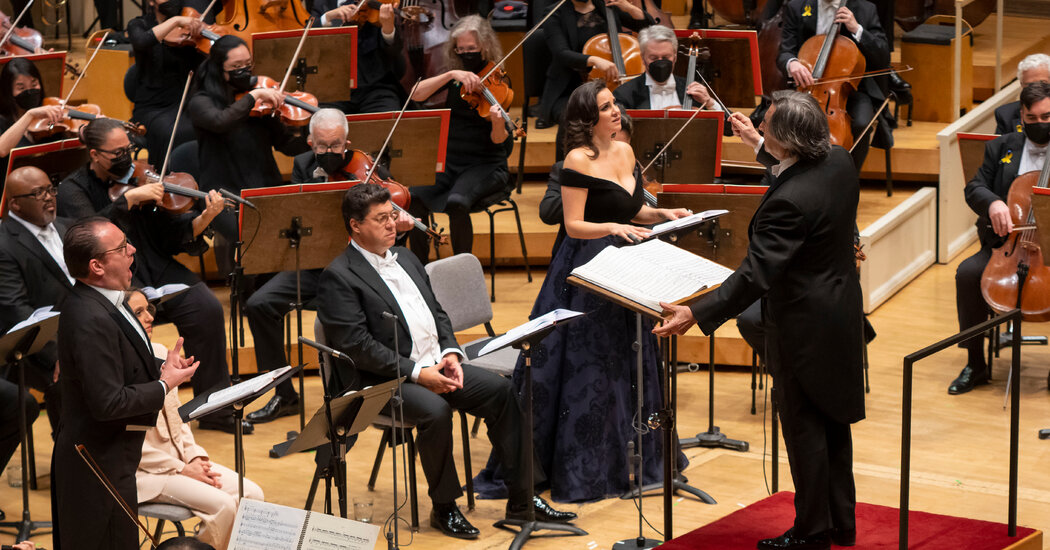 Especially memorable on Thursday were the understated eloquence of John Sharp’s cello solo during Amelia’s aria “Morrò, ma prima in grazia,” and the spine — sometimes strong, sometimes shadowy — provided by the timpanist David Herbert. “Ballo” is filled with simmering quiet, from which the total orchestra was able, again and again, to suddenly explode with savage, Mutian precision.

The Chicago Symphony Chorus — prepared by Donald Palumbo, here for a stint after the top of the season on the Metropolitan Opera, where he’s the chorus master — sounded richly massed, and sometimes terrifyingly robust, but not turgid. Even forceful phrases didn’t cut off abruptly; consonants and vowels alike felt rounded and full.

Best among the many featured singers were the mezzo-soprano Yulia Matochkina, commanding because the soothsayer Ulrica, and the soprano Damiana Mizzi, sprightly but silky because the page Oscar, a rare Verdian trouser role. The baritone Luca Salsi was an articulate, occasionally gruff Renato. The tenor Francesco Meli — like Salsi, a Muti favorite — was brash and ringing as Riccardo; his generosity faltered only occasionally on the very top of his range.

When the accompaniment was spare and the vocal line floating, the soprano Joyce El-Khoury sang Amelia with soft-grained delicacy, though her tone narrowed as more pressure was placed on it. Together with her sound brooding, she effectively projected her character’s pitifully unmitigated sorrow. But she and Meli were pressed to their limits by the ecstatic end of their Act II duet.

However the star of the show was never unsure. This was not Muti’s final performance in Chicago, not by an extended shot. There was nevertheless special poignancy near the top, hearing — from the voice of a personality named Riccardo, no less — a dying farewell to “beloved America.”