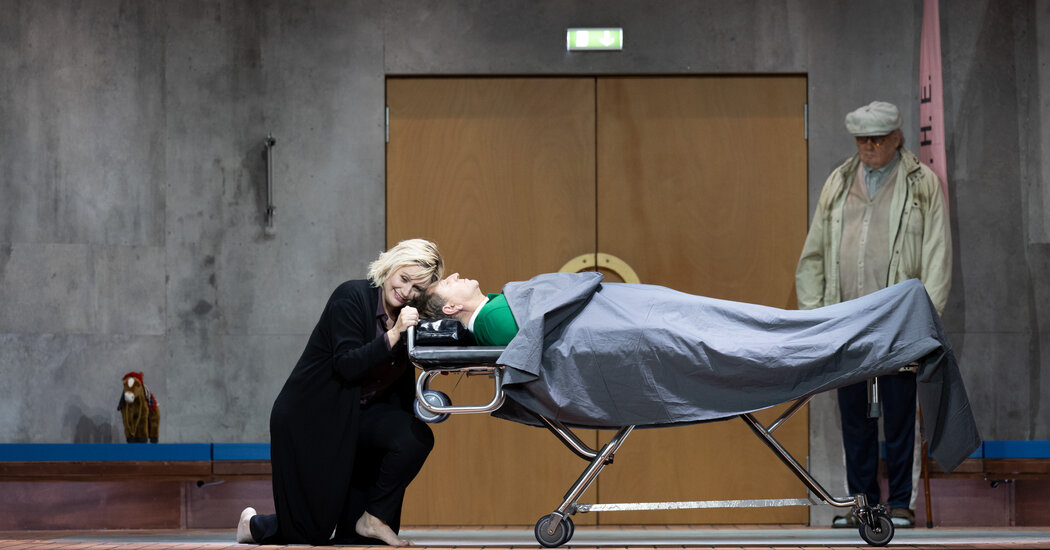 BERLIN — These days, the German capital has been looking more like a city to the south: Bayreuth.

Not less than in a single respect. The Berlin State Opera, in mounting Wagner’s four-part “Der Ring des Nibelungen,” has taken Bayreuth’s approach — begun by the composer himself — of presenting all of it inside per week. Most houses construct to that marathon slowly, sometimes over the course of several years, but Berlin has unveiled a whole production directly, with the primary cycle ending Sunday night.

It’s an infinite undertaking — 15 hours of music to be staged and rehearsed by a few hundred performers — especially for a busy repertory house just like the State Opera. But this recent production, a myth-busting and subtly provocative take by Dmitri Tcherniakov, was designed for an important day: the eightieth birthday of Daniel Barenboim, the corporate’s long-reigning music director and a titan of Berlin culture.

Barenboim’s health, though, has deteriorated in recent months, and he withdrew from the premiere. In his stead got here Christian Thielemann, one in all only a few conductors to have led all 10 of Wagner’s mature operas at Bayreuth. He hasn’t much experience with the State Opera’s orchestra, the Staatskapelle Berlin, but after his first “Ring” with them, he suddenly looks like a worthy contender for its podium when Barenboim eventually steps down.

The Staatskapelle executed Thielemann’s vision for the “Ring” — a protracted crescendo built over the 4 operas — with sensitivity and skill. His tempos, slower than usual, tested the stamina of singers, but he also had a keen sense of balance, scaling his sound to match theirs onstage. This was an often quiet ring, a near opposite of Georg Solti’s famous (and ever-elevated) studio recording from the mid-Twentieth century with the Vienna Philharmonic. It did, though, reward patient listeners, with Thielemann concurrently shaping the rating on the extent of scenes and the immense entirety.

He also had a present for illustrating the representative moments in Wagner’s rating: sheets of rain within the opening of “Die Walküre,” or the idyllic forest murmurs at the center of “Siegfried.” Those, because it happened, were concerning the only glimpses of nature in Tcherniakov’s “Ring,” which not only demythologizes the work — just like the contemporary-dress family drama presented at Bayreuth last summer — but additionally isolates its characters in a world so human, it’s constructed by their hands and cut off from the skin world.

Talk over with anyone who saw this “Ring,” and also you’re unlikely to listen to the identical response twice. It’s telling, and satisfying, that the State Opera auditorium was divided in boos and cheers for Tcherniakov through the curtain call for “Götterdämmerung” on Sunday. There didn’t appear to be a passive listener in the home.

Wagner’s sprawling, dramaturgically imperfect work — a multigenerational power struggle amongst gods, creatures and men — has been interpretive fodder for nearly 150 years. In his book “The Perfect Wagnerite,” George Bernard Shaw argued that the “Ring” was a Marxist epic; so did the director Patrice Chéreau in his benchmark centennial staging at Bayreuth.

Tcherniakov offers an original reading on the “Ring,” one which departs severely from Wagner but with a story just as wealthy — unfurling in a difficult, at times obtuse production that defies quick judgment and demands curiosity. The plot doesn’t map onto the libretto, yet just like the text, it’s many things directly: commentaries on the risks of playing god; the bounds of information and science; the evolution of sexual politics; generational conflict; even the ways during which a renovation can destroy historical architecture. Funny and aching, ironic and horrifying, it’s, nevertheless irreverent, loyal to the “Ring” as a piece of novelistic complexity.

Here, the 4 operas unfold inside the partitions of a Cold War-era research center called E.S.C.H.E. (Esche is the German word for ash tree, which in Wagner’s text is mutilated within the name of power, and withers in parallel to the autumn of the gods.) It’s an enormous facility; the curtain is a blueprint of the third floor, which alone incorporates 185 rooms. The production’s program refers to Wagner’s lifetime as a golden age of experimentation — sometimes world changing, sometimes perverse. So were the post-World War II years of arms races and scientific pipe dreams, when the story of this “Das Rheingold” begins.

The sort of experimentation that takes place at E.S.C.H.E. becomes clear inside the opening minutes, during which people gather in a lecture hall to look at a video (by Alexey Poluboyarinov) of a liquid being injected right into a brain, stunting neural pathways as they’re being formed. That’s the least of the unnatural acts to return.

Wotan, the ruler of the gods — Michael Volle, the production’s high point as a commanding baritone and actor of remarkable range — oversees a kingdom of inquiry into the human mind. Subjects undergo stress tests or are manipulated into love and violence for the sake of commentary. In a world where all the pieces is an experiment, nothing emerges as reliably real.

The ring is just not a physical object a lot as the thought of information as power. Scenes that may typically be highlights of stage magic — the crossing of the Rainbow Bridge, the blaze that surrounds a sleeping Brünnhilde, the flooding of the Rhine — don’t exist as such in Tcherniakov’s staging, except with unnecessarily winking substitutes. And there isn’t such a high body count; most characters make it to the tip of this “Ring” alive.

Tcherniakov, as usual, manages details on a level rarely seen in opera. Most impressively, his characters perform to one another slightly than on the audience; with no sound, the motion could still communicate its essentials. The soprano Vida Mikneviciute, mighty yet fragile as Freia in “Das Rheingold” then Sieglinde in “Die Walküre,” wears years of emotional and physical abuse in her facial expressions and wincing reflexes; Lauri Vasar’s Günther, a boss made right into a cuckold in front of his colleagues in “Götterdämmerung,” looks back at one in all them with an uncomfortable, sympathetic smile; Claudia Mahnke’s Fricka is a desperate wife who, resigned to a bitter relationship with Wotan, gestures cruelly for him to maintain the pen she lends him to sign away Siegmund’s fate.

Elsewhere, the forged performs with laugh-out-loud physical comedy, especially Rolando Villazón, nevertheless effortful within the unlikely role of Loge. This “Ring” can be an office sitcom if its subtext weren’t so appalling. Tcherniakov traces E.S.C.H.E.’s existence over a half-century or so, starting within the Nineteen Seventies and reflected in Elena Zaytseva’s grounding costumes. The place is rotten from the beginning, seemingly built with dirty money by Fasolt (Mika Kares, who returns in “Götterdämmerung” as a wickedly resonant Hagen) and Fafner (Peter Rose, who comes back in “Siegfried” not as a dragon, but as a psych patient in a straight jacket).

That original sin serves the plot lower than it normally would; more necessary is Alberich’s theft of “gold.” Later scenes suggest that he’s an worker at the middle, but one who submits to a stress test and breaks under pressure, violently removing the sensors from his head and running out of the lab with as much data as he can carry. He — Johannes Martin Kränzle, a characterful foil to Volle’s Wotan — forms his own dominion of research within the subbasement.

Wotan seems to be the supreme schemer, though, slightly than on an equal level along with his rival as written: his “Light-Alberich” to the dwarf’s “Black-Alberich.” By “Götterdämmerung,” Alberich — aging throughout the cycle like everyone else — seems to have died, existing only within the mind of Hagen, whereas Wotan appears in all 4 operas, as a substitute of the standard first three. His cameo at the tip, during Brünnhilde’s Immolation Scene, is where Tcherniakov’s production snaps into focus; much of her monologue, delivered by the soprano Anja Kampe with equal parts anguish and revelation, is an indictment of Wotan sung directly at him, in a reversal of the ultimate scene of “Die Walküre.”

It’s almost as if, like Wagner, Tcherniakov began there, with Siegfried’s death, and worked backward. If you happen to follow that thread, you see his “Ring” as a series of missteps and misplaced priorities. The primary two operas exist to establish Wotan’s ultimate test subject: Siegfried, born in the middle and raised under constant surveillance. And throughout, Erda (Anna Kissjudit, as assertive as Volle) appears at pivotal moments, along along with her three Norns, dispassionate witnesses to Wotan’s folly.

Not all the pieces adds up. As is commonly the case with Tcherniakov, you get the sensation that he ran out of time. He introduces an actual ring in “Götterdämmerung,” but since it serves a standard purpose as an emblem of fidelity, it doesn’t make sense as an object of everyone’s obsession; also made literal are the sword Nothung and Wotan’s spear, their powers mysterious and irrelevant in a world without magic.

But where successful, Tcherniakov’s approach is thoughtful, if rending. He shows how, from the Nineteen Seventies to the current, women have risen from casual workplace cruelty to precarious power; but additionally how abusive relationships will all the time take form in ways like Brünnhilde’s neglect by Siegfried (a tireless, crowd-pleasing Andreas Schager), which drives her to depressive behavior and possibly alcoholism. And Tcherniakov demonstrates, through his own scenic design and lighting by Gleb Filshtinsky, how easily history will be taken without any consideration or erased, whether Wotan’s legacy or the architecture of E.S.C.H.E.

Because so few characters die, they’re left to live with their mistakes, and maybe to perpetuate them for so long as the middle stays open. But all “Ring” productions must have a component of renewal, and here that’s granted to Brünnhilde, sung by Kampe with a heroic but smaller sound than other sopranos within the role. As an alternative of greeting the flames of Siegfried’s funeral pyre, she walks out of the ability with a bag in hand. On the empty stage’s back wall, Tcherniakov projects Wagner’s Schopenhauer-influenced version of the Immolation Scene that he never set, during which Brünnhilde describes fleeing from the world of delusion, enlightened and having seen “the world end.”

She’s tempted by Erda, who flaps the wings of a toy bird in her hand. But Brünnhilde won’t be fooled. She leaves all of it behind, pulling the curtain down behind her — without the knowledge her colleagues so carelessly pursue, perhaps, but with wisdom.

Through Nov. 6, nonetheless in April, on the Berlin State Opera; staatsoper-berlin.de.