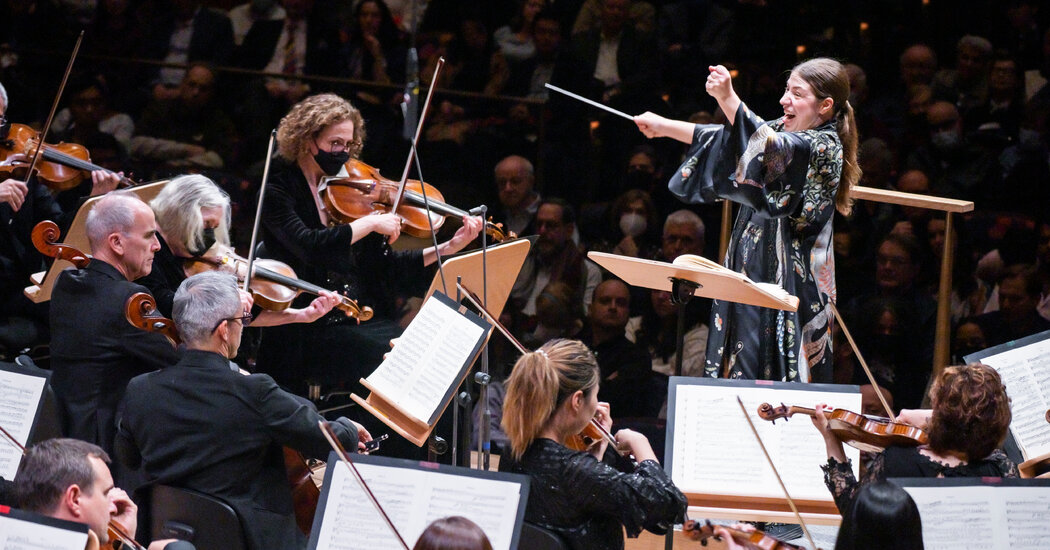 The opening of the Recent York Philharmonic’s concert on Friday took a step toward solving one problem while exposing one other.

Wang Lu’s “Surge,” given its world premiere at the highest of the show, is the product of an initiative by the League of American Orchestras to commission latest works from six composers — all women — that will probably be guaranteed performances from ensembles across the country.

To this point, so good. Too often, premieres have short rehearsal periods; then, unless future performances are lined up, or unless soloists champion concertos written for them, the music can easily disappear. The League’s project at the least gives contemporary work a fighting probability at longevity.

I hope, nevertheless, that the opposite premieres to return out of this initiative don’t have the running time of “Surge.” At a mere six minutes, it was shorter than all but one movement within the classics that followed at David Geffen Hall on Friday: Tchaikovsky’s Violin Concerto and Sibelius’s Second Symphony.

Larger commissions are actually possible. Per week ago, Anna Thorvaldsdottir’s “Catamorphosis” took up the primary 20 minutes of the Philharmonic’s program; last season in Los Angeles, a complete evening was given over to Thomas Adès’s 100-minute “Dante.” Imagine the League’s group of orchestras nurturing music on the dimensions of symphony. Then they may tackle what is maybe the issue of world premieres: that, as transient curtain-raisers unrelated to the remainder of a concert, they have an inclination to only read as perfunctory exercises in box-ticking.

That said, Wang’s piece has the weather of an unlimited rating skillfully accordioned into the form of a much smaller one. From the flourish of its first measure, “Surge” is a restless succession of swinging gestures, martial flashes and exercises in disparate, assertive voices coming out and in of focus, then occasionally finding common ground in a tutti mass. All of it had the texture of a TikTok binge: an infinite and entrancing stream of much of the identical briefly, barely different bursts. The music ended before it became exhausting — but, like TikTok, left you wanting more.

At the rostrum was Dalia Stasevska, in her second appearance with the Philharmonic. Her debut last season proved her bona fides in contemporary music, with a whirlwind trio of works by Missy Mazzoli, Anthony Davis and John Adams. Friday’s premiere was equally impressive; Stasevska led the Wang with verve, commitment and, above all, clarity (despite distractingly wide-armed conducting mannerisms that might qualify as a cardio workout).

The remainder of this system was one other form of test: standard repertory. For the Tchaikovsky, she was joined by the Georgian violinist Lisa Batiashvili, in characteristically elegant and modestly electrifying form, with a focused, penetrating sound. On this piece, the orchestra mostly plays a supporting role to the singingly Romantic solo part. But ensemble moments were nevertheless distinct; the introduction alone looked as if it would inhale and exhale its phrases, and the cellos’ freely beating fifths within the finale set the tone for the rubato and joyously dancing liveliness that Batiashvili has previously delivered to folk-inflected music by the likes of Szymanowski.

It was the form of performance that, without attempting to, had audience members roaring with applause after the primary movement, then, at the tip, immediately rising for a standing ovation — one of the passionate I’ve heard at Geffen Hall this season. They’d the same response to the Sibelius, which here was anxiously brisk and infrequently furious.

The symphony can come off as an exercise in motivic obsession on the extent of Beethoven’s Fifth, and even has that work’s form of a soaringly ecstatic finale. But Stasevska’s heavily opinionated interpretation was unusual from the beginning; the slurred tenuto phrases of the strings, quite than gentle waves approaching a shore, were a ride along a bumpy road. With a liberal treatment of tempo markings, passages were pushed and pulled, some relished and others simply rushed. The last movement was an uncertain triumph, with a suggestion of continuous struggle, until Stasevska savored the radiance of the closing measures’ chords.

Throughout, it was difficult to avoid seeing this idiosyncratic account as a private one. Stasevska lives in Finland but was born in Ukraine, which she has been fervently supporting — through fund-raising, through driving trucks filled with supplies across its border — since Russia’s invasion nearly a yr ago. Batiashvili, too, has long been outspoken against Russia and the classical musicians who’ve benefited from its leadership, especially the conductor Valery Gergiev. On Friday, she performed wearing a gown within the stark blue and yellow of the Ukrainian flag.

Tchaikovsky’s Violin Concerto was written within the glory days of Imperial Russia — an empire that included Finland as a grand duchy subjected, by the point Sibelius’s Second Symphony premiered in 1902, to severe policies of Russification. Sibelius denied as much, but listeners heard on this work an outcry for national pride and independence. To them, the music could never be met with a neutral response. And it’s just as inconceivable to have one to Stasevska, neither to her life nor to her passionately argued performance.