Review: ‘Every little thing I Need I Get From You,’ by Kaitlyn Tiffany 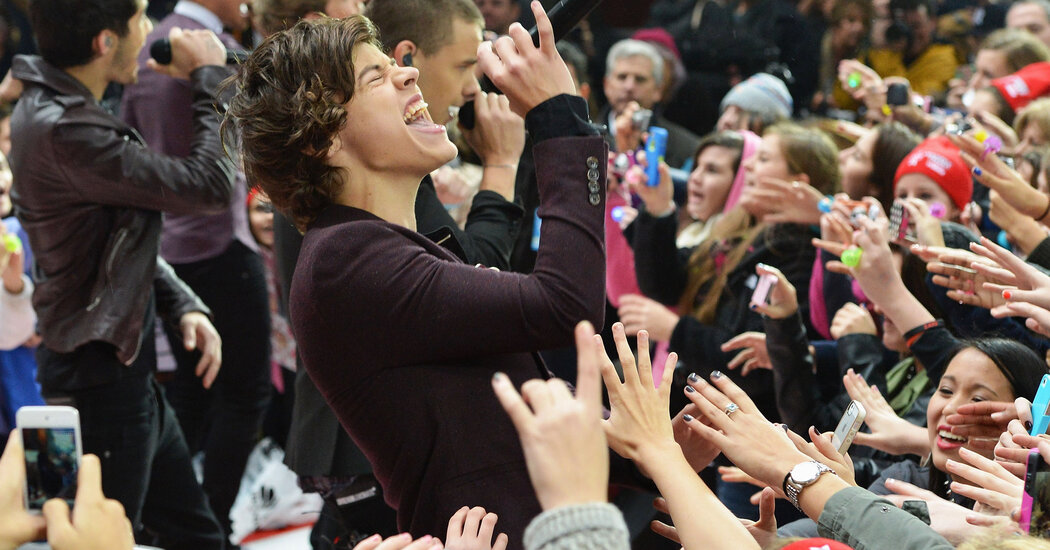 EVERYTHING I NEED I GET FROM YOU: How Fangirls Created the Web as We Know It, by Kaitlyn Tiffany

One Direction was a British boy band that was cynically assembled for the fact television competition “The X Factor” in 2010, and went on to release five albums of catchy if unremarkable pop songs before happening indefinite hiatus in 2016. (For reasons which are somewhat mysterious even to myself, I really like the band.) As the web culture reporter Kaitlyn Tiffany charts in “Every little thing I Need I Get From You: How Fangirls Created the Web as We Know It,” the band’s cultural impact might need been unexceptional were it not for its fans, who built a bizarrely powerful online community featuring subversive fan-fiction narratives, absurdly funny memes and sometimes distressing coordinated campaigns that grew so influential they managed to destabilize “1D” itself.

Tiffany counts herself as a fan (she is similar age as Harry Styles, the band’s youngest member), though she approaches her subject with a wry critical distance — which is definitely, she argues, an underappreciated but common fan characteristic. It’s a persistent sexist attitude that flattens the fangirl’s perspective into inarticulate shrieking. “Though the criticism of fangirls is that they turn out to be tragically selfless and one-track-minded,” Tiffany writes, “the evidence available all over the place I look is that they turn out to be self-aware and creatively free.” She argues that One Direction’s blandly corporate beginnings formed an inviting blank canvas for the band’s fans, who marshaled their generative powers to challenge the music industry’s scripts about what women and girls want — or just to amuse themselves. Following internecine fandom battles, Tiffany writes, could be “vicious and exhilarating, like college football except interesting.” She tracks down one fan who was ridiculed on television for making a “shrine” to a spot on the 101 freeway where Styles once vomited and finds the young woman perplexed on the media freakout over “a comedy routine she was performing, primarily with herself because the audience.”

Through data points like these, Tiffany traces the shifting status of fangirls within the culture at large — once dismissed as hysterical teeny-boppers, they were later rehabilitated by the empowering winds of poptimism before stan culture complicated their role yet again, establishing pop music fans as among the many web’s strongest and feared operators. The 1D fandom would eventually splinter along two lines — those that consider that Styles and his bandmate Louis Tomlinson are secretly in love and who’re obsessive about “proving” the reality; and people who consider that it’s an inappropriate thing to aggressively insist on a story line about real people in a band you ostensibly love. The conflict culminated in a 2016 conspiracy that Tomlinson’s newborn baby was, preposterously, fake.

The Dreamy World of Harry Styles

The British pop star and former member of the boy-band One Direction has grown right into a magnetic and provocative performer.

However the fandom taketh away, and the fandom giveth: Tiffany is at the peak of her powers when she is describing, with touching specificity, why it’d make sense for an individual to speculate serious money and time right into a bunch of cute boys singing silly love songs. She contextualizes fandom as a culturewide coping mechanism and inventive outlet; it may possibly be a lifeline for a lonely and powerless teenager, a site of reflection for a middle-aged mom or an exquisite excuse for anyone to scream into the void. Ten years after she discovered the band, Tiffany’s favorite 1D inside joke — “We took a chonce”; should you know you realize — still “smacks me with a lingering hit of dopamine,” she writes, “like a gumball-machine-sticky-hand landing on a windowpane.”