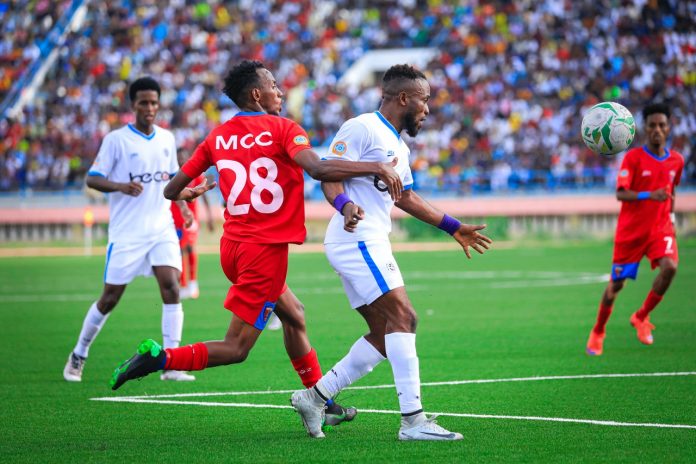 Ever asked who are the top 10 richest footballers in Nigeria today as of 2022? In this article, we’ll share with you the net worth of the richest Nigerian footballers.

Football is without a doubt one of the most lucrative occupations in the world, and the players who participate in the sport are paid enormously for their efforts.

The bulk of Nigerian footballers who are among the country’s wealthiest sign weekly contracts that are extremely lucrative.

Exorbitantly high wages for professional footballers are sometimes seen as an indication of a lack of appreciation for the amount of effort these players put in for their compensation.

Nigerian players have been able to establish themselves as vital components of their respective teams in some of the world’s most prestigious football tournaments.

It’s because they practice their trade at these exclusive clubs that they can command huge salaries and bonuses. As a result, the question of Nigeria’s richest footballers emerges.

Top 10 Richest Footballers In Nigeria 2022 And Their Net Worth

Our focus in this article will be on some of Nigeria’s most notable and highest-paid footballers in history, both on and off the field.

Mikel Obi is the richest footballer in Nigeria, with a current net worth of $61 million.

He’s been a captain for the Nigerian national team for a long time and is known for his devotion to the squad.

In addition to his many accolades with the national team, he won a silver medal at the 2013 African Cup of Nations and an Olympic silver medal in 2012.

Aside from the numerous trophies and awards he’s won with his club, his achievements are undoubtedly something to be envied.

As the most successful Nigerian player and one of Africa’s richest footballers, he is often considered the best in the world.

As a result of his success at the club and on the international stage, he amassed a sizable fortune through weekly salaries and bonuses.

In addition, he is yet to be outdone by anyone on this list in terms of his achievements. Odion Ighalo is second on the list of the richest footballers in Nigeria, and no doubt one of the most valuable players.

When he joined Manchester United on loan from China, he finally hit his peak as a professional footballer.

It was an offer he couldn’t refuse when Manchester United came knocking on his door because of his love for the club long before he became an official footballer.

Since his beginnings at Julius Berger in Lagos State, Ighalo’s career has been nothing short of a success tale.

With all due respect to his dedication and hard work as a sports professional, he’s moved from one team to the next over the course of a long career.

Also, Odion Ighalo is one of the country’s highest-paid players. He became a key member of Manchester United’s first team before sealing a permanent move to Al Shabab and finally Al Hilal where he has bagged a total of 17 goals in 16 appearances. He’s truly blessed in every way.

At the international level, Ighalo has represented his dear country 37 times, scoring 16 goals in total.

Obagoal is a Nigerian football legend for the last two decades.

For his time at Inter Milan, he is best known for his pace and ability to score goals with the ball near to his foot.

He won the Italian Serie A, the Italian Cup, and the Italian Super Cup during his stay with the club. With 28 goals in 5 years and another 3 years in the English Premier League with Newcastle, he left the club.

After graduating from Newcastle youth ranks, he embarked on a worldwide tour. Wolfsburg, Rubin Kazan, Birmingham City, Levante, and Seattle Sounders are just a few of the clubs he has played for.

He has a respectable net worth and is clearly one of Nigeria’s wealthiest footballers. He currently plays for Shanghai Shenhua F.C. of China.

Victor Moses is worth $26 million, making him one of the richest footballers in Nigeria.

Chelsea fans revere Moses because he played right-wing-back for the club and helped them win the English Premier League.

His football career started out slowly, with spells at Crystal Palace, Wigan Athletic, and Stoke City before sealing a move to Chelsea and becoming a popular fan favorite there.

The fact that he was able to maintain a steady income despite changing clubs multiple times is a plus.

Fenerbache loaned Victor Moses to Inter Milan, where he has been playing on loan since the summer of 2019.

Inter Milan finished second in the league, with his assistance to champion Juventus. If you have a career like this, you deserve to be one of the richest Nigerian footballers today. Currently, the Nigerian International is plying his trade at FC Spartak Moscow. Ahmed Musa is fifth on the list of the top 10 richest footballers in Nigeria. A Nigerian international footballer’s record for most goals scored is now held by him following his two-goal outburst in a World Cup match in 2014.

The 2013 African Cup of Nations winning team included him as a player. Many Nigerian footballers aspire to match the accomplishments of their country’s national team.

His club career has been fantastic, even though he started out on the local level.

Having moved from CSKA Moscow to Leicester City, he reached the height of his football career. Al-Nassr, a Saudi Arabian football team, has signed him.

At the 2021-22 African Cup of Nations held in Cameron, Ahmed Musa was part of the squad that participated in the tournament although the Super Eagles were shown the exit door at the round of 16 where they were humbled by Tunisia.

As a member of the Nigerian national team, Emenike was instrumental in helping the squad win the 2013 African Cup of Nations in South Africa.

The players at the time agreed that his commitment to the national team was unsurpassed.

While his national team career may have been more spectacular than the club career that saw him travel from Delta Force, one of Nigeria’s richest states, to a South African club known as Mpumalanga Black Aces, it’s hard to deny that his club career was less glamorous.

He stayed at the club for a year before moving on to the Turkish first league, where he played for Karabukspor.

During this time, he was noticed by some of Europe’s more middling teams.

A match-fixing scandal at Fenerbache prevented him from playing for the club after he was purchased in the summer of 2011.

After that, he was moved to CSKA Moscow of the Russian Premier League. Emenike is still without a club, yet he is already one of the richest footballers in Nigeria.

Victor Anichebe is a rare breed of Nigerian footballer, having come up through the ranks of the country’s premier youth clubs.

He had a promising start to his career with the Everton first team, but a harsh tackle from Kevin Nolanup in a league game ended it.

He was forced to miss the rest of the season as a result of this savage hit. As a result of his career-ending injuries, he decided to file a lawsuit against Nolan.

In the end, they agreed not to go to court, and he was able to return to his beloved football team. Victor was never the same after he recovered from the injury.

In 131 games, he only scored 18 goals for the club, thus they decided he was no longer needed and sold him to West Bromwich Albion.

Victor played 55 games and scored six goals for West Brom during his time at the club.

Once at Sunderland, he scored just three goals in 18 games before moving to Beijing Enterprise in China for the final leg of his career.

He was paid more each week in China than he had ever made in his whole career. This boosted his net worth significantly and put him among the richest footballers in Nigeria.

Next on the list of Nigeria’s wealthiest players is Yakubu Aiyebbeni.

When it comes to Yakubu, he’s known as “Yak” in Nigeria, and for all the wrong reasons.

In a key World Cup qualification match in 2010, his inexcusable error against South Korea was the reason for this.

It didn’t matter how bad his career got, he still made quite a bit of money.

He is also one of Nigeria’s most prolific goal scorers, having netted 21 times in 57 appearances for the national side over his career.

Despite being one of Nigeria’s highest-paid footballers, Yakubu Ayegbeni began his playing career at the grassroots level before moving to Europe to pursue a more lucrative career and financial rewards abroad.

Despite the fact that Ujah does not play for any of the top clubs in Europe, he has always made it a priority to put in sufficient effort for each of the teams that he has played for in order to maximize his earnings.

Anthony began his professional football career right here in Nigeria, where he grew up, and quickly rose through the ranks to become highly sought after by a number of clubs across Europe.

Ujah made up his mind in the end to sign a deal with Lillestrom lasting for four years. This transaction served as the cornerstone upon which Ujah constructed his whole wealth.

Ujah was vulnerable to a transfer to Mainz the following summer when he went on a scoring spree for the team that was rather impressive.

The string of disappointing performances that put Mainz in a fight against relegation at the end of the season compelled him to make the loan move to FC Koln.

After that, he went back to Mainz, played in Liaoning in China for a year, and then joined Union Berlin in the German Bundesliga the next season.

The majority of the contracts that he inked with these teams earned him enough money for him to deserve a spot on this list of the richest footballers in Nigeria. With his quick reflexes and agility in goal, Enyeama has been able to stop multiple shots. Although he was popular in Israel, his club career was less popular until he left Hapoel Tel Aviv and joined Lille in France.

When he was at Lille, he was the center of attention because he was replacing another well-known goalie. Lille’s record for most consecutive clean sheets was 11 games, set by him during his time there.

He also came within a single match of breaking the Ligue 1 clean sheet record for the season. Both the club and Vincent amicably terminated the deal, which primarily enhanced Vincent’s wealth and elevated him to the status of one of the richest footballers in Nigeria.

Enyeama who is also a native of Akwa Ibom State is one of the top 10 highest scoring goalkeepers in football history with 25 goals.

Final Words On the Richest Footballers In Nigeria

One of the things that make football such a popular sport is that anyone can join in. It doesn’t matter how much you earn, or even if you come from a wealthy family.

As long as you have talent and are good at the game, there’s a team out there that can use your services to win games and trophies.

The richest footballers in Nigeria can easily amass more wealth than most people. Are Footballers Rich? Yes, but how rich will depend largely on their success as a footballer and how well they manage their finances.

What did you think? Let’s have your comments in the box provided below.

sportinbits@gmail.comhttp://sportinbits.com
Get the latest Sports Updates (Soccer, NBA, NFL, Hockey, Racing, etc.) and Breaking News From the United States, United Kingdom, and all around the world.