So what did we learn from Week 1 of this NFL season?

For starters, it stays difficult for QBs to finish downfield passes while throwing off their back feet as unimpeded defenders attack inches from their rib cages. Doesn’t matter in case you’re Joe Flacco, Joe Namath or Mighty Joe Young, it’s not easily done.

And it’s not easily practiced. In spite of everything, it might be each inhumane and counterproductive to have your QBs rehearse being crushed.

Next, there’s Robert Saleh. The second-season Jets coach this week seemed frustrated Jets fans in PSL Stadium, Sunday, booed his team after they have been booing their feckless team for a lot of the last, oh, 50 seasons.

“Next, there’s Robert Saleh. The second-season Jets coach this week seemed frustrated Jets fans in PSL Stadium, Sunday, booed his team after they have been booing their feckless team for a lot of the last, oh, 50 seasons.”

Moreover, he placed the media, which to date has been gentle and even sympathetic toward him, on notice that he’ll exact a terrible vengeance. But what would Saleh have reported in regards to the Jets’ Week 1 home opener?

Moving on, TV’s NFL pregame shows proceed as pro-forma wastes of time, unless one enjoys overstuffed panel discussions of matters that likely won’t matter and compelled belly laughs that aren’t price a smile. 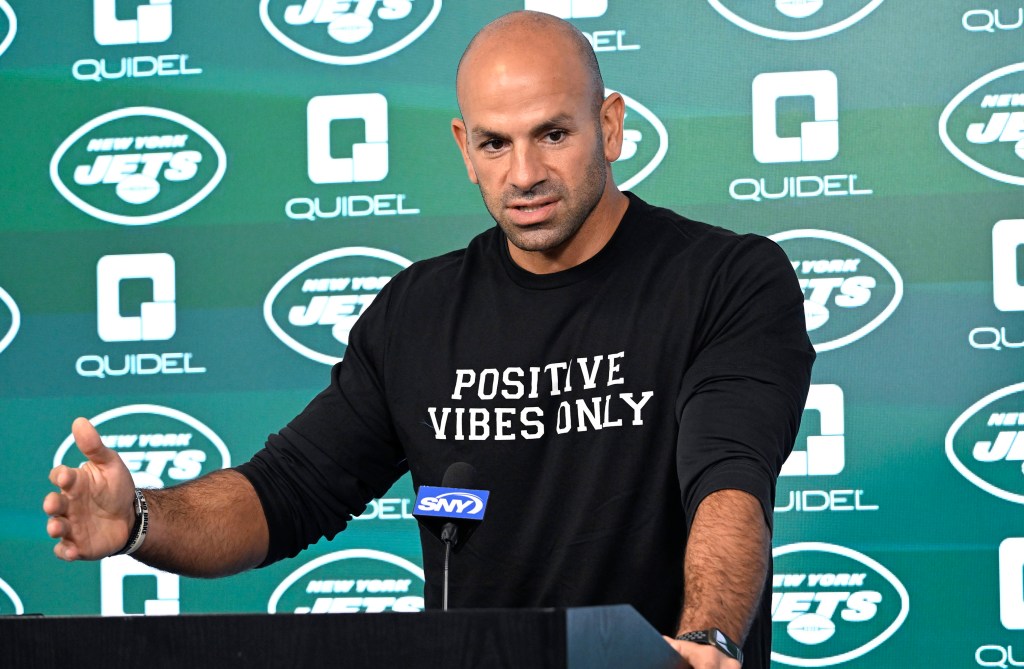 During Ravens-Jets, CBS sustained — as in 12 years — of providing its ritual mindless shots of mindless fans at Jets and Giants home games: beer in a single hand, pounding the field-side padding with the opposite.

This idiot-magnet shot only precedes big plays — third-and-goals, fourth-and-shorts — thus when it makes essentially the most sense to remain on the sector, TV bolts. It’s a thoughtless habit, like littering or inviting your sister-in-law for Thanksgiving.

As for ESPN’s Monday night Broncos-Raiders, lifelong pal Lloyd Stone asked, “Is there any option to watch this in black and white? Seattle’s garish green uniforms ought to be restricted to prisoners on trash patrol along the Jersey Turnpike.”

ESPN, as a matter of dim-witted habit, afflicted the telecast. Clearly, its first priority clearly was to point out Seattle coach Pete Carroll as often as possible. At one point in the primary half he appeared 4 times over 4 consecutive plays.

What wasn’t expected was that ESPN went light on show-and-speak shots of the “recent,” 20-years-on-Fox duo of Joe Buck and Troy Aikman, perhaps realizing we were acquainted with each. And each were downright palatable.

But when it most counted — the sport about to be decided, 20 seconds left and Denver with a fourth-and-5 from midfield — ESPN couldn’t simply allow Buck and Aikman to be heard discussing it; ESPN needed to cut to the booth so we could watch them discuss it.

And as we watched and heard them reasonably presume that rookie coach Nathaniel Hackett would go for a primary down behind “Last Minute” Russell Wilson, we missed each the sideline discussion — if there was any to see — then the surprising sight of Denver’s field goal team taking the sector, preface to a missed, game-ending 64-yarder.

Just before that Buck candidly admitted, “So we were on camera they usually switched within the huddle after they brought [kicker Brandon] McManus out.” But he and we couldn’t see what ESPN needlessly selected to cover.

So, Mr. Big Shot Lounge Chair TV Critic, you’re thinking that you could possibly do higher? Yes, yes, I do. Most everyone could!

Rutgers-Wagner mismatch a humiliation for each schools

Rutgers, Saturday, could have established a recent standard for winning ugly, a 66-7 stomping of NCAA second-division Wagner, a pay-to-slay number.

For openers, the afflicted-by-hysterics radio voice of RU football, Chris Carlin, incoherently screamed after every RU rating throughout the planned mismatch. He sounded as if RU was winning the national championship, an insult to listeners well aware that his was a bogus treatment of a predetermined massacre.

Next, the DoorDash Scarlet Ink Knights, after last 12 months running up a $73 million athletic department deficit to be shared by taxpayers and non-athlete students, paid Wagner about $500,000 to make the short trip from Staten Island to make this “game” occur.

RU, recently revealed to have spent $450,000 on DoorDash deliveries to football players through the pandemic, agreed to pay for transportation, food and 50 overnight hotel rooms for Wagner.

This “game” forced RU season subscribers to pay for tickets and parking even in the event that they selected to pass on such a “competition.” As for Wagner, it took the dough to have its student-athletes stomped. This game was a two-college disgrace that the NCAA and compliant media each allow and ignore.

However the humiliation served a purpose. It artificially allowed RU to crawl closer toward six-win bowl eligibility.

RU last season became “bowl eligible” despite a 5-7 season after Texas A&M pulled out of the TaxSlayer — satire-proof! — Gator Bowl against Wake Forest because of COVID. Desirous to be the substitute, RU lost 38-10, but coach Greg Schiano, already with a base salary of $4 million per plus tens of 1000’s in annual perks, earned a $75,000 bonus from RU for a bowl game invite.

Those that grab the massive money to affix the Saudi government-funded golf tour ought to be made to attend a Saudi government beheading of an accused political dissident or religious infidel.

Those that eagerly grab Nike dough, college coaches especially, ought to be made to work a full week in a Third World Nike factory.

And never that there’s anyone in LeBron James’ retinue to speak him off his self-assigned throne and Nike hypocrisies, but someone should at the very least try to inform him: the fair-minded not take him seriously.

James’ latest selectively blind, race-based messages, attacking the NBA for a mere one-year suspension (and $10 million advantageous!) as going soft on Suns’ owner Robert Sarver for using the identical language as does James’ N-wording, women-degrading rapper buddies, have turned him right into a Rev. Al Sharpton.

James’ one-way vision and lose-lose allegiance to double-standards — his silent indulgence of the continuing epidemic of dead-on-arrival black-on-black murder in our cities — has destroyed his credibility among the many logical.

Despite its outdoor set weekly surrounded, essentially by invite, by obligatorily rowdy and infrequently crude sign-brandishing, beer-for-breakfast students — security was increased after a full can was thrown at panelists — ESPN saw fit to rent ex-NFL punter Pat McAfee full-time for its “College GameDay” show.

Yep, he met all of the ESPN requirements!

Reader Len Geller on the complete frontal stats attack on the nice senses during Yanks and Mets telecasts: “In my last email I used vowels 34.7% of the time. That’s up from 31.4% in my previous email. In August I used to be right down to 29.8 % vowel usage. In July, I used to be at 32.2%.