RUTH SUNDERLAND: Andrew Bailey under pressure at Bank of England 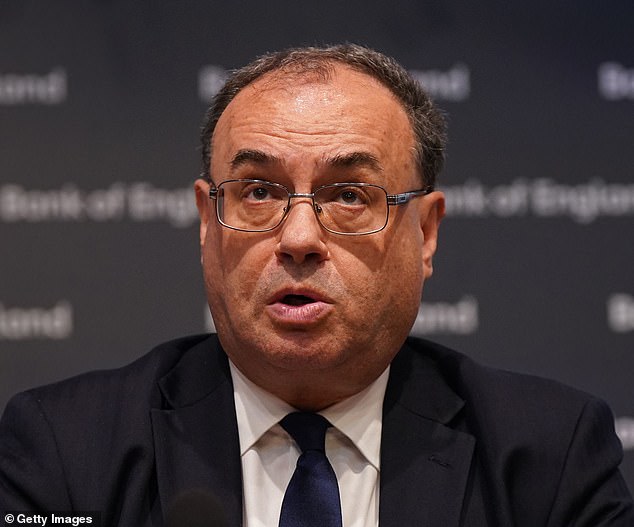 RUTH SUNDERLAND: Andrew Bailey could also be ensconced at Bank of England until 2028 and to his detractors, that can look like a really very long time

Andrew Bailey, the beleaguered Governor of the Bank of England, is in for one more bruising week. Inflation and employment figures will proceed to color a troubling picture of rising prices and labour shortages.

His defenders point to similar economic woes in other developed countries, where central bankers have been even slower to act.

But Bailey, together with his lurches from insouciance to alarmism, has pinned a bullseye to his own back. A lot so, that Liz Truss is talking about reviewing the Bank of England’s mandate if, as looks increasingly likely, she grasps the keys to No10.

Within the firing line: Andrew Bailey, together with his lurches from insouciance to alarmism, has pinned a bullseye to his own back

Bailey has indicated he’s open to the thought of a review of the mandate, which for the reason that Nineties has been to deliver low inflation. After many years of doing just that, the Bank’s recent performance has been dismal.

Truss may have a look at changing the inflation goal, or incorporating other measures, perhaps linked to nominal GDP or employment.

One positive step can be more external members of the Monetary Policy Committee that sets rates of interest to scale back the chance of groupthink.

The Bank has been independent since 1997, but this has recently come under query. Central bank independence is a wonderful principle. It prevents cynical politicians from manipulating rates of interest to suit their very own electoral purposes, on the expense of the general public.

But its success is very depending on the standard of the governor. If there’s a duffer in Threadneedle Street, the country has a serious problem, not least since it is so hard to do away with her or him. Truss may have a look at the governor’s term of office and the circumstances under which she or he will be removed.

Outright demands for Bailey’s head are on the fringes: Unseating the central bank governor in a democratic, developed country is just not to be evenly contemplated.

If Bailey were to be removed on the behest of politicians – a few of whom probably couldn’t name the members of the Monetary Policy Committee, let alone run monetary policy – it could create alarm on markets. It could also make it hard to recruit a world-class substitute.

An issue with the regime is that governors are installed for terms of eight years.

During that point, they don’t need renewed approval from the Government. In other words, it is vitally hard to defenestrate them.

The Court of the Bank and the Chancellor can in theory remove a governor, if she or he has gone AWOL for months, goes bankrupt or is unfit to operate, due to, say, habitual drunkenness.

The thought is to forestall exile from Threadneedle Street just because the Government doesn’t like what a central banker is saying or doing. The eight-year term was introduced a decade ago. The thought is that it’s enough time for a governor to make sound independent decisions, but not a lot that she or he lingers past their sell-by date.

But eight years of virtually impregnable power is for much longer than most prime ministers or chief executives could hope to enjoy – or perhaps endure.

The very fact there isn’t any formal mechanism to oust a governor before the top of their term doesn’t mean it absolutely can’t be done.

Pressure will be applied behind the scenes, and ‘resignations’ will be engineered.

Equally, though, a hard-headed governor could dig in his or her heels and take the view they’ll outlast their political tormentors, who remain on the mercy of voters.

Bailey, who is just two years in, has said he intends to serve his term, which he sees as a part of the material of Bank independence.

He could be ensconced on the Old Lady until 2028 and to his detractors, that can look like a really very long time.