RUTH SUNDERLAND: Boards should learn to like the AGM 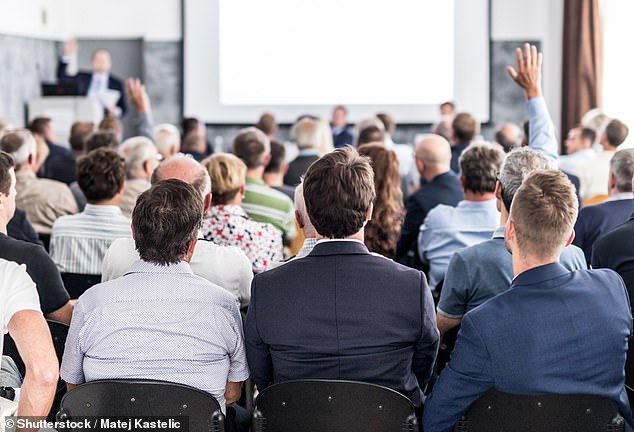 RUTH SUNDERLAND: Boards should learn to like the AGM, there’s more to them than placards and curly-crusted sandwiches – they’re a lynchpin of shareholder democracy

The AGM is back with a vengeance. In the course of the pandemic, most annual general meetings were held digitally, little doubt to the key delight of many a boss.

A lot easier to regulate the proceedings at a virtual gathering than having to deal in person with shareholders and their awkward questions.

Even pre-Covid, some corporations seemed reluctant to come across an actual, live investor.

Placed on the spot: The beauty of AGMs is that any investor – or member, within the case of a mutual – has an equal right to be heard

Gambling giant Entain liked to carry its meeting in Gibraltar, making it far less accessible for small UK shareholders; a disgraceful stance for a FTSE 100 company.

The AGM is a singular fixture in the company calendar and the present season has been filled with fireworks.

Results announcements are frequently dry affairs. However the annual meeting is commonly a mixture of student demo and village fete. Woke young protesters mingle with elderly private shareholders and all can have their say.

At Barclays, activists barracked the chairman, and a few glued their derrieres to the seats to make it harder to throw them out. There have been pay rows at Ocado and GSK and drama at Just Eat, which announced the resignation of its chairman and a probe into an executive just before the meeting began.

Big shareholders try to have interaction with boards behind the scenes, so it’s quite rare for a big institutional investor to talk out.

When it does occur – as in 2018 when the then head of stewardship at Aberdeen Standard addressed the hall on the Persimmon meeting over former boss Jeff Fairburn’s bloated pay – it might probably have a potent effect. The beauty of AGMs is that any investor – or member, within the case of a mutual – has an equal right to be heard.

Strange savers equivalent to John Higgins, a long-term member of mutual insurer LV, can mount a challenge against the board.

Mr Higgins has already garnered huge backing ahead of LV’s meeting this 12 months for a vote of no confidence within the chief executive for his chaotic try and flog the insurer to non-public equity.

There’s, after all, no excuse for violent or rude behaviour by shareholders.

Protest at an investor meeting is, nevertheless, normally an indication of an organization that has did not listen. Confronting directors on the AGM is the theatre of last resort.

It will pay boards to listen higher. Investors – who look ahead of their assessment of risks to the world economy – often front-run concerns which have yet to permeate through to wider consciousness.

Protests about pollution, climate change and, going back, apartheid, at the moment are a part of the mainstream, but had an early airing in boycotts and motion to influence corporates. Many US firms see the positive power of AGMs to construct their brand, and use the meetings as spectacular marketing events.

Probably the most memorable I attended was for Starbucks in Seattle in 2016. Shareholders were treated to a rock concert – Alicia Keys gave a performance – and a political rally, with founder Howard Schultz inveighing against Trump-ist politics.

There isn’t any British reminiscent of Warren Buffett’s Berkshire Hathaway AGM in Nebraska – a weekend festival for investors, like Glastonbury with spreadsheets.

Here, boards appear to view AGMs as, at best, a little bit of a nuisance, where even when there are not any protests, they need to make small talk with pensioners over the buffet. In truth, AGMs are a chance for boards to realize useful insights. At M&S, the meetings are famous for small investors supplying critiques of the underwear and fashion.

Boards should learn to like the AGM. There’s more to them than placards and curly-crusted sandwiches. They’re a linchpin of shareholder democracy.