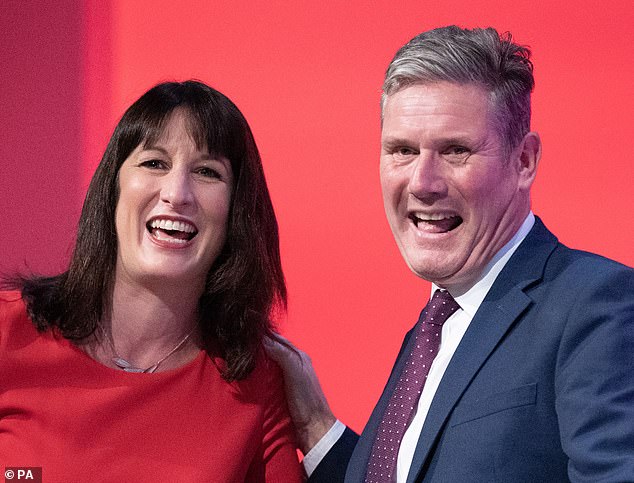 Recent Labour – remember them? – had their ‘prawn cocktail offensive’ when Gordon Brown and his acolytes successfully seduced the City ahead of the landslide 1997 victory.

As Shadow Chancellor Rachel Reeves looks ahead to 2023, her thoughts shall be turning along similar lines. She and her boss, Sir Keir Starmer, have been sidling as much as business leaders. Reeves was spotted hobnobbing on the distinctly un-socialist Chelsea Flower Show, a magnet for corporate grandees. We will expect these efforts to accentuate this yr.

Perceptions among the many electorate of the 2 major parties and their competence to run the economy have modified since Boris Johnson won the 2019 election when Jeremy Corbyn and his hard-Left sidekick John McDonnell were rejected by voters.

Blissful days: Shadow Chancellor Rachel Reeves and her boss Sir Keir Starmer have been sidling as much as business leaders

Starmer is parading about, declaring himself to be proudly pro-business. The party just before Christmas hosted a shindig for CEOs in Canary Wharf, sponsored by no less an agent of international capitalism than the banking giant HSBC.

The event was a sell-out, with a waiting list. Guests and keynote speakers included top tier figures similar to Tesco’s John Allan and Aviva’s Amanda Blanc.

This could give the Tories pause for thought. Business people closest to the party – the donors – are inclined to come from a narrow sub-set of the industrial world – self-made entrepreneurs, hedge fund managers or financiers who don’t answer to a board or shareholders. Leaders of huge listed corporates often remain party-neutral in public for fear of offending.

The cosying as much as Labour is a mix of pragmatism and frustration with the Tories over strikes, the Liz Truss debacle and lingering resentment over Brexit.

Leaving the EU, plus the Truss interlude – when the UK was given a ‘moron premium’ to cover the risks of political stupidity – has, they imagine, deterred overseas investors.

There’s an undercurrent amongst business leaders of feeling ignored and slighted by the Conservatives. It barely matters whether any of that is correct or fair. Perceptions have taken root within the absence of a powerful counter-narrative.

Hunt is working on plans to turbo-charge growth ahead of the Budget, as we explain below, but he’ll face intense scepticism.

We’re told, as if it were fact, that Britain is a basket case, that we’re performing far worse than comparable economies, and that our situation is uniquely awful. It’s nonsense. The UK continues to be the sixth largest economy, our financial sector stays world-beating, we’ve got the large advantage of the English language, robust property rights and the rule of law.

The Truss/Kwarteng mini-Budget must be put in perspective. There have been no military coups, no riots and the boring blokes in suits were soon back in charge.

Rishi Sunak and Jeremy Hunt have steadied nerves on markets but they should do more. The pair looked impotent within the face of the wave of strikes over Christmas.

They’ve slapped tens of millions with higher taxes and did not articulate a convincing vision of how they’ll reboot the economy.

This has left a void for Labour. Reeves says she’s going to make the UK the start-up capital of the world, scrap business rates and draw up a recent industrial strategy.

From a celebration that was so recently within the grip of Corbynites (who haven’t gone away) and which stays in hock to the unions, this will likely be implausible stuff. Even so, this narrative will gain a stronger hold in 2023 if the Tories fail to nip it within the bud.