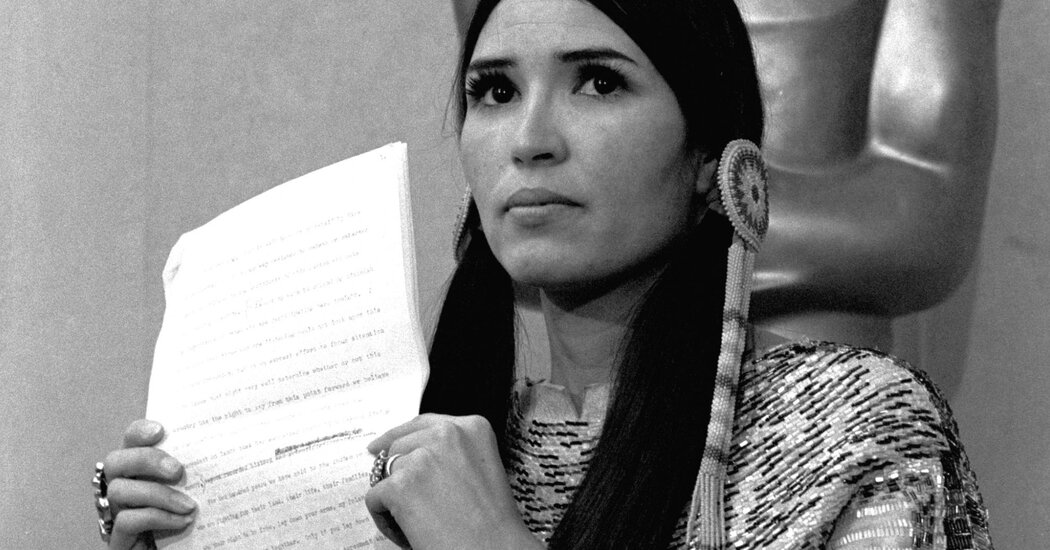 Sacheen Littlefeather, the Apache activist and actress who refused to just accept the very best actor award on behalf of Marlon Brando on the 1973 Oscars, drawing jeers onstage in an act that underscored her criticism of Hollywood’s depictions of Native Americans, died on Sunday at her home in Marin County, Calif. She was 75.

Her death was announced in an announcement by her family and by the Academy of Motion Picture Arts and Sciences. Last 12 months, Ms. Littlefeather confirmed on Facebook that she had breast cancer — “stage 4, terminal” — that had spread to a lung.

Her death got here just weeks after the Academy apologized to Ms. Littlefeather for her treatment through the Oscars. In an interview with The Hollywood Reporter in August, she said she was “stunned” by the apology.

“I never thought I’d live to see the day I could be hearing this, experiencing this,” she said.

When Ms. Littlefeather, then 26, held up her right hand that night contained in the Dorothy Chandler Pavilion in Los Angeles — signaling to the award presenters, the audience and the tens of millions watching on TV that she, acting on Mr. Brando’s request, had no desire to ceremoniously accept the shiny golden statue — it marked one in every of the best-known disruptive moments within the history of the Oscars.

“I urge presently that I actually have not intruded upon this evening, and that we’ll, in the long run, our hearts and our understandings, will meet with love and generosity,” Ms. Littlefeather said at the rostrum, having endured a chorus of boos and a few cheers from the gang.

Her appearance on the forty fifth Academy Awards was the primary time a Native American woman had stood onstage on the ceremony, she in a glimmering buckskin dress, moccasins and hair ties. However the backlash and criticism was immediate. The actor John Wayne was so unsettled that a show producer, Marty Pasetta, said security guards needed to restrain him in order that he wouldn’t storm the stage.

Ms. Littlefeather told The Hollywood Reporter in August, “After I was at the rostrum in 1973, I stood there alone.”

She was born Marie Cruz on Nov. 14, 1946, in Salinas, Calif. Her father was from the White Mountain Apache and Yaqui tribes in Arizona; her mother was of French, German and Dutch lineage, in response to Ms. Littlefeather’s website. After highschool she took the name Sacheen Littlefeather to “reflect her natural heritage,” the location states.

Information on her survivors was not immediately available.

Ms. Littlefeather’s website said she had participated within the Native American occupation of Alcatraz Island, which began in 1969 in an act of defiance against a government that the protesters said had long trampled on Native American rights.

Her acting profession began within the early Seventies on the American Conservatory Theater in San Francisco. She would go on to play roles in movies like “The Trial of Billy Jack” (1974) and “Winterhawk” (1975).

Ms. Littlefeather said in an interview with the Academy that she had been planning to look at the awards on television when, the night before the ceremony, she received a call from Mr. Brando, who had been nominated for his performance as Vito Corleone in “The Godfather.”

The 2 had turn out to be friends through her neighbor Francis Ford Coppola, who had directed the film. Mr. Brando asked her to refuse the award on his behalf if he won and gave her a speech to read just in case.

With only about quarter-hour left in this system, Ms. Littlefeather arrived on the ceremony with little details about how the night would work, she said.

A producer for the Oscars noticed the pages in Ms. Littlefeather’s hand and told her that she could be arrested if her comments lasted greater than 60 seconds.

Within the speech, Ms. Littlefeather brought attention to the federal government’s standoff with protesting Native Americans then happening at Wounded Knee, S.D., the location of a massacre by U.S. troops a century earlier.

She later recalled that while she was giving the speech — she never finished it — she had “focused in on the mouths and the jaws that were dropping open within the audience, and there have been quite just a few.”

The audience, holding “only a few people of color,” she recalled, looked like a “sea of Clorox.”

She said that some audience members did the so-called “tomahawk chop” at her and that when she went to Mr. Brando’s house later, people shot on the doorway where she was standing.

Last month, Ms. Littlefeather spoke at a program hosted by the Academy called “An Evening With Sacheen Littlefeather,” by which she recalled the Oscars ceremony and asserted that she had stood up for justice in all the humanities.

“I didn’t represent myself,” she said. “I used to be representing all Indigenous voices on the market, all Indigenous people, because we had never been heard in that way before.”

The audience erupted in applause.

“I needed to pay the worth of admission, and that was OK,” she continued. “Because those doors needed to be open.”

After learning that the Academy would formally apologize to her, Ms. Littlefeather said it felt “like a giant cleanse.”

“It seems like the sacred circle is completing itself,” she said, “before I am going on this life.”