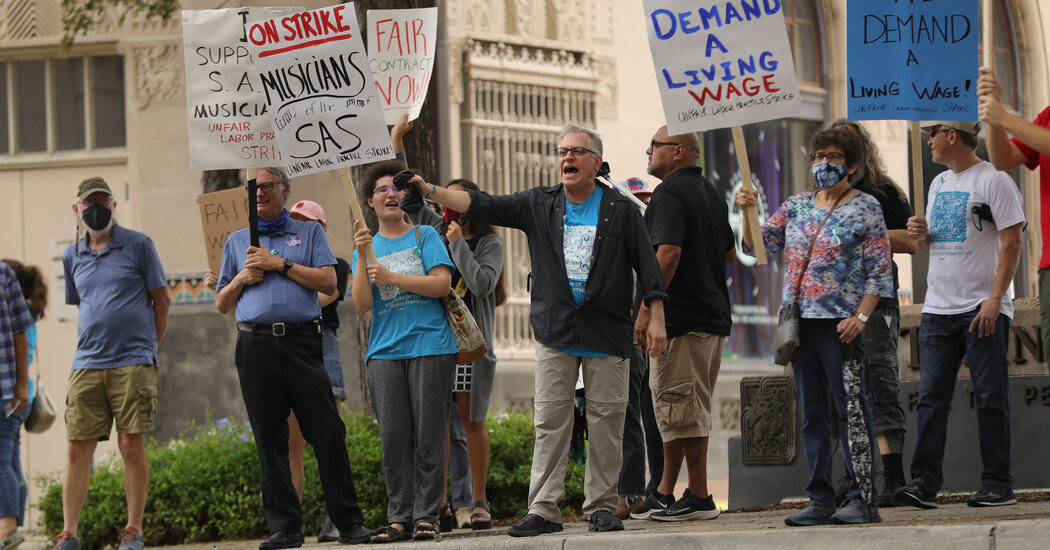 For nearly nine months, the musicians of the San Antonio Symphony were on strike, resisting steep cuts proposed by management that they said would destroy the ensemble. Because the dispute dragged on, much of the 2021-22 season was canceled, the players found part-time jobs and mediators tried to barter a compromise to save lots of the 83-year-old orchestra.

The impasse got here to an end on Thursday with the announcement that the symphony had decided to file for bankruptcy and dissolve. The symphony’s board, which had argued that maintaining a big orchestra had grown too costly, especially throughout the coronavirus pandemic, said it didn’t see a path forward.

“With deep regret,” the board said in a statement, “the board of directors of the Symphony Society of San Antonio publicizes the dissolution of the San Antonio Symphony.”

The board said the musicians’ demands to preserve jobs and pay would require “agreeing to a budget that’s thousands and thousands of dollars in excess of what the symphony can afford.”

The choice will make San Antonio, with a population of 1.5 million, the biggest American city with out a major orchestra.

“When you might have a significant American city which isn’t in a position to support an orchestra, it loses history and tremendous inspiration which has been dropped at the community,” said Simon Woods, president and chief executive of the League of American Orchestras. “It’s just incredibly sad.”

Lots of the orchestra’s players were caught off guard by the announcement and said they were disheartened that a compromise couldn’t be reached. For the reason that strike began in late September, some have been working as substitutes in other orchestras, including in Boston, Latest York, Dallas and Nashville.

“It is gloomy and it is totally unnecessary,” said Mary Ellen Goree, the previous principal second violin of the orchestra, who was involved in negotiations. “I very much wish that our leadership had removed themselves without burning down the organization.”

The pandemic, which forced many orchestras to cancel concert events for a season or longer, has exacerbated those problems. The vast majority of orchestras were in a position to return to concert halls this past season, counting on government grants and an uptick in donations, but others struggled to reopen.

In San Antonio, the orchestra’s administrators cited the pandemic in justifying the necessity for steep cuts, including slashing the scale of the full-time ensemble by greater than 40 percent, to 42 positions from 72, shortening the season and reducing pay by almost a 3rd.

The musicians resisted those moves, accusing administrators of mismanagement and greed. The dispute grew unusually bitter, with the orchestra cutting off medical health insurance for the striking players.

The board continued to defend the cuts, saying they were mandatory to avoid a financial crisis. The musicians, in turn, accused managers of exploiting the pandemic to push through reductions in pay and advantages.

Goree, who joined the orchestra in 1988, said its musicians would proceed to look for methods to play locally under a recent name. Over the past several months they’ve held concert events independent of the symphony at a neighborhood church, raising money on their very own. They hope to soon announce a fall season.