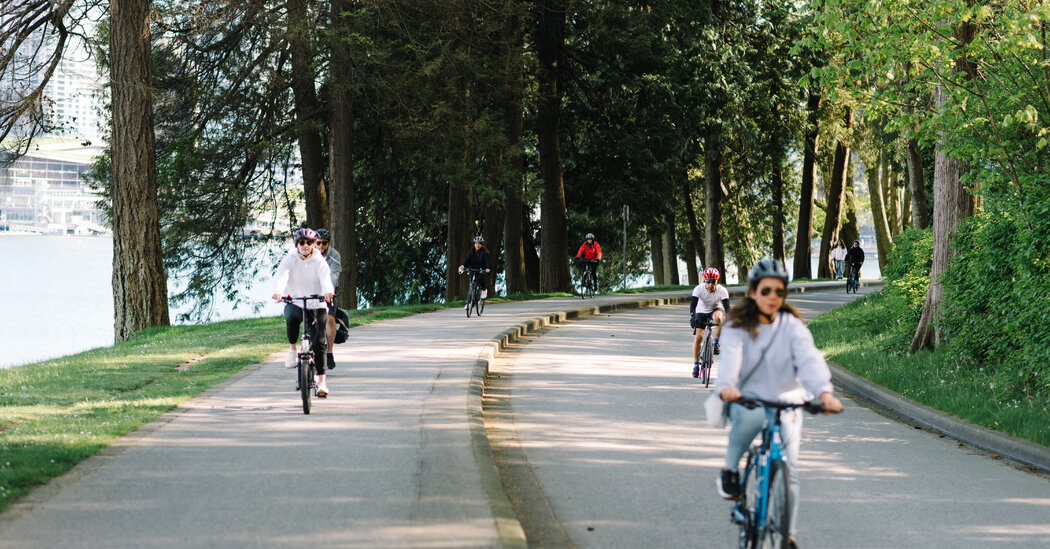 Once I returned to Vancouver within the late Eighties, biking in town was different than it’s today. In my memory, the one people brave enough to ride downtown were bike couriers. On sunny afternoons there could be a dozen of them lounging and smoking outside the HSBC bank constructing on West Georgia Street, waiting for his or her next sortie, looking bored and skeptical, outlaws each one.

Mere civilians, like me, were discovering mountain bikes around this time because you could possibly ride them on trails, which is to say, safely distant from the at-times murderous urban traffic.

All that has modified. Bike couriers fell to technology. Vancouver got down to grow to be a “green city,” and we now have a network of protected bike lanes throughout the downtown core consequently. Commuting to work, and even just casually biking about, is now not a life-and-limb undertaking.

Meanwhile, back in 2015, town also accomplished the last extension of the ocean wall with separated bike and pedestrian lanes. You may now travel its length, with little elevation change, from the Vancouver Convention Center on the north side of downtown, around Stanley Park, along the north and south banks of False Creek, and eventually, all the way in which west to the vast sandy beaches at Spanish Banks. There, in late spring and early summer — particularly on crowd-free weekdays — bald eagles might be seen wheeling in pairs within the updrafts over the anchored freighters.

I like the ocean wall. But then, quite a lot of us do here. We stroll it. We bike it. We crowd the community squares along its length in any remotely nice weather. Asked how a visitor can really see this place on a brief visit, that’s what I’d say: Rent some wheels and hit the ocean wall. There’s no higher option to absorb Vancouver from so many angles while accessing a variety of local tastes and experiences as you go. And with bike and e-bike rental shops throughout the downtown core, it couldn’t be easier.

From Canada Place, the cruise-ship port in downtown Vancouver, probably the most compact version of the ocean wall ride could be to ride all of it the way in which around Stanley Park, the 1,000-acre, densely forested public park that extends westward from downtown and is arguably the crown jewel of town. Weave your way through the buskers and conventioneers near Canada Place and pick up the bike path on the southwest corner of the Vancouver Convention Center. From the north side of the constructing you’ll get a terrific view of the working harbor: orange cranes towering over their quilt-work stacks of containers; ferries crossing the inlet to North Vancouver; the low roar of floatplanes taking off and heading west through the uprights of the Lions Gate Bridge.

It’s only a couple of minutes ride from here to the park, winding across the Coal Harbour Marina with its enormous yachts, then the Westin Bayshore. Expect foot and bike traffic. But past the red-and-white lighthouse at Brockton Point the traffic thins out. I find it serene gliding along this stretch, Stanley Park’s forest rising high on one side and people towering mountains right there across the inlet.

Once across the corner under the Lions Gate, automotive traffic booming high overhead, stop to absorb the seabirds, fishermen throwing lines off the rocks, sailboats tacking and reaching their way among the many anchored freighters.

At a leisurely pace, which I encourage, it takes about 40 minutes to succeed in English Bay from where you began at Canada Place. I at all times hop off the ocean wall here to dive into the dense vibrancy of Vancouver’s West End. Like many others, I used to rent down here. And should you stop for a drink on the Sylvia Hotel bar, or head up Denman Street for coffee at Delany’s, or for five pork dumplings in beef broth at Legendary Noodle, you may just consider yourself as an honorary West Ender as well.

To finish this short ride, leave the ocean wall now and proceed north on Denman Street. You would walk your bike for this stretch as the road life is its own entertainment. If you reach the water on the north end of Denman you’ll rejoin the ocean wall and may then follow it back to Canada Place.

For an extended ride, about 90 minutes round trip, remain on the ocean wall and carry on past English Bay, under the Art Deco-style Burrard Street Bridge, and into False Creek. Here you will see a really different set of Vancouver scenes and moments.

Home to sawmills and lumber yards as recently as my very own childhood, False Creek is now a residential zone with waterside condos, shops, restaurants, parks and more big yachts within the marinas along the north side of the creek. I at all times stop to take a look at the smaller boats anchored totally free: liveaboards, which, combined with those bathtub ferries taking people backwards and forwards for shopping on Granville Island, give False Creek a pleasingly lived-in feel.

I turn this right into a picnic once I’m down here with family and friends. There are excellent restaurants blocks off the water within the chic converted warehouse district of Yaletown. But quarter-hour past English Bay so far as the foot of Davie Street, you possibly can pick up a more casual lunch of pancetta and onion pizza on the Sciué Italian Bakery or a bento box from the upscale grocer Urban Fare. Eat on the benches that line the water or in David Lam Park, where you possibly can hearken to kids within the playgrounds, and watch the bridal parties taking photographs under the cherry blossoms.

Only 10 minutes farther on the ocean wall, around the tip of False Creek, past the geodesic dome of Science World, you’ll find the general public square in Olympic Village. You’ll know you’re there once you see “The Birds” sculpture: two house sparrows slightly below 20 feet tall. In the event you’ve waited for lunch, that is prime food truck territory, but a peach and rosemary tart and a coffee from Terra Breads cafe has never didn’t hit the mark either. After lunch, wander right down to the water, lean on the railing and watch the dragon boats, 20 paddlers each, churning the water to a white wake.

Following the signs for the ocean wall bike route, you’ll soon roll into Granville Island. It’s a giant attraction, so expect crowds. But it surely’s a neighborhood place, too. Once I lived closer, I shopped at the general public market here almost every single day. Even now I’ll stop to say hello to the parents at Tenderland Meats, or watch the fishmongers breaking down salmon. It’s also possible to wander down the island’s lanes to see glassblowers at work. Popina on the tip of the pier is your spot for all the things from falafels to Nashville hot chicken, lobster rolls to crispy cod sandwiches. To finish this 90-minute ride, take the bike-friendly Aquabus on the far side of the market and it can be under quarter-hour back to Canada Place via protected bike routes.

You’ll have seen quite a lot of town by now. But as a neighborhood, I’d consider one stop still outstanding. That is the longest version of the ocean wall ride and would take a bit over two hours in total from Canada Place to Spanish Banks and back. Proceed west from Granville Island, around Vanier Park, past the Vancouver Maritime Museum. Pause to take a look at the heritage boats moored at Elsje Point. I just like the red-sailed Anja particularly, a Bristol Bay Cutter, the ancestor design of contemporary racing yachts. Proceed past Kitsilano Beach park, down West Point Grey Road, and across the corner on the Jericho Sailing Center, where kids learn the ropes on their 420s and Lasers. Here Spanish Banks opens up ahead: a large stripe of grassy shore and sandy beach that scallops its way westward.

On summer weekends the realm buzzes with family barbecues, volleyball games on the sand. But for me, the day of the week matters much lower than the tides. I time my visit to Spanish Banks for the bottom low, when the ocean pulls back dramatically, exposing a whole bunch of meters of sand along a two-kilometer stretch of beach.

You’ll want beach shoes. There are tidal pools. Together with your bike locked up, head out onto the sand flats. The dogs will chase Frisbees up and down. The gulls will scream and dive. The eagles will circle and soar. And should you walk out near the lip of the sands, the freighters will seem almost close enough to the touch.

I’ll invariably turn and face town at this point. I’ll note the dense green shoulder of Stanley Park, the West End towers rising and bristling, the crystal glass constellation of downtown and False Creek towers, all seemingly silent and still from this distance, a seam of life pinned in place between the dome of eggshell sky above, the steel blue ocean below.

Here is town’s best angle, I submit. Vancouver in a single macro-glimpse. Well definitely worth the journey for a newcomer. Even for this lifer, an eye-opener each time.

Timothy Taylor is a novelist and journalist. His latest work is a novel in regards to the rise and fall of a celeb chef. Mr. Taylor lives and eats in Vancouver.