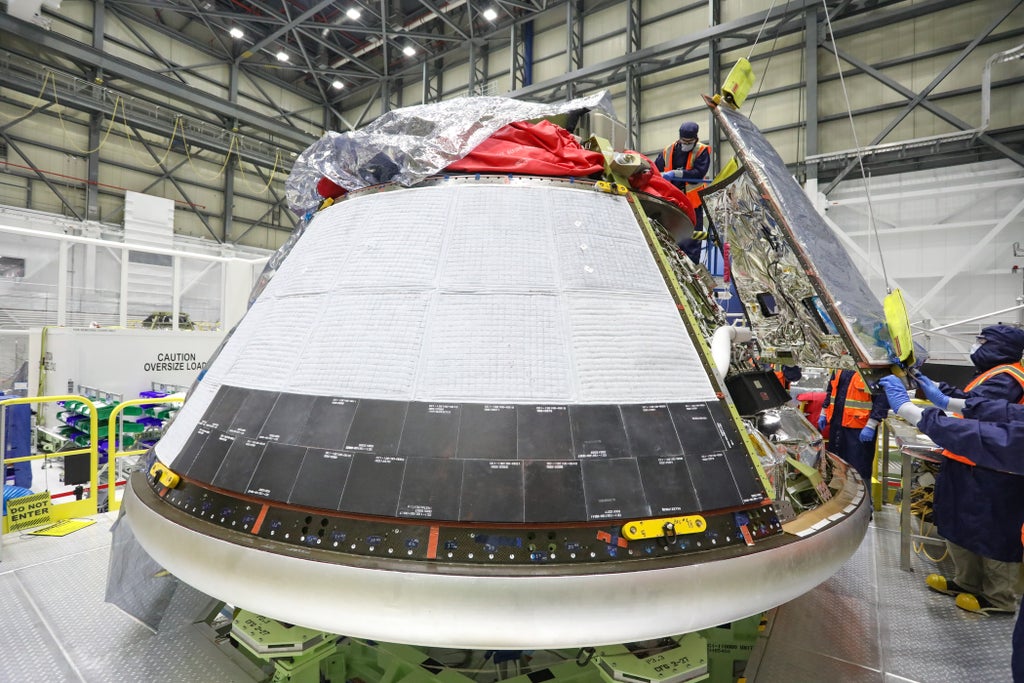 Boeing and Nasa are able to mate Boeing’s Starliner spacecraft to a rocket for a vital test flight scheduled for later this month.

Nasa’s Psyche spacecraft recently arrived at Kennedy Space Center in Florida for a final wave of testing before blasting off to a distant asteroid of the identical name later this summer.

Read below for more on what’s next in space in the approaching weeks.

Nasa’s Crew 3 astronauts undocked from the ISS at 1.20am EDT Thursday, and are expected to splashdown within the waters off the Florida coast around 12.3am EDT Friday morning.

The Crew-3 astronauts — Raja Chari, Tom Marshburn, and Kayla Barron of Nasa, and Matthias Maurer of the European Space Agency — have lived on the ISS since November.

Their replacements, Crew-4, arrived on the ISS on 28 April, and can likewise spend roughly six months on the ISS, returning to Earth in the autumn.

Crew-3 and Crew-4 flew to the ISS aboard SpaceX Crew Dragon spacecraft and atop SpaceX Falcon 9 rockets. That’s because since 2020, SpaceX has been the one business operating approved to fly astronauts as a part of Nasa’s Industrial Crew program.

Nasa originally awarded two firms contracts for its business crew program, SpaceX, and Boeing. But while SpaceX began regular service with Crew Dragon in 2020, Boeing’s Strainer spacecraft bumped into a pc glitch during its 2019 orbital test flight that prevented the uncrewed spacecraft from docking with the space station.

A second shot at that test flight, a mission enumerated as OFT-2, was further delayed in August, but is now scheduled for no sooner than Thursday 19 May.

The Starliner will launch from launch complex 41 at Kennedy Space Center, in Florida, atop a United Launch Alliance Atlas V rocket. Nasa officials, including administrator Bill Nelson, have repeatedly said that hardware redundancy, a second ride to the ISS using different technology than SpaceX has up to now, is vital to the space agency.

As recently as early April, Nasa officials were still discussing launch windows in May, June and July for the primary test flight of its Space Launch System (SLS) Moon rocket and Orion spacecraft.

But after three aborted attempts to finish an important launchpad fueling test referred to as a wet dress rehearsal since 17 March, Nasa rolled the rolled the 322-foot-tall rocket back into Vehicle Assembly Constructing on Tuesday 26 April and readjusted expectations. During a media call Tuesday morning, Nasa assistant administrator Bob Cabana suggested making a SLS test flight by sometime August could be a schedule the space agency would must work hard for at this point.

SLS and Orion together form the core of Nasa’s Artemis Moon program. Artemis I, an uncrewed test flight of each vehicles, must happen before Artemis II, a crewed lunar flyby scheduled for May 2024, and Artemis III, a mission to return humans to the lunar surface scheduled for 2025.

On 2 May, Nasa’s Psyche spacecraft was flown from the space agency’s Jet Propulsion Laboratory facility in California to Kennedy Space Center in Florida, where the craft will undergo testing in preparation for a 1 August launch.

Psyche will likely be the primary spacecraft to make use of solar-electric propulsion to travel beyond the Moon, using 800s square feet of solar panels to power its Hall effect thrusters for the 1.5 billion mile journey to the asteroid Psyche within the fundamental asteroid belt. Thrusters use electric fields to push propellant and generate thrust, and are very efficient, but take an extended time to accumulate speed — Psyche the spacecraft won’t reach Psyche the asteroid until 2026.