Spain vs. Germany: Heavyweight Thriller Ends in a Tie 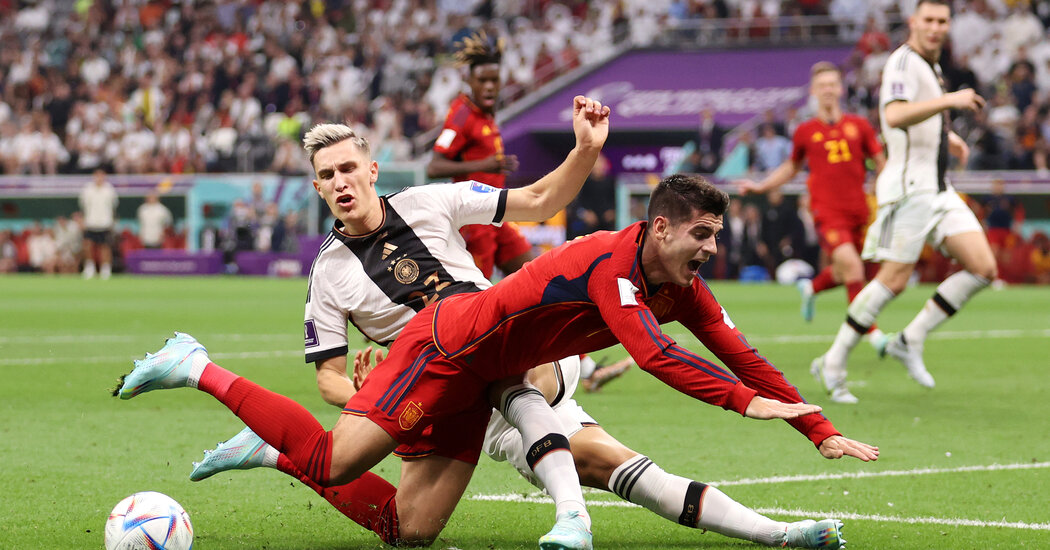 AL KHOR, Qatar — That is how high-quality the margins could be: As the primary bout between heavyweights of this World Cup ticked into injury time on Sunday, Álvaro Morata of Spain found himself cantering into the penalty area, the ball at his feet, goalkeeper Manuel Neuer’s net looming ever larger in his vision. Behind him, Nico Schlotterbeck of Germany was straining to shut ground.

There have been, at that time, two possible outcomes for Germany. They were separated within the moment only by a heartbeat, a blink of an eye fixed, a blade of grass. But they carried with them two destinies that were not only distinct, but worlds apart. It was not only Germany’s hope of reaching the knockout rounds that hung within the balance, but estimations of its soccer culture, the international careers of its players and possibly the continuing employment of its manager.

In a single consequence, Schlotterbeck wouldn’t make it back. Having already scored for Spain, Morata would take a touch to set himself, then send one other shot careening past Neuer. Germany would lose its first two games at this tournament. The grumbling since Germany’s 2-1 loss to Japan on Wednesday would resume.

Germany Coach Hansi Flick’s team would head into its final match on Thursday, against Costa Rica, knowing its fate was not in its own hands, aware that it was flirting with the humiliation of being eliminated from the World Cup at the primary hurdle for a second consecutive tournament. The players involved would carry the stigma with them for a while. Several international careers would end in ignominy. Flick could lose his job.

In the opposite consequence, Schlotterbeck would get there, hooking his foot across the ball and stealing it from Morata’s grasp. Germany would retain the purpose it had earned through a thunderous equalizer within the 83rd minute from Niclas Füllkrug, who was making just his third appearance for his country, at age 29, and with that time some measure of control over its fate.

Now, a mere victory against Costa Rica on Thursday would, in all likelihood, mean secure passage through not simply to the last 16 from a clumsy group draw, but to what must feel like an overdue stroke of excellent fortune: a tie not against one other powerhouse but a relative outsider, Morocco or an aging Croatia, and an affordable shot at a spot within the quarterfinals.

The absurdity of such starkly opposing consequences is obvious. Germany’s performance would have been almost the exact same whether Schlotterbeck made that tackle or not; it was, in any case, only one incident amongst many lots of over the course of some 100 minutes, one decision amongst hundreds.

Had he did not get there, it might not have been due to some fatal flaw in how Germany develops talent. It will not even, really, have been proof of a grand tactical failing on Flick’s part, or evidence that the atmosphere among the many players had grown irretrievably toxic, or a rational basis on which to terminate someone’s employment.

It will not have rendered every part Germany had done over the last few hours irrelevant: enduring Spain’s slick, irresistible start, when Dani Olmo cracked a shot off the crossbar and Pedri and Gavi, Barcelona’s seraphic midfielders, clipped the ball around as if it was their personal possession; slowly establishing a foothold in the sport; finding ways to menace a Spanish team that had looked powerful just just a few days before.

The previous couple of days have been difficult for Germany. There have been, as Kai Havertz said before the sport, greater than a handful of frank exchanges of views among the many players and the coaching staff. Midfielder Ilkay Gundogan, a contemplative, even-keel form of an individual, admitted afterward that it had taken him somewhat while to process defeat against Japan within the opening game. “The day after, even the day after that, was still difficult,” he said.

And yet even when Morata’s inventive finish gave Spain the lead within the 62nd minute, sucking the air from Germany’s fans, bringing a reprise of the nightmare of 2018 inside view, Gundogan and his teammates retained their cool. They didn’t seem haunted, panicked or desperate. They didn’t seem like a team within the grip of an identity crisis.

As an alternative, they played with a maturity that provides considerable hope. Jamal Musiala, the brightest of their young generation, may need scored; Füllkrug, regarded almost as an accidental international, an indication of the shortcomings within the German system, was fairly less forgiving.

That will not be to say it was spectacular — removed from it — but it surely was stuffed with all of those other traits which might be considered quite useful in these circumstances, grit and fight and industry and customary sense, all of the ingredients teams needn’t simply to recuperate from setbacks but to go on to greater things.

After which got here that moment, when Schlotterbeck hurried back toward his goal, when Morata waited to pounce, and every part held on the road. The slightest error, the slightest pause, and it would all have been over: Germany would have been left counting on Spain’s good graces to make it to the last 16.

Schlotterbeck made the tackle, in fact, bundling the ball out for a corner, jumping to his feet and pumping his arms, his face a mask of fury, as if he had scored the winning goal as a substitute of preserving a 1-1 tie. Perhaps he knew quite how much was riding on that one moment, all of the conclusions and assessments and decisions that rested on his pace, his timing, his judgment.

In that moment, as Morata shaped to shoot, Germany’s journey in Qatar hung by a thread. Not one of the encouraging signs it had offered would have mattered within the slightest if he had not gotten there. There tend, sadly, to be no mitigating circumstances in failure. The margins is perhaps high-quality, however the realities that emerge as a consequence are diametrically opposed.

One consequence was nothing but darkness descending, the partitions closing in. Fortunately, Germany finds itself in the opposite, where there may even be a kindly last 16 draw, a probability of a quarterfinal, a chance to slay ghosts and, perhaps, seek glory. Germany has confronted its gloom. Now, after a tense, forlorn week, it could see hope over again.