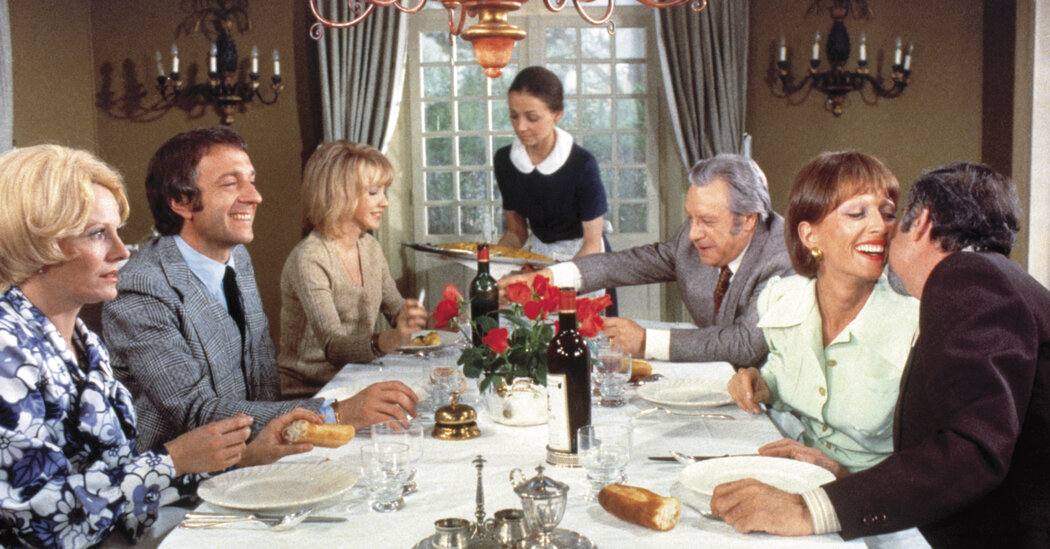 Luis Buñuel is a filmmaker with few peers and a singular profession trajectory. A hardcore Surrealist in Nineteen Twenties Paris and a propagandist for Republican Spain in the course of the Civil War, Buñuel found refuge within the Mexican film industry before making a triumphant, late-life return to France and the art cinema pantheon.

“The Discreet Charm of the Bourgeoisie” was Buñuel’s best industrial and important success, capped with the 1972 Oscar for best foreign film. Given a latest 4K digital restoration, it has been revived for a two-week run at Film Forum.

Buñuel, who died in 1983, intended “The Discreet Charm” as his last film (it was not), and it recapitulates certain career-long concerns. The movie is often described as a comedy of frustration wherein a sextet of well-heeled, super-civilized haute bourgeois (five French people and the ambassador from an imaginary South American country) repeatedly attempt and fail to take a seat down at dinner. As such, it elaborates on the thwarted desires that fuel two earlier masterpieces of his: “L’age d’Or,” made with Salvador Dalí in 1930, and Buñuel’s penultimate Mexican production, “The Exterminating Angel” (1962).

The movie is suavely irrational, predicated on interlocking dreams (and dreams inside dreams), in addition to assorted terrorists, gangsters and armed forces officers, together with a particularly obliging bishop (Julien Bertheau). Additionally it is an avant-garde sitcom. The boys are ruling-class criminals — although the ambassador (Fernando Rey) is much craftier than his French buddies (Paul Frankeur and Jean-Pierre Cassel). The 2 older women (Delphine Seyrig and Stéphane Audran) are ferociously poised fashion police; the group’s youngest member (Bulle Ogier) is a little bit of a wild card. Much of the humor relies on their inane observations and absurd sang-froid in a succession of increasingly awkward social situations. (Imagine a sensible tearoom running out of tea!)

A number of scenes of torture notwithstanding, American critics swooned for “The Discreet Charm.” Andrew Sarris called it “clearly the film of the 12 months.” Vincent Canby’s Recent York Times review hailed it as “the unique creation of a director who, at 72, has never been more fully answerable for his talents, as a filmmaker, a moralist, social critic and humorist.” While it is tough to disagree with this assessment, it’s possible to prefer Buñuel’s less digestible works — particularly “Viridiana” (1961), which sneaked past Spain’s fascist censors, and the low-budget Mexican movies that were, of necessity, directed against the grain.

“The Discreet Charm” shouldn’t be without its pleasures. Seyrig, Audran, and Ogier are magnificent farceurs. Buñuel is perhaps shooting fish in a barrel, but French manners have seldom been so expertly ridiculed. A number of of the movie’s pranks (an inconvenient death disrupts one dinner) still shock; others (Ogier parading around in Napoleon’s hat) remain laugh-out-loud funny. It’s fascinating to see Buñuel’s engagement with the Godard of “La Chinoise” and “Weekend” and even, within the casting of Rey, “The French Connection.”

And yet, while “The Discreet Charm” shouldn’t be exactly complacent, neither is it unreconciled. For all its unpatriotic and anticlerical jibes, the movie is just too expansively genial to be truly discomfiting. The Oscar is the tip-off, even when Buñuel did suggest that his producer had bribed the Academy to get it.

The Discreet Charm of the Bourgeoisie

Through July 7 at Film Forum in Manhattan; filmforum.org.