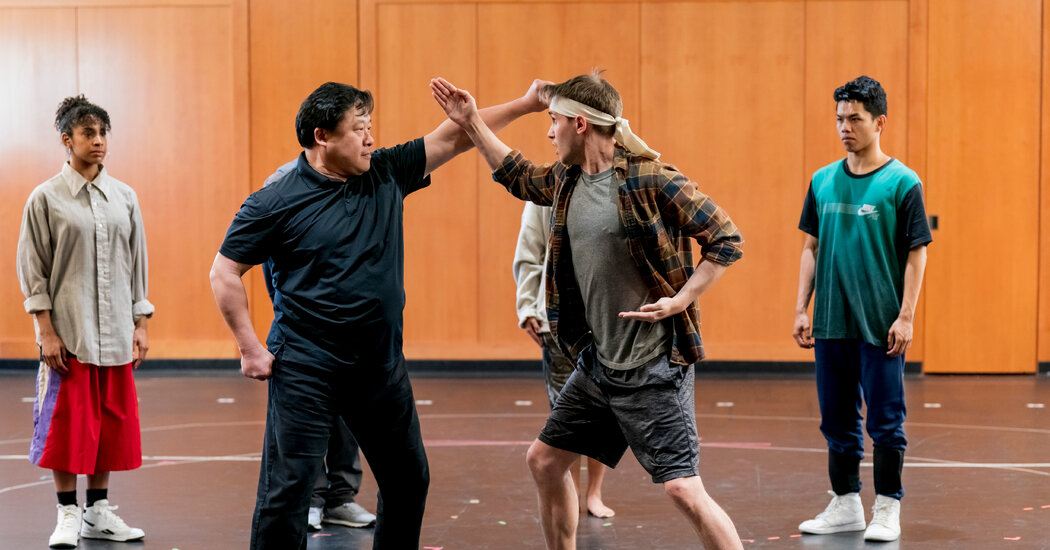 CHESTERFIELD, Mo. — Robert Mark Kamen was through with “The Karate Kid,” his semi-autobiographical 1984 martial arts film that spawned a string of films, an animated program and the hit Netflix series “Cobra Kai,” until he saw “Hadestown” in 2019. That’s when he realized: He loved musicals.

“If you watch a movie, the camera is restricted to at least one dimension,” Kamen, 74, said in early May during a break from rehearsals for “The Karate Kid — The Musical,” which is debuting at the brand new $25 million Kirkwood Performing Arts Center just outside St. Louis. “With this thing, you possibly can have three dimensions, people doing something [pointing] here, here, here, going up and down, around and around, all at the identical time. … It opened up so many possibilities.”

An inspired Kamen went back to his hotel — and wrote what would change into the opening of a recent musical, complete with taiko drums and dancing ancestors. He also called the one that’d sent him to Recent York as a homework task, the producer Kumiko Yoshii, who had been campaigning since 2016 for the rights to “The Karate Kid” franchise, which Kamen owned with Sony Pictures.

“He was so excited and had so many ideas,” Yoshii said. “But at the center of all of it was still the connection between Daniel and his mentor, Mr. Miyagi.”

The result’s a musical adaptation of the classic film a couple of teenage American boy (Ralph Macchio) who learns martial arts from an Okinawan-born janitor and karate master (Pat Morita, whose performance earned an Oscar nomination) to defeat a highschool bully. The musical stars John Cardoza (“Jagged Little Pill”) as Daniel LaRusso, the titular karate kid, and the Canadian actor Jovanni Sy as his mentor, Chojun Miyagi.

Though the plot closely follows that of the unique film — the story remains to be set within the Nineteen Eighties — the musical’s solid and inventive team of greater than 40 artists is markedly more diverse.

The director, Amon Miyamoto, was the primary — and stays the one — Japanese citizen to direct a show on Broadway (a 2004 revival of the Stephen Sondheim-John Weidman musical “Pacific Overtures”); Keone and Mari Madrid, the married Filipino American choreographers, have worked with Justin Bieber and Billie Eilish and recently directed and choreographed the Britney Spears jukebox musical “Once Upon a One More Time”; and the costume designer Ayako Maeda, has won quite a few awards in her native Japan. Kamen wrote the book, and the songwriter Drew Gasparini, known for his work on “Smash,” wrote the music and lyrics.

“It’s an American film,” the director, Miyamoto, 64, said in Japanese via an interpreter during a rehearsal break in early May. “But we’ve added Japanese elements.”

Those elements include putting a greater emphasis on Mr. Miyagi by framing the story as his recollection of events, which Kamen said was his original vision for the film before the filmmakers decided to concentrate on Macchio’s Daniel. There may be also a rating by Gasparini that blends pop, rock and Okinawan music; costumes featuring traditional Japanese attire, including a kimono, by Maeda; and a dance-heavy production that fuses the Madrids’ hip-hop choreography style with karate.

“There needs to be a reason to adapt it right into a musical,” Kamen said. “If we’re doing the exact same thing because the film, there’s no reason we’ve got to create this for the stage.”

INSIDE A FORMER CHURCH in Chesterfield, Mo., on a Saturday morning in early May, ribbons of sunshine shone through stained glass windows as a line of dancers fanned out like peacock feathers on either side of Sy, who was singing the song “Bonsai,” which extols the facility of patience and focus.

“Needles begin to bend,” he sang because the dancers undulated up and down, raising and lowering their arms in sync. Eventually, they’d be backlit to seem like a bonsai tree.

Kamen, among the many creative team on the rehearsal that day, thanked Keone Madrid, calling the scene “beautiful.”

“You then’re going to see ‘Strike First. Strike Hard.’ and need to run through a wall afterward,” a smiling Keone Madrid said, referring to the musical’s next song, a pulsing anthem with pounding drums and frenetic kicks and punches.

Kamen, at first, had been lower than keen on musicalizing his signature franchise. But after a couple of months of meeting requests from Yoshii, his agent persuaded him to have dinner together with her in Los Angeles in January 2017.

“The character of Mr. Miyagi spoke to me an incredible deal growing up,” said Yoshii, who was a highschool exchange student in Bozeman, Mont., when the film was released in theaters in 1984. “Due to Miyagi, kids talked to me in regards to the Japanese karate element.”

Because “The Karate Kid” is Kamen’s story, he was the natural alternative to write down the book, Yoshii said. There was only one problem: He didn’t know anything about musicals. “I called my agent, Jack Tantleff, and I said, ‘Now what the [expletive] do I do?’ I don’t know how you can do that,” he said. “He said, ‘You’ll learn.’”

Kamen and Gasparini, began meeting up in Recent York, where they’d see 4 shows every week. Then Gasparini, who’s from California, would spend time at Kamen’s guesthouse in Sonoma, with a conveyable piano, working on the rating.

Gasparini selected a mix of pop, rock and Okinawan music, which included traveling to Okinawa, Japan, in October 2019 to review with two musicians. Two songs for Mr. Miyagi feature a sanshin, a three-stringed instrument manufactured from snake skin. (For the war-hardened John Kreese, played by Alan H. Green, the antagonist and leader of the Cobra Kai dojo, he went with Metallica-inspired electric guitars.)

Capturing the essence of the characters from the film, who also include Ali Mills (Jetta Juriansz), Daniel’s love interest, and his mother, Lucille LaRusso (Kate Baldwin), can be the approach that Miyamoto said he tried to adopt in his direction. “With Kreese and Mr. Miyagi especially, we delve into what makes them who they’re, and the way they got that way,” he said.

Kreese, as an example, is a Vietnam veteran grappling with the lingering trauma of his experiences, and Yoshii said they wanted the solid to know what that meant.

So that they had, amongst others, a Marine veteran and a World War II historian (Mr. Miyagi is a World War II veteran) speak to the solid in regards to the two wars that come into play within the story.

“Robert’s script goes a bit deeper within the musical than the movie,” Yoshii said. “So it was like if we’re going to do this, we’ve got to consult with these guys, so the actors aren’t just doing what they think or what their imagination conjures up about what experiences are.”

But for the added gravity of each men’s wartime experiences, the film’s lighthearted center stays. The key weapon, Kamen said, is the choreography.

“The dance will likely be the thing that takes people by surprise,” said Cardoza, 28, who was a fan of the film growing up. “You’re thinking that ‘Karate Kid, combat fighting.’ You don’t think ‘dance.’”

During rehearsals last month, those two elements blended as 14 dancers playing Cobra Kai students, clad in shorts and kneepads, emerged from behind a semicircle of rolling mirrors. Green, stone-faced in a black tank top and sweats, prowled their ranks.

“Fear doesn’t exist on this dojo, does it?” he shouted.

“No, sensei!” they answered.

“Pain doesn’t exist on this dojo, does it?”

They launched right into a rock number, kicking, pumping their fists then turning outward and stutter-stepping forward like synchronized robots, all in a matter of seconds.

Mari Madrid said they approached the musical realizing that they weren’t going to make black belts out of the solid over a monthlong rehearsal period. “It was about giving inspiration to the essence of it,” she said. “Can they punch properly? Can they block properly?”

That’s to not say some solid members didn’t come prepared. Sy earned a brown belt in karate, and Cardoza, who does indeed do the crane kick, was a competitive figure skater for 15 years. (Sakura Kokumai, who represented america in the ladies’s kata event on the 2020 Olympics, was also brought in to show foundational moves.)

Keone and Mari Madrid are also liable for choreographing the movements of 5 recent characters, the spirits of fireplace, water, earth, tree and metal, who symbolize the tradition of karate. They shadow Mr. Miyagi’s movements, in a nod to the kuroko of Japanese Kabuki theater — actors clad in all black who the audience see but are trained to disregard, who magically make things occur onstage.

“Keone and Mari are in a position to infuse something that’s invisible into their visible dance,” Miyamoto said, adding that in Japan “we’re used to seeing reality onstage that way — he’s there, but I’m not seeing him. So it’ll be interesting to see how an American audience reacts to that.”

IN A BLACK POLO AND TROUSERS during rehearsals, Sy was an unassuming presence — until he began practicing a scene.

“What?” a resentful Cardoza asked.

He moved his right hand in a semicircle.

He repeated the motion along with his left.

“Wax on.” Sy did a slow-motion chest punch. Cardoza blocked it.

Cardoza’s eyes lit up with understanding.

Moments like this one, immediately recognizable to any “Karate Kid” fan, are as much an element of the musical because the fleshed-out story lines and infusion of dance, Kamen said.

“Nobody is coming to see this who doesn’t know ‘The Karate Kid,’” he said. “But they do not know how far out to the perimeters we’ve taken the song and dance.”

Among the many first to witness those changes will likely be a few of the original film’s solid members, who’re planning to be at opening night on Wednesday. They include Macchio and William Zabka, who played Johnny Lawrence, Cobra Kai’s top student and Daniel’s rival. Yoshii said there are plans to take it to Broadway next season.

“It’s Christmas morning once more for ‘The Karate Kid,’” Macchio said in a phone interview in mid-May. “It’s like unwrapping one other version of this gift. I need to be humming Drew Gasparini’s tunes on the method to the car parking zone.”