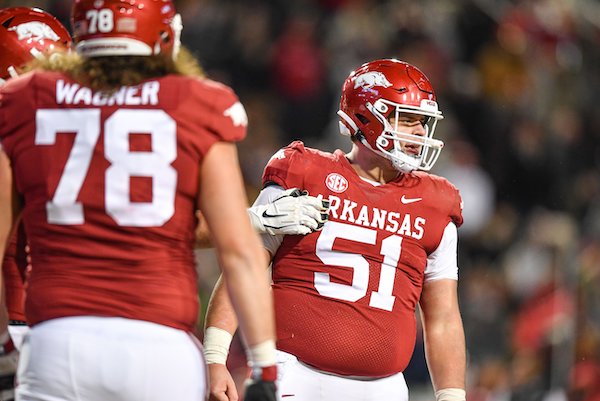 Moreover, defensive back Khari Johnson and defensive end Eric Thomas Jr. each announced they might be entering the NCAA transfer portal, which opens next Tuesday.

The Razorbacks (6-6, 3-5 SEC) are awaiting news of their bowl berth Sunday, getting a read on the roster they’ll bring to the bowl site and looking for a recent strength and conditioning coach.

“There’s going to be lots of motion happening, and it’s not only here, it’s in every single place within the country,” Pittman said last week to preview what was coming this week.

Former Razorback Kiero Small, now an assistant on the strength staff at Michigan under Coach Jim Harbaugh, and Ben Herbert, the previous strength and conditioning coach at Arkansas, interviewed with Pittman on Monday. Other candidates are also in the combination.

Stromberg, a fourth-year senior from Tulsa who made preseason All-SEC teams, bypassed early entry for the draft last season but elected to forgo a possible bonus 12 months at Arkansas. A source near the situation said Stromberg, who has 44 profession starts, won’t play within the Razorbacks’ bowl game.

Stromberg thanked Pittman, Cody Kennedy and Brad Davis, his current and former offensive line coaches with the Razorbacks, in his announcement on social media. He also thanked the fans.

“You guys made the last 4 years unforgettable and I’ll cherish every moment I’ve had here,” Stromberg wrote.

Bauer, a redshirt senior from Magnolia, Texas, averaged 43.3 yards per punt last season while also winning the Mortell Award because the national holder of the 12 months. He threw a touchdown pass to Blake Kern at Alabama and ran for a primary all the way down to arrange a field goal against LSU.

This season he averaged 44.6 yards on 23 punts, with a profession long of 78 yards, as the first punter in the course of the second half of the 12 months, replacing freshman Max Fletcher.

He thanked Pittman and special teams coordinator Scott Fountain and wrote, “Thanks Arkansas for a few of the very best years of my life, I’ll perpetually be a hog!”

Johnson, a real junior from Boston, made three starts this season at defensive back as a part of a unit that had to combine and match and cross train all season on account of a plethora of injuries. He played in nine games in 2020, including one start at cornerback, participated in five games in 2020 and in 10 games this season.

Johnson ranked thirteenth on the team with 25 tackles, 10 of them solo, and had 1 pass breakup. He didn’t play in last Friday’s 29-29 loss at Missouri.

Thomas is a real junior from Pensacola, Fla. The 6-3, 253-pounder played in 11 games this season, totally on special teams, and recorded two assisted tackles.

Pittman said he expects lots of player transactions this winter, which incorporates the early signing period from Dec. 21-23, in addition to portal movement in and out.

Receiver Jadon Haselwood, a junior, announced late Monday he can be declaring for the NFL Draft reasonably than returning as a senior, presumably taking him out of bowl preparations for the Razorbacks.

Haselwood, a one-year transfer from Oklahoma, caught not less than three passes in every game and finished with a team-high 59 receptions for 702 yards. He caught three touchdown passes and averaged 11.9 yards per catch while fidgeting with an AC joint injury in his left shoulder throughout the season.