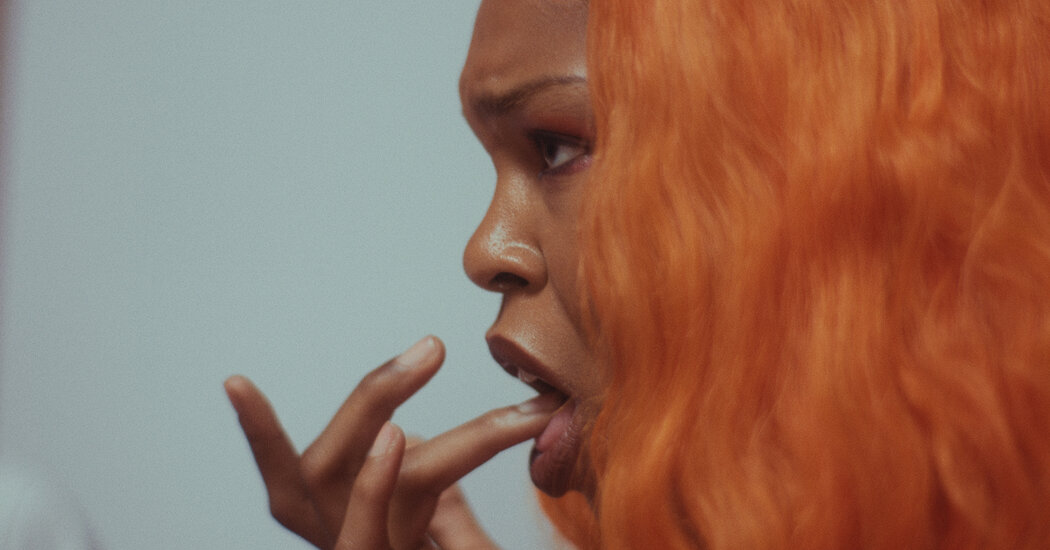 Martine Syms’s “The African Desperate” begins on the last day of art school for a Master of Fantastic Arts student named Palace. She’s facing the ultimate critique from a committee of 4 instructors who sit in her studio, lobbing comments about her work — some earnest, some passive-aggressive, altogether a bit bewildering.

“It’s been interesting having you within the sculpture department.” “Where are you going to go together with this?” “You’re afraid of your individual appetite. It’s all a bit polite, isn’t it?” “Where’d you grow up? West Side Chicago?”

Palace — played by the artist Diamond Stingily, with vibrant orange hair and a deadly deadpan — holds her own. She calls out problematic questions, quoting Saidiya Hartman and others. Then, at a seemingly arbitrary moment, it’s throughout: She passed.

“The African Desperate” stakes out latest terrain within the rarefied area of interest of films featuring art schools. Unlike many movies set adjoining to the art world, it focuses on a Black protagonist and avoids the cliché of “making it big” amid unfathomable pretension — a satirical staple of films like “Velvet Buzzsaw,” “Pecker” and “The Square.”

Syms, a thriving artist who currently has multiple shows on, drew upon her time as an M.F.A. student at Bard College and years of teaching in universities and other settings. Syms remembers each feeling invisible and protruding in white-dominated skilled spaces on the upstate institution.

“It’s not even impostor syndrome, since you’re doing the stuff and also you’re there,” she said in an interview. “But even now I get people I went to high school with who were like, ‘You weren’t even making art after we were at school.’ And I’m like, ‘No, I used to be literally in film class with you!’ So I desired to capture this sense of not being seen sometimes,” Syms said last month, prematurely of the film’s streaming release Friday on Mubi.

Her portrayal of art school pulses with the energy and humor of Palace and her friends, nevertheless it’s also a story of emotional survival.

“It’s a superb lampooning of art schools, nevertheless it also felt like a catharsis in a way,” David Velasco, editor in chief of Artforum, told me. “A number of the best art is someone who’s working through something they experienced that they’ve contradictory feelings about it.”

Syms, who co-wrote “The African Desperate” with Rocket Caleshu, created the part with Stingily in mind. The 2 connected at a Chicago bookstore and humanities space Syms was running called Golden Age, and the director has solid the performer in other works. Syms, Stingily and Caleshu all drew on their experiences navigating skilled spaces, and Palace, like Stingily on the time, also has the family responsibility of an ailing mother.

Syms and Stingily would talk and laugh about how they might reply to situations.

“She was like, ‘Man, I don’t know what I’d have done in that program!’ Because among the things that I experienced were really out of pocket,” Syms said.

As a substitute of a standard dramatic arc, “The African Desperate” exists within the moment with Palace. She’s ready to go away, but people keep coaxing her into hanging out. Her closest friend drives her to a lake to decompress; one other friend buzzes with anticipation for the massive graduation party; and there are last-chance flirtations with a man who hasn’t made a move all summer.

The film’s style zigs and zags with Palace’s conversations. It captures her very funny shorthand with friends and colleagues, using pop-up memes and head-on shots for phone dialogues. Syms said she had wanted to point out “how talkie talkie talkie every little thing is” in art school.

It’s a pointy contrast with the kind of “Art School Confidential,” the 2006 feature directed by Terry Zwigoff and written by Daniel Clowes (“Ghost World”). Clowes adapted the story of a starry-eyed art student, Jerome (Max Minghella), from a 1991 comic, loosely based on experiences on the Pratt Institute. The film is ready on a cruddy, crime-ridden urban campus where a killer is on the loose.

Zwigoff and Clowes’s acerbic satire leans into caricature: a horn-dog roommate, a pretentious instructor (John Malkovich) who draws only triangles (“I used to be considered one of the primary”), an overbearing wannabe director with a “Film Threat” T-shirt. There’s a simmering skepticism about idolizing anyone, from a once-great alcoholic recluse (Jim Broadbent) to an boastful art-star (Adam Scott).

“Art School Confidential” was partly shot at Pasadena City College, which Syms attended. She liked the comic — and remembers getting caught in middle school reading Clowes’s books — however the movie “is just not my favorite.”

“I believe it’s within the canon,” Syms said. “But it surely’s also a couple of white guy, which nearly every art movie is about.”

In her own time at art school, Syms said she saw precious little work by Black artists and filmmakers, like Edward Owens. “I remember really leaving school feeling — and never in any dejected way, just as a fact — I just don’t think I’m an artist,” Syms said.

“The African Desperate” centers on Palace’s experience and subjectivity. The title comes from a verbal slip in conversation with Syms when Stingily meant to say “the African diaspora.” Syms remembered the accidental phrase and located it “evocative of the mood and what it appears like sometimes to be a part of the diaspora in those spaces.”

Palace does go to the party everyone’s talking about. It’s a happily spacey affair in a cavernous half-empty studio space. It may not appear to be much, but that’s also a part of Syms’s realism. (“That was one scene I actually didn’t wish to be movie-fied, since it’s not a cool party! You’re upstate and there’s perhaps 10 people you hang around with.”) Palace’s studio within the opening scene, for instance, is a collage of life and art in progress, populated with books and Tarot cards and art materials (including long locks of hair she works with).

Perhaps since it’s Diamond’s last day on campus, we see fewer artists at work than in one other film featuring an art school: Kelly Reichardt’s “Showing Up,” which recently screened on the Latest York Film Festival.

Michelle Williams plays a Portland ceramist, Lizzy, who’s ending a group for her imminent show at a gallery on the town. The camera traces her gaze as she considers the pieces in her home studio. We also see the hive of student activity at the humanities college, where she works as an administrator.

“I used to be watching next to a friend of mine I went to RISD with, and we talked about how authentic the scenes felt to us,” Cynthia Lahti, the Portland artist who made Lizzy’s works, said, referring to the Rhode Island School of Design. “The way in which studio work flowed into the hallway. The painting class, the person throwing on the wheel, the material people wringing out cloth and hanging it up.”

Syms’s film shares this embrace of the numerous creative energies in flux at an art school. The “African Desperate” solid includes plenty of practicing artists, and the effect is effervescent without feeling gratuitously eccentric.

“It’s not portraying this already joke-fied version of the art world,” Velasco said. “‘The African Desperate’ is portraying art school, nevertheless it’s doing it as an artwork itself.”

Syms’s film doesn’t pretend that Palace emerges unscathed from her experience. “I mean, people out here actually need me to get mad,” the character says early on, evoking an entire history of aggravation before the film’s 24 hours. “And it’s like, I don’t wish to fight you.”

But when the movie doesn’t offer a blandly completely satisfied ending, it affirms that a story has begun that only Palace can truly tell.