‘The Hours’ Becomes an Opera. Don’t Expect the Book or Film. 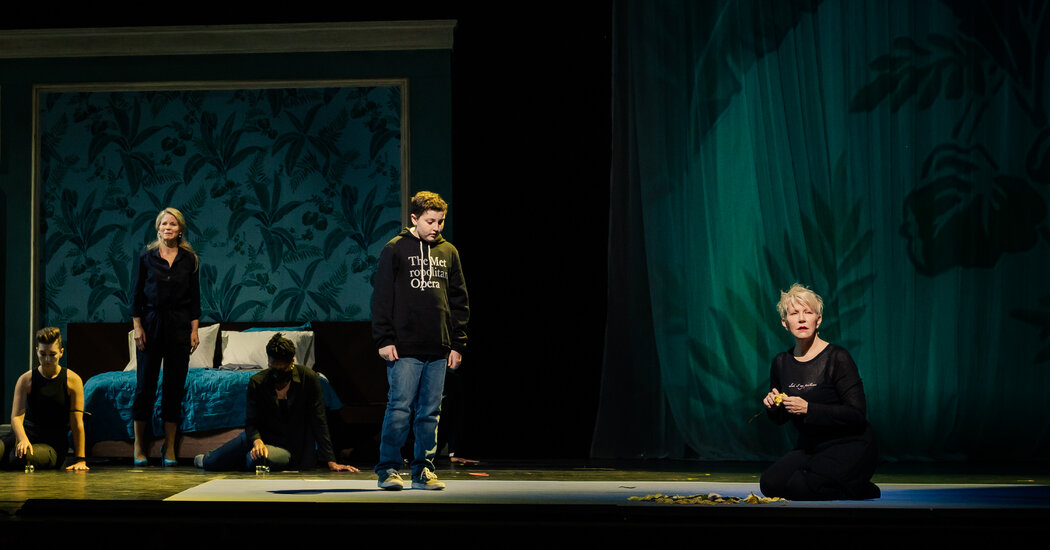 “I feel it must be more surreal,” the conductor Yannick Nézet-Séguin said from the orchestra pit of the Metropolitan Opera on a recent afternoon.

The scene onstage was nothing but surreal — fragmented light beams suggesting a proscenium; towering, billowing curtains lit in dreamy shades of blue, their translucence revealing the impression of a constructing facade beyond. Yet Nézet-Séguin, the Met’s music director, was more taken with one other element: the chorus, offstage and coloristic, an otherworldly fixture of an otherworldly environment.

None of that’s harking back to “The Hours” in its earlier iterations: Michael Cunningham’s Pulitzer Prize-winning 1998 novel; or the 2002 Stephen Daldry film, which was defined as much by its tensely churning Philip Glass rating as by its Oscar-bait trio of leading stars, Nicole Kidman, Julianne Moore and Meryl Streep.

But that is “The Hours” as adapted from each the book and the film by the author Greg Pierce and the composer Kevin Puts. It’s rendered as only opera may be: with an interplay of divas — Renée Fleming, Kelli O’Hara and Joyce DiDonato — who’re enveloped by a restless and plush orchestra, and share a dream space with an ensemble of dancers who guide and observe them in Phelim McDermott’s staged premiere of the work, which opens on the Met on Tuesday.

“Once I met Michael Cunningham,” Nézet-Séguin recalled, “he said that as a author, words for him must be sequential. You may’t superimpose words. But that’s where opera can melt and create parallels with the stories in real time.”

AS A NOVEL, “The Hours” accommodates three interwoven stories, each unfolding for probably the most part quietly, over the course of a single day: Virginia Woolf struggles with depression while writing “Mrs. Dalloway”; Laura Brown, a homemaker in Southern California in 1949, feels oppressed by small tasks like baking a cake while just wanting to read that novel; and Clarissa Vaughan, an editor living in Recent York City half a century later, seems to embody “Mrs. Dalloway” as she prepares a celebration for her friend and former love Richard, a poet ravaged by AIDS.

Fleming “loved, loved, loved” the Daldry film, she said in an interview over the summer. Some had thought she had made her farewell to staged opera in 2017, because the Marschallin in Strauss’s “Der Rosenkavalier,” certainly one of her signature roles. But she was quickly on the lookout for a recent project on the Met, and her right-hand man, Paul Batsel, suggested an adaptation of the story by Puts. Fleming was into the thought; so was Peter Gelb, the Met’s general manager.

The work would require three singers on the extent of the film’s stars. Fleming took on Streep’s role, as Clarissa; then got here DiDonato as Virginia Woolf (played by Kidman within the movie); and, Kelli O’Hara as Laura (Moore). O’Hara has made a profession as a decorated Broadway star but is such an opera natural that she was the highlight of Mozart’s “Così Fan Tutte” in 2018.

“I remember reading the book so hungrily,” she said. “The commentary on this time period, the survival, mental health, which I feel is so appropriate at once. It just spoke to me so deeply.”

In writing the opera, Pierce and Puts exploited what previous types of the story couldn’t. “Some movies have tried simultaneity,” Puts said. “But due to nature of harmony and rhythmic notation, you may have things overlap here, and that’s very exciting. What you could have to make a decision on is one form of primary backdrop, musically, that unifies them. And that became interesting for me.”

Puts’s rating — which is written through, eclectic and soaringly lyrical — accommodates dreamy touches befitting the fluid nature of Pierce’s text, which has nearly 30 scenes that dissolve out and in of each other. A countertenor role, sung on the Met by John Holiday, through which the singer appears in several guises, may be seen as something like an angel of death or ferryman. A children’s chorus that Richard, the dying poet, hears in his head seems to be the nieces and nephews of Virginia Woolf, holding a funeral for a bird. Other recursive phrases include music related to Virginia that Clarissa overhears from a church choir.

“What’s the meaning of that?” Puts said. “I’m not even sure what the reply is, but I feel that’s what may be interesting.”

Haunting the music is Glass’s Minimalist soundtrack for the “Hours” film. Puts called it “a wonderful rating,” and recognized the danger in putting up his own work against it. “It’s almost like, would you write a ‘Star Wars’ opera?” he said, referring to John Williams’s famous music for that franchise. “No, I wouldn’t. It could be the dumbest thing on the earth since it’s so iconic.”

But, Puts added, while there are suggestions of a Minimalist style within the “Hours” opera — not for the primary time in his compositional profession — the work organically developed into something else. “The opera is so different that it’s its own thing,” he said. Nézet-Séguin described the rating as having “barely enough Minimalism,” but bringing “it to a different, more lyrical, approach.”

With the solid in place early, Puts tailored the rating to Fleming, DiDonato and O’Hara. “I imagine should you’re writing a screenplay and you recognize Robert De Niro goes to play this character,” he said, “then every line you write, you imagine him delivering it.” And, he added, he’s completely satisfied to reflect the specificity of their sounds and revise accordingly during rehearsals somewhat than plan for later productions and casts: “In a case like this, I’m not as concerned in regards to the future.”

All three stars have responded positively to the best way their roles sit of their voices. This summer, DiDonato said that while reading through the rating, she would tell herself, “Oh, Kevin, that’s the cash note.” And Fleming, who has worked with Puts before — “He knows my voice very well” — said that his writing was singer friendly, with phrases separated, “so that you’re not likely stuck in a high register or a difficult tessitura consistently.”

Puts developed a sound world for every woman. Clarissa’s, he said, is quintessentially American. Virginia’s draws on piano and a decorative language befitting an earlier time within the English countryside, but with a winding harmony that, he hopes, evokes Woolf’s writing. Laura’s music, nevertheless, is more like that of her husband — of darkly cheery post-World War II domesticity that becomes something of a jail for her to flee from. All three come together within the finale, in a succession and layering of fashion.

Nézet-Séguin conducted the world premiere with the Philadelphia Orchestra in March, and felt, hearing it for the primary time, that “Kevin got a lot right.” A couple of things have modified between then and now: the tessitura of the chorus, as an illustration, and a few cuts together with additions. Crucially, the Met’s presentation is different simply for being staged.

McDERMOTT, whose Met credits include blockbuster productions of Glass’s “Satyagraha” and “Akhnaten,” had been told that the opera’s constant shifting of time and place would make it “unattainable” to direct. Yet he took it on, joined by the choreographer Annie-B Parson, the mind behind the infectiously exuberant movement in David Byrne’s “American Utopia.”

“It’s like directing three operas on top of one another,” McDermott said. “There are such a lot of scenes, and it’s filmic, so you’ll want to get from place to put in a way that’s enjoyable somewhat than holding weight.”

McDermott and Parson have long been at work on “The Hours,” including a workshop over the summer, months before the singers arrived for rehearsals. “I used to be given time with the dancers first,” Parson said, “which was very luxurious.” She didn’t find yourself using every part but experimented with having them “defy the load of the architecture” in magical ways in which included blowing sets with their breath to maneuver them, or occupying the set like cats — observational and unattainable to read.

Parson said she has been guided partially by Woolf herself. “Experimentation was the center of labor,” she said. “That was at all times on my mind — gender fluidity, feminism — and I wanted to begin together with her.”

The dancers, McDermott said, “set the atmosphere of the scenes.” They’re involved with maintaining the motion’s momentum, but in addition they move with a vocabulary that is typically in harmony with scenes across time, like spirits. The choreography, Parson said, is “an embroidery of those worlds.”

Every week before opening night, the opera’s many moving parts were still finding their places. There was talk of many tears during rehearsals, but there has also been laughter. An emotional high point — Richard’s suicide by falling out a window — was a clunky comedy of errors that had DiDonato, who was watching from a seat within the auditorium, joking, “Guffman called.”

McDermott referred to this because the moment that is available in any rehearsal process when it’s difficult to avoid pondering, “Oh my God, we’ve taken on an excessive amount of.”

Then, he added, something tends to occur. “You wish all of the performers and musicians to be resonating with one another in an ideal, beautiful way,” he said. “Then the piece begins to talk to itself. But what I’ve noticed is, it doesn’t really turn up until the audiences comes. That’s once you’ll see how strong the atmosphere may be.”