The Jan. 6 Hearings Did a Great Service, by Making Great TV 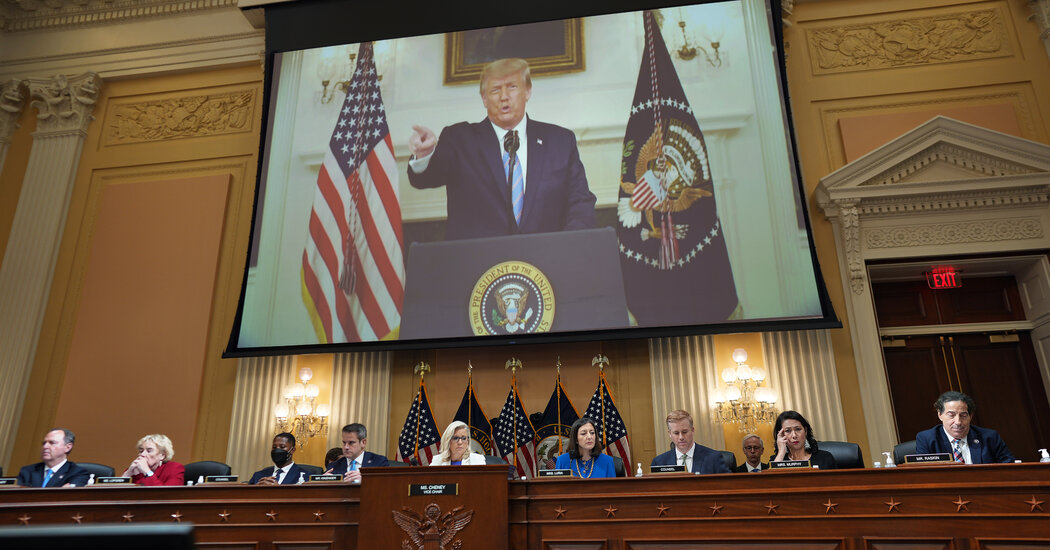 Every latest summer TV series has to fight to get attention. The Jan. 6 hearings had more challenges than most.

There was public exhaustion and media jadedness over a story that’s been within the news for a yr and a half. There was the MAGA echo chamber that has primed an enormous chunk of America to reject, sight unseen, any accusation against former President Donald J. Trump.

Above all, the hearings, which aired a capstone prime-time session on Thursday night — a midseason finale, in case you will — needed to compete with our expectations of what constitutes a “successful” TV hearing. Not every congressional inquest could be the Army-McCarthy hearings, wherein the lawyer Joseph Welch asked the Red Scare-monger Senator Joseph McCarthy, “Have you ever no sense of decency, sir, in the end?”

These hearings, in an era of social-media cacophony, cable-news argument and glued political camps, were never prone to construct to a cinematic climax that will unite the general public in outrage. Yet by the standards of today, they’ve achieved some remarkable things.

They drew an audience for public-affairs TV within the dead of summer. They reportedly prompted further witnesses to come back forward. Polling suggests they even moved opinion on Mr. Trump and Jan. 6 amongst Republicans and independents. They created riveting — and dare I say, watchable — water cooler TV that legitimately mattered.

And make no mistake: The hearings, produced by James Goldston, the previous president of ABC News, succeeded not only through good intentions but additionally by being well-made, well-promoted TV. They could have been a most unusual eight-episode summer series (with more promised in September). But they’d elements in common with any good drama.

Whenever you consider congressional hearings, you’re thinking that talk, talk, talk. Hours of witnesses leaning into microphones. Countless round-robins of representatives grandstanding. The Jan. 6 hearings, alternatively, recognized that TV is a visible medium, and that images — just like the footage of the assault on the Capitol — can say greater than speechifying.

The editing and graphics were more the stuff of a high-gloss streaming documentary than anything we’re used to seeing from the U.S. Congress. Diagrams of the Capitol showed how close we got here to catastrophe, metaphorically and physically. Using mostly interview snippets, deftly cut together, the July 12 hearing delivered to life a White House meeting wherein Trump loyalists floated “unhinged” gambits for seizing the election apparatus — the oral history of a cabal.

Thursday, in a meta device befitting a president who was made and swayed by TV, the committee showed onscreen what the president saw in real time within the over two and a half hours he spent watching Fox News and letting the violence play out. A graphic dropped us into the manager dining room, from the standpoint of the president in his customary spot facing the tube.

Later, we saw outtakes of a sullen Mr. Trump the day after the attack, shooting a cleanup video meant to deplore the violence. He rejected the road “The election is over,” stumbled over words, smacked the lectern in frustration. For many years, Mr. Trump thrived through media appearances and flattering editing on “The Apprentice.” Now the TV president was exposed by his own blooper reel.

Every TV series needs to inform viewers why they need to care. The Jan. 6 committee had a ready answer: Americans should care about our free, democratic elections. They usually should care when the losing party tries to toss out the final result in an extra-constitutional bonus round.

However the hearings also repeatedly made clear that this was not about an abstract principle or a foul thing that happened previously. This was an energetic threat. The conservative legal scholar J. Michael Luttig warned in a June hearing that Mr. Trump or a like-minded successor could “try and overturn the 2024 election in the identical way.”

And the vice chairwoman, Liz Cheney, Republican of Wyoming, used her remarks to underscore the immediacy. When she reported at end of the July 12 hearing that Mr. Trump had recently tried to contact a possible witness, her remarks were a warning to the previous president, but in addition they had the texture of a cliffhanger: The goal was still at large and still at work.

Starting the primary hearing with footage of the mayhem on the Capitol was an unusual alternative by congressional standards. But it surely was familiar to anyone who watches TV mini-series — the in medias res opening, dropping you on the scene of the crime after which doubling back to trace, step-by-step, episode by episode, the actions that brought us to this pass.

Each hearing, just like the installments of a streaming thriller, focused on a discrete aspect of the attack on the election — the pressure on state governments, the incitement of the mob, the involvement of right-wing hate groups — each constructing on the last and drawing connections. Thursday night, the narrative got here full circle, returning us to the climactic day, this time from the guts of the White House.

The committee interviewed a whole bunch of witnesses. It put only a fastidiously chosen few on live TV.

What you didn’t see, by and huge, were political adversaries of the previous president. We heard from Republicans and staffers who agreed with Mr. Trump politically but rejected his attempted power grab, and from sympathetic outsiders like election staff and cops. Not to say Cassidy Hutchinson, a former aide to the previous White House chief of staff Mark Meadows; political thrillers love a surprise witness.

Around them, the committee assembled a supporting forged of figures, recorded on video or audio, and let their voices tell the story. Mr. Trump’s attorney general, William P. Barr, saltily dismissed his ex-boss’s conspiracy claims. Richard P. Donoghue, who had been acting deputy attorney general, colorfully recalled shutting down the environmental lawyer Jeffrey Clark, whom Mr. Trump considered naming as a loyalist attorney general: “How about you return to your office, and we’ll call you when there’s an oil spill.”

As in a drama like “Succession,” this created a universe of recurring characters — allies, antiheroes, antagonists — and situated viewers inside a network of relationships and emotions. And identical to with “Succession,” you didn’t must admire everyone onscreen to be captivated.

But even an enormous ensemble needs focal characters. The chairman, Representative Bennie Thompson, Democrat of Mississippi, opened and closed the sessions with heavy-hearted urgency. But it surely was Ms. Cheney who became the voice and face of the panel.

Ms. Cheney has a serious tone and a just-the-facts affect but additionally a pointy sense of tips on how to use the highlight and hook an audience. She served as narrator, offering up quotable drive-by taunts (she described Mr. Trump taking advice from “an apparently inebriated Rudy Giuliani”) and teasing coming attractions as if defying viewers to the touch that dial. She could possibly be dryly devastating, saying, “President Trump is a 76-year-old man. He isn’t an impressionable child.”

For taking up Mr. Trump, Ms. Cheney has risked her possibilities of winning a Republican primary for re-election. This summer, she played her part like someone who believed she might get just one season.

The hearings created a form of self-contained alternate universe, wherein members of each parties agreed that Joseph R. Biden won the 2020 election and that Mr. Trump was improper to attempt to overturn it. But this was possible partly since the Republican leadership, having first tried to place Trump ride-or-dies on the committee, declined to call any members.

This freed the committee and Mr. Goldston to do a rare thing in a contemporary congressional hearing: create a unitary narrative with a sustained argument, without one wing of the committee attempting to kick up dust and derail the trouble. Future committees may try to mimic this broadcast, but their detractors may not give them the identical opportunity. This may increasingly be another TV success that proves difficult to mimic.

Mr. Goldston and the committee knew they’d a thriller on their hands — conspiracy, backbiting, violence, even dark comedy — and so they let it play like one onscreen.

This meant balancing a serious argument — that Jan. 6 was the culmination of an effort to seize power, first through political maneuvering, then through muscle — with the kinds of colourful moments and details that get people buzzing. People care about ideas and principles. But they connect with character, to incident, to vivid images.

So together with the story of a president goading an armed mob to march on the Capitol, we got the mental image, from Ms. Hutchinson’s testimony, of “ketchup dripping down the wall” within the White House after Mr. Trump threw a plate in rage. Together with Thursday’s horrifying video and audio of Secret Service agents fearing for his or her lives, we got the diptych of Senator Josh Hawley, Republican of Missouri, first saluting the mob with a raised fist, then fleeing the assault, helpfully spotlighted on surveillance footage.

The hearings gave us each the tragedy of Jan. 6 and the absurdity, the fear and the irony, the blood and the ketchup.

The strongest story on this planet means nothing if nobody is being attentive. The hearings were made — and, unusually for a congressional broadcast, promoted — with a keen instinct for a way audiences today turn out to be fascinated about TV and the way they discuss it.

The committee and its members posted teaser video clips on social media to spike interest. They offered recaps and previews, just like the “Previously” and “Next week on” trailers that bracket prime-time dramas. They promised video that was “never before seen,” three magic words to excite media interest.

And the proceedings were stacked with clips and anecdotes perfect for late-show monologues and social media sharing, which generate a secondary audience and free promoting. Inside minutes of the Hawley clips’ airing, social accounts screen-grabbed them for jokes and scored them to “Yakety Sax” and the “Chariots of Fire” theme. (The pictures aired just before a break, as if, because the pop-culture critic Linda Holmes noted on Twitter, to provide the web time to go to work.)

To paraphrase Carl von Clausewitz, it was the continuation of politics by other memes.

Trust within the audience

Ultimately, the hearings had the identical job as that of any ambitious TV drama: to make a fancy story coherent. But in addition they needed to inform a whole story intimately — Thursday’s broadcast, like many a season finale, ran longer than usual — and have faith that, given signposts and a powerful voice, viewers would stick it out.

There have been loads of reasons these hearings might flop. Everybody knows that summer TV audiences want “Stranger Things” escapism, not sobering reality. Hearings rarely make a dent in public opinion anymore. Persons are jaded, exhausted, disillusioned, resigned.

And yet loads of them watched. If the hearings find yourself accomplishing greater than expected, it might be because they’ve expected more of their audience. Nonetheless many reasons there are to be cynical, the committee took its shot, told its story and trusted that we still had decency, in the end.