‘The Lord of the Rings: The Rings of Power’ Is Shiny but Not Yet Precious 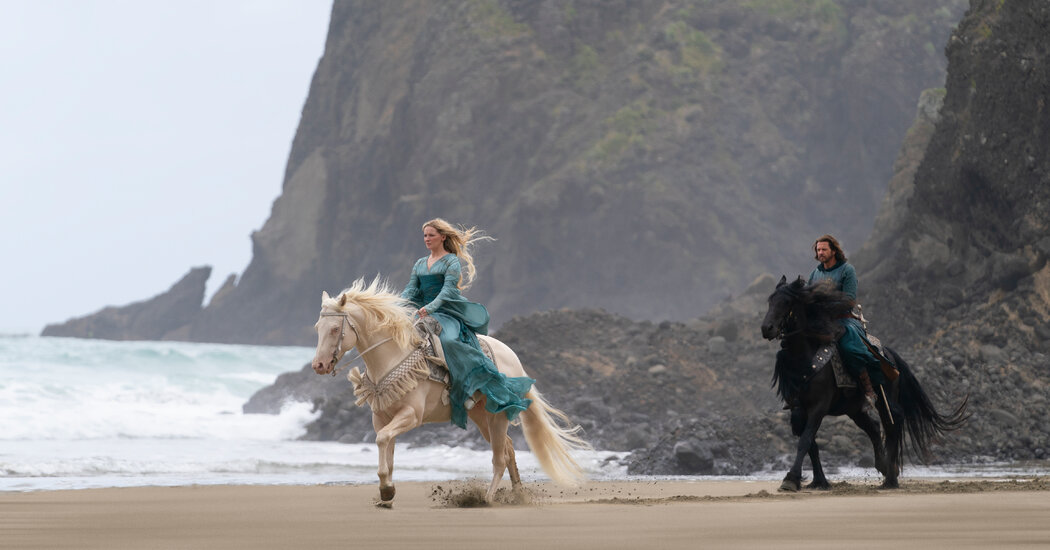 In “The Lord of the Rings: The Rings of Power,” premiering Thursday night on Amazon Prime Video, it buys a variety of grandeur: lavish landscapes, lofty and subterranean palaces, orcs by the bushel, chaotic battles and even, as if to send a message to the series’s current fantasy competition, a sky stuffed with wheeling and menacing dragons. The costliest series in TV history wears its price tag on its face. (The precise amount of Jeff Bezos’ hoard being spent on “Rings of Power” has varied in reports, however the consensus is it will make Smaug a snug bed.)

What money cannot buy is inspiration. Within the growing field of franchise-based TV, it is usually meant to do the alternative: You’re buying the rights to provide tens of millions of fans one other helping of whatever they’ve already eaten up.

“Rings of Power” isn’t any different. It turns the clock back hundreds of years before the events of J.R.R. Tolkien’s “The Lord of the Rings” trilogy and the Peter Jackson movie adaptations, to the era when the fateful magic knickknacks of the title were forged. And its first season offers fans well-executed versions of familiar things: balletic archery, squabbling frenemyship amongst elves and dwarves, a rising evil, even a tempting, cursed artifact.

But when the ambitious first season doesn’t reinvent the ring, it’s a wide ranging reproduction that adds a number of latest filigrees. It immediately conjures the visual spell of the flicks. More vital, it manages, eventually and infrequently, to create its own swashbuckling, storytelling magic.

The sense of “the identical thing, but different” comes immediately across with the (re)introduction of the powerful elf Galadriel (Morfydd Clark). Cate Blanchett played her within the movies as a sensible, stately Lady of the Canyon, but a number of millenniums can change an individual. Here she’s a young, headstrong and deadly warrior, with “Crouching Tiger” moves and a conviction that Sauron, the once and future big bad, remains to be alive and plotting.

The literary universe built by J.R.R. Tolkien, now adapted right into a latest series for Amazon Prime Video, has inspired generations of readers and viewers.

Due to arcane legal spells and incantations limiting its rights agreement, “Rings of Power” is working at Tolkien’s margins, using the six appendices to his trilogy as source fodder. Where Jackson got to adapt three novels wealthy with character, sacrifice and comedy, the showrunners, J.D. Payne and Patrick McKay, have a Wikipedia-like mishmash of family trees and invented alphabets that describes the series’s time period, the Second Age, this manner: “Of events in Middle-earth the records are few and transient, and their dates are sometimes uncertain.”

But blank spaces leave room for creation. And Tolkien was also considerate enough to create several characters who’re naturally immortal, including elves like Galadriel and likewise her half-elven comrade Elrond (Robert Aramayo). He’s now a young aide to the high king Gil-galad (Benjamin Walker), who sees Galadriel’s Sauron obsession as a nuisance. Elsewhere, Payne and McKay have squished up the timeline, reworked mythology and filled in lots of gaps with invented characters and settings.

There might be great sagas written within the Tolkienosphere in regards to the liberties they’ve taken. But while I’m a middling-level Middle-earth-ophile (have read “The Silmarillion”; don’t speak Quenya), I’m reviewing a TV show. And in its look, themes and sound (celestial rating by Bear McCreary and theme by Howard Shore), this show is, if not 100% Tolkien, then definitely Tolk-ish.

And the show’s differences from the books could also be less important here than their differences from Jackson’s movies. A multiseason series can’t live within the operatic intensity of a fantasy film; it needs to construct a world, evolve character and develop story arcs over time.

In order Galadriel seeks allies in her hunt for Sauron, the 2 premiere episodes, directed luminously by J.A. Bayona, establish several story lines with Entish deliberateness. (Númenor, the Atlantis-like kingdom of humans whose rise and fall dominates the Second Age, doesn’t even figure into the opening hours.)

The ruling elves, who live in a series of Thomas Kinkade paintings, have their very own ambitions. These involve sending Elrond to barter a pact with Durin (Owain Arthur), the gruff dwarf prince of Khazad-dûm — within the movies, a smash with a nasty Balrog infestation but here a thriving, cavernous marvel. And in an outpost deep in human country, the elf warrior Arondir (Ismael Cruz Córdova) nurses a forbidden crush on a mortal healer, Bronwyn (Nazanin Boniadi), whose downtrodden neighbors picked Sauron’s side within the last war.

To this point, so high-fantasy. But as Tolkien realized, without characters of human scale (or smaller) which have the spark of personality, the doings of the high and mighty risk becoming stiff. (This can be a lesson up to now lost on HBO’s “House of the Dragon,” which practically begs for an Arya Stark or Hot Pie to chop the genealogical grimness.)

That’s where the hobbits are available in — or here, the Harfoots, a woodsy, secretive, nomadic band of small wanderers who live more precariously than their domesticated descendants did in Bilbo’s Shire. Nori Brandyfoot (Markella Kavenagh) is a variation on one other Tolkien type: the young dreamer who longs for adventures. Someday, fate serves one up in the shape of a meteor. In its burning crater she finds a mysterious stranger (Daniel Weyman) with wizardly tendencies, whose identity stays a riddle. (Speak, friend, if you may have a guess.)

The invented exploits of the Harfoots and their star-man guest may drive purists batty. I don’t care; they provide heart and a standard touch to a story that would otherwise quickly grow to be a live-action unicorn tapestry. And the Harfoots’ casting, together with that of the opposite denizens of Middle-earth, foregrounds more female characters and actors of color than the movies did, though the story stays thoroughly grounded in European myth.

A part of the appeal of Tolkien’s stories is their unembarrassed earnestness, their willingness to deal in good and evil and matters of honor; they’re anti-modern, anti-antihero. This might make “Rings of Power” an outlier within the TV-fantasy environment post-“Game of Thrones,” whose good-guys-get-decapitated ethos was in some ways a response to Tolkien. “Rings of Power” keeps up with “Thrones” in the quantity of blood spilled — each human-red and orc-black — but its sensibility is much more idealistic.

Still, there are small signs of ethical shading within the early going — partly with the political machinations in its various royal courts, but especially with Galadriel. In Clark’s commanding performance, you’ll be able to see glimpses of the character tempted by the One Ring within the film, imagining herself a queen “terrible because the dawn.”

Within the young Galadriel, determination verges on fanaticism, righteousness shades into ruthlessness. We understand how she finally ends up, in fact; welcome to the world of prequels. But “Rings of Power” could complicate her by showing that her eventual beatific wisdom won’t come so easily or nicely. As a substitute, as her brother Finrod (Will Fletcher) tells her, in an early flashback that risks corniness and survives it, “Sometimes we cannot know [light] until now we have touched the darkness.”

A troubled, obsessed, Carrie Mathison-like Galadriel might not be purely Tolkien. But she is interesting, and that’s what “Rings of Power” will have to be, greater than faithful, to sustain itself over multiple seasons. “Rings of Power” is spectacular on the screen, but spectacle will take you simply up to now in TV.

That is, in spite of everything, a tale in regards to the crafting of rings. Anyone can throw gold on the screen. It takes imagination to fashion it into something precious.