‘The Lord of the Rings: The Rings of Power,’ Season 1, Episode 5: Misty Mountain Hop 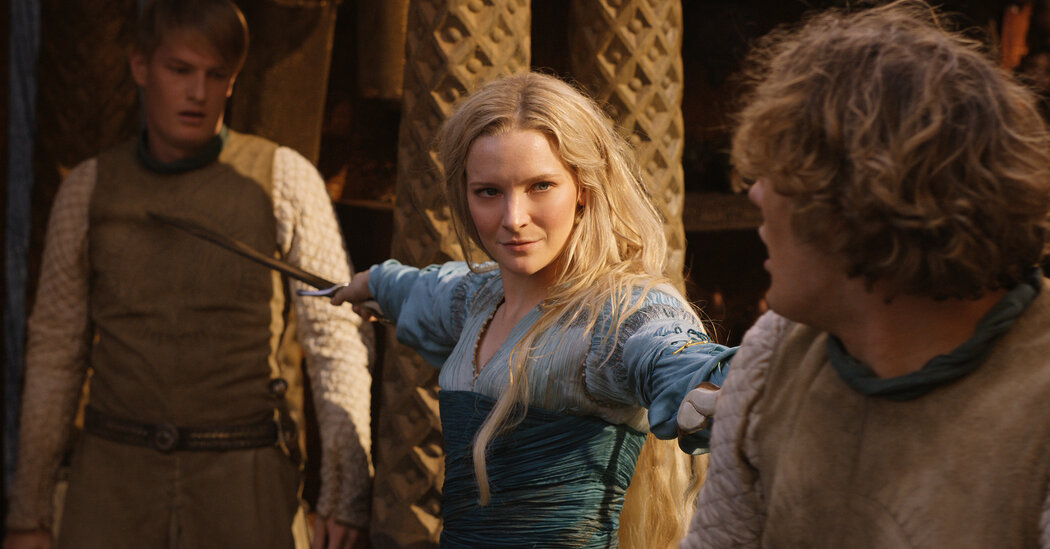 This week’s “The Rings of Power” is the grandest in scale thus far, with every major race and many of the series’s outstanding characters getting at the least some screentime. We see the Harfoots, mid-migration, on their approach to find one of the best places to burrow, to forage and “to snail while the snailing’s good.” We join the dwarf prince Durin at an uncomfortable dinner in Lindon with the elf king, Gil-galad (Benjamin Walker). We see how Adar’s offer of safety to all subservient humans tears the tower’s refugee community in two. And we follow the motion back in Númenor, where the natives make a last-ditch effort to sabotage Galadriel’s expedition to Middle-earth.

The downside to all this sprawl is that “Partings” can also be the series’s longest episode yet; and I can’t pretend the length isn’t noticeable. Earlier chapters have had the pleasurably relaxed feel of reading a book, with long stretches spent in single locations. This week feels more like a typical fantasy TV show, hopping forwards and backwards from place to put. “The Rings of Power” has an outstandingly cinematic look and sound, with its state-of-the-art digital effects, its thrilling stunts, its subtly graceful camera moves and its rousing Bear McCreary rating. However the writers have more narrative pieces to shuffle around than a typical movie does; and once they introduce so many right into a single episode, the necessity to bring each of them to a great “to be continued” point can feel workmanlike.

That said, lots happened this week that was meaningful to where this saga has been and where it goes — and quite a lot of it was plenty entertaining, as well. Listed here are some takeaways and observations from an episode teeming with memorable moments.

Once upon a time …

This episode covers a lot ground, yet still finds the time for a transient flashback to an obscure, possibly apocryphal legend, about an elven warrior who battled with one in every of Morgoth’s balrogs on the Misty Mountain, over the control of a much-coveted tree. The sequence is visually spectacular, looking like a live re-enactment of a classical painting. It’s also crucial to the general direction of the series’s plot.

The story, told by Elrond, is admittedly concerning the origin of the super-mineral often known as mithril, which the elves consider can revive their flagging spirits and keep them from having to desert Middle-earth. Elrond may also help make that occur, if he’s willing to betray an oath to a friend. But he considers oaths to be the things to which “our very souls are certain.” It’s a tricky call for our well-meaning ambassador.

The literary universe built by J.R.R. Tolkien, now adapted right into a latest series for Amazon Prime Video, has inspired generations of readers and viewers.

The humbling of the elves

Elrond does, after all, betray that oath by explaining the situation to Durin, admitting that his superiors sent him to the dwarf kingdom in the primary place to show their mithril supply. Durin, unsurprised, agrees to assist the elves, seeing this as a possible win-win: for the longer term of Middle-earth, and for the dwarves because the keepers of the ore. (He also gets off a great prank on the elves’ expense, when he pretends to be offended that their dining table is made from a fabric sacred to dwarves, with a purpose to embarrass the king and to get a free table.)

Elrond isn’t the one elf who has to grovel among the many rabble on this episode. Galadriel, to win over the humans, gives them a dynamic lesson in orc-fighting, and allows herself to take successful within the trial combat, to prove elves aren’t unstoppable. Meanwhile, within the Southlands, Arondir teaches archery to Theo, who gets him to acknowledge that elves have spent the past few centuries monitoring humankind — “counting every whisper, every kitchen knife” — and making them feel resentful. To win over the humans, the elves need to turn out to be more … well, human.

Alternatively … What if humans are bad, actually? At the beginning of the episode, Bronwyn delivers an impassioned speech to all those barricaded within the elves’ tower, saying that in the event that they stand and fight, “This tower will now not be a reminder of our frailty, but a logo of our strength.” But later, when the situation looks impossibly dire, Brownyn considers surrendering, and in despair tells Arondir, “We’re destined for the darkness. It’s how we survive. Perhaps it’s who we’re. Who we are going to all the time be.”

Certainly one of the quirkier features of J.R.R. Tolkien’s “Rings” books is that while most of his fantasy races have an innate character and purpose, the humans are inclined to be harder to pin down. On this episode, Arondir offers a proof of sorts for the Southlanders’ past alliance with evil. He describes Theo’s mysterious sword-hilt as “a key” to “enslave your ancestors,” suggesting that Morgoth ensorcelled humankind.

But Dark Lord magic doesn’t explain the deviousness of the Númenórean chancellor Pharazôn, who confesses to his skeptical son Kemen (Leon Wadham) that he is simply supporting Galadriel’s mission to Middle-earth because he believes the restoration of a human king within the Southlands will make his people more powerful and prosperous. “When all that is over, elves will take orders from us,” he says, smugly. (This nevertheless doesn’t prevent Kemen from torching one in every of the ships earmarked for the expedition — a criminal offense found by Isildur, who then saves Kemen’s life, keeps the young man’s secret, and earns his way onto one in every of Galadriel’s vessels.)

Humankind can at the least still claim Halbrand, who’s a real credit to the world of men … possibly. Though initially bitter that Galadriel used his secret royal origins as a promotional tool for her Middle-earth campaign, in the long run Halbrand agrees to affix the mission and to turn out to be a cause the Númenóreans can rally around. But before he has that change of heart, he warns Galadriel that humans are a sketchy breed, suggesting that if she knew what he needed to do to survive before he fled the Southlands, she could be appalled. She reassures to him with a line first spoken to her within the series premiere: “Sometimes to seek out the sunshine, we must first touch the darkness.”

The Harfoots and their tall Stranger have the smallest amount of airtime this week, though we do get what could possibly be a vital little bit of foreshadowing when a disgruntled Harfoot tells Sadoc he should hobble the Brandyfoots’ cart and leave them behind. I hope this doesn’t occur, for quite a lot of reasons — but primarily because I’m having fun with Lenny Henry’s performance as Sadoc, and I doubt the character would seem as much if Nori Brandyfoot were off having her own adventures.

The Harfoot scenes offer a couple of of the episode’s most memorable moments, including a conversation where Nori explains the concepts of peril and death to the Stranger, who thinks about all of the fireflies he killed and wistfully says, “I’m … peril?” Later, the Stranger proves he may indeed be peril when he saves his latest friends from an attacking pack of untamed animals but then unintentionally harms Nori through the technique of healing his wounds with some sort of ice-spell.

One last note on the Stranger: At one point on this episode we see a couple of curious-looking, white-clad, armored figures (possibly elves, but more likely the identical race as our magical sky-man) standing across the crater where he landed within the series premiere, seemingly very concerned. Which once more raises the query: Just what sort of creature is that this Stranger?

And while we’re at it: What’s the take care of Adar? We get an extended sequence with the orcs’ “father” this week, after his offer to the Southlanders drives the weaselly Waldreg to guide a splinter group of humans to Adar’s camp. Waldreg is in for a surprise though when he refers to his latest Dark Lord as “Sauron,” only to have Adar sneer at him. As a punishment, the old man has to prove his loyalty to the cause by killing one in every of the humans he brought with him.

That’s pretty grim. But who can blame Waldreg for his confusion? If Adar isn’t Sauron by another name, then who — or what — is he?