‘The Lord of the Rings: The Rings of Power’ Season 1, Episode 8: Ramble On 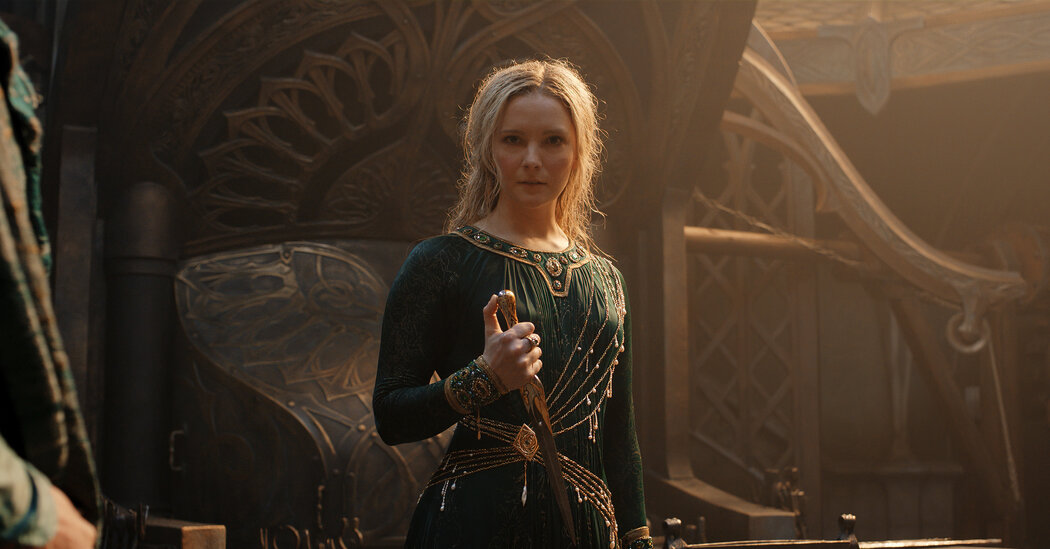 Like most prequels, “The Lord of the Rings: The Rings of Power” is headed toward a set endpoint. Irrespective of what number of recent characters and locations the writers introduce, by the point the series reaches its intended end — after five seasons, if all goes in response to plan — we can have witnessed the events that ended the Second Age of Middle-earth and led to Sauron’s all-controlling One Ring disappearing for 1000’s of years, before eventually landing in a hobbit’s pocket.

Unlike most prequels, “The Rings of Power” arrived with much of its story already extensively mapped out, via the tidbits of Middle-earth history J.R.R. Tolkien dropped in each the text of “The Lord of the Rings” novels and of their extensive appendices. For this reason fans watching this series have been paying close attention to the names they’ve never heard before, attempting to work out how they fit into the Tolkien saga. For instance: Why did the creator never mention Halbrand, the lost king of the Southlands, returned to his home by Galadriel and a contingent of Númenóreans in a failed effort to stop the orcs from establishing the shadowlands of Mordor?

This week’s Season 1 finale answers that query in shocking fashion. Halbrand is Sauron. There isn’t any lost king of the Southlands. Adar, the orc-father, has established a kingdom his former master and most hated foe will someday claim.

A part of what makes “Alloyed” a successful season finale is that in resolving the most important mystery introduced this yr — Where has Sauron gone? — it establishes a foundation for fresh conflicts in the following round of episodes. As this mercurial dark angel Sauron returns to the territory Adar has remade into Mordor, a captivating power-struggle lies ahead, rooted in ancient history and Middle-earth’s longstanding racial conflicts.

This episode also fulfills certainly one of the predominant functions of a prequel, shading in some key details from “The Lord of the Rings” back story. It is an element of Tolkien lore that Sauron helped forge the Rings of Power. How did that occur? Now we all know: In the shape of Halbrand, under the duvet of a story of woe and redemption, he charmed his way right into a fateful moment that might shape Middle-earth’s destiny for over a thousand years. The ironies are wealthy; and the ramifications are only starting.

The literary universe built by J.R.R. Tolkien, now adapted right into a recent series for Amazon Prime Video, has inspired generations of readers and viewers.

Listed below are five other takeaways and observations from this episode — and from the season as a complete:

Before the large Halbrand-as-Sauron reveal, this episode teases the chance that the Stranger is Sauron, because the mysterious white-clad mystics finally track him down after which surprisingly bend their knees, vowing to serve their Dark Lord. All of this happens before the opening credits, in a clever little bit of narrative misdirection, intended to maintain the audience from catching on too quickly that Halbrand is our Big Bad.

There may be, because it happens, essential recent information concerning the Stranger this week, though it’s something way more expected: He’s, we learn, certainly one of the Istari, or “sensible ones,” or wizards. We still don’t have a reputation yet for this big fella, but by the top of the episode — after a tense skirmish between the Harfoots and the mystics that sees Sadoc sacrificing his life and the Stranger having access to a strong magic staff — he does finally start speaking in full sentences.

The Harfoots story line ends with a promising setup for Season 2: Nori will proceed to travel with the Stranger as he sets off toward the land of Rhûn to learn more about who he’s. He welcomes her company, because traveling alone is only a journey, but traveling with friends is an adventure. And as Tolkien fans know, adventures are more fun.

Earlier this season, while trying to influence Míriel to affix her cause, Galadriel expressed sympathy with the Queen-Regent and her burdensome responsibilities, saying, “I know the way it feels to be the just one who sees.” Yet certainly one of this show’s more powerful themes has been the concept heroes can follow a path of logic and honor with absolute certainty, and still arrive on the fallacious conclusion — or worse, can bring into existence the very thing they were trying to stop.

In Galadriel’s case, her need to make use of Halbrand as a logo — to encourage her Númenórean army — results in her bring her sworn enemy Sauron into Eregion, where he then coaxes Celebrimbor into amplifying Elrond’s minuscule supply of mithril by utilizing it to create an alloy, in the shape of a crown. Halbrand’s sudden eagerness to create something that can provide “power over flesh” makes Galadriel suspicious, so she has an archivist check the genealogies of the Southlands, which reveals that the region’s last king died centuries ago and left no heir. Not only has she been duped, but she has given Sauron access to a force that would tilt the balance of power in Middle-earth without end.

Does the Halbrand reveal make sense, within the context of the season as a complete? I can consider some moments from earlier episodes — like Halbrand hesitating over whether to simply accept the mantle of king — that won’t fit so neatly with what we now know to be Sauron’s grand designs. (However, Númenor is clearly hugely essential to Sauron’s plans as well, so he could have just desired to stay there moderately than heading back to the mainland so soon.)

Ultimately, this big twist works since it is a pivotal a part of Galadriel’s character arc. In a moving sequence after the reveal, Sauron enters the elf’s mind, and corrupts her blissful memories of her brother, meaning to persuade her that they’ve all had the identical goal all along: a stable and peaceful Middle-earth. Back in Númenor, Halbrand tried to tutor Galadriel within the ways of persuasion by saying she should discover what people fear, after which give them the means to master it. He does that along with her here by proposing they rule together — just as he “helps” her fellow elves forge a tool of control.

After Galadriel rejects Sauron and flees Eregion, the elves resolve to make three rings moderately than one crown. But the method that can result in the following great war has begun. And the one who saw it coming is essentially responsible.

The opposite major story line within the finale involves Miriel’s return to Númenor, where she learns that her father has died — though not until he has first shown Elendil’s daughter Eärien find his palantir, and has urged her to assist lead the dominion back to its “old ways.” Númenor has been a terrific location on this series, and before Elendil and Miriel left, we were teased with quite a lot of as-yet-unrevealed history and courtly intrigue that needs to be fruitful to explore in Season 2.

Still, perhaps due to all the large revelations elsewhere within the episode, the motion on the island on this finale was fairly forgettable. Considered one of the issues of this primary “Rings of Power” season is that some key characters haven’t been developed enough to grab the audience’s attention. I might say that’s especially been a difficulty with Elendil and his children. I even have barely mentioned Eärien in these reviews, because she has rarely been doing anything noteworthy. Isildur has been a much bigger think about the plot, but given how essential he’s to the “Rings” saga as a complete, he too has yet to face out from the sprawling solid.

Perhaps Season 2 will handle that higher. Speaking of which …

What could “The Rings of Power” improve on within the seasons to return? Considered one of the show’s biggest weaknesses is one shared by quite a lot of prestige TV dramas: The episodes are too long, and too repetitive. Partly that springs from the source material. A correct Tolkien experience needs to be somewhat leisurely, where the conversations and the adventures on the road matter as much as the large battles at the ultimate destinations. But in addition: This series is handsome-looking and features excellent actors delivering well-crafted dialogue. Sometimes it’s hard for creators with those sorts of resources at their disposal to make use of less of it.

They need to, though. Too often this season, episodes spent two or three scenes covering the identical narrative and thematic ground — or had single scenes drag on until losing their oomph. (See: Nori’s goodbye to her family on this finale, which could be very sweet at first after which just … keeps going.) A brisker pace could tip this show from good to great.

The road goes ever on.

All of that said, what stands out most to me from this primary season is how way more impressive every part has been than I had expected. The sets, the consequences, the language and even the small moments of singing and humor are all clearly crafted with so much love — and paid for with quite a lot of money.

“The Rings of Power” has offered spectacle and scope beyond what any current television series is attempting. Yet the creators also showed a robust command of that flash and grandeur, using it to border a great story. This show is hardly perfect, but for probably the most part it’s what it must be: the TV equivalent of a page-turner fantasy novel, for fans to wander away in.