The Many Violations of the Violent Birth Scene 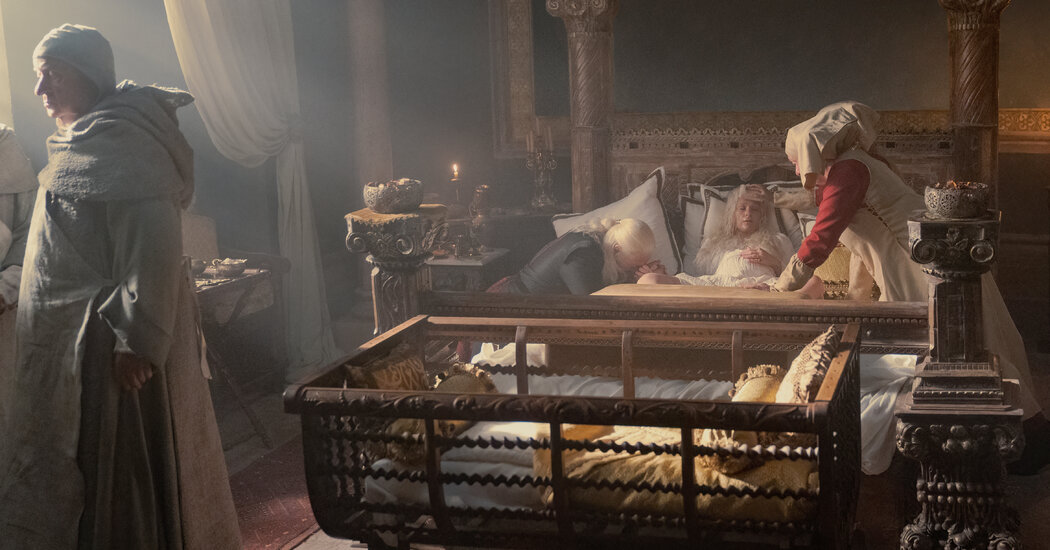 “Are you sure you wish to watch this?” my husband asked as we cued up the “House of the Dragon” premiere last week.

We had each seen the web warnings that the “Game of Thrones” prequel kicked off with a “grisly,” “brutal” and “gory medieval C-section.” I had undergone a cesarean section a few years ago, throughout the birth of my son, and now I used to be again pregnant and preparing for the opportunity of a second surgery. But yes, I used to be sure I wanted to look at it.

I used to be, I assume, inquisitive about what probably the most horrific interpretation of the procedure might appear to be. I’m still eager about the scene — not since it is so violent, but because its violence is framed as so profound. Like so many depictions of pregnancy, its visceral and emotional possibilities are largely obscured by a tangle of clichés posturing as insight.

King’s Landing, in any case, will not be a subtle place. At the highest of the episode, an uncomfortably pregnant Queen Aemma foreshadows her fate: “The childbed is our battlefield,” she tells her daughter, Princess Rhaenyra. “We must learn to face it with a stiff lip.” Meanwhile, her husband, King Viserys, is ominously confident that this pregnancy, after a run of miscarriages and stillbirths, will finally produce a male heir.

As a substitute, the queen’s labor reaches a dangerous impasse. The grand maester informs the king that the infant is in a breech position, and that “it sometimes becomes vital for the daddy to make an unimaginable alternative” — to “sacrifice one or to lose them each.” Viserys approves the surgical removal of the infant without Aemma’s knowledge or consent. As birth attendants restrain their desperate, confused queen, the grand maester slices into her belly. The queen dies, and her baby dies soon after.

What’s the meaning of this gruesome spectacle? George R.R. Martin’s “Fire & Blood,” the book on which “House of the Dragon” relies, has the queen die in childbirth in an unspecified manner; only within the show does it turn into a murder by means of a rogue belly slicing. In a series of interviews, Miguel Sapochnik, one among the showrunners and the episode’s director, exhaustively explained the resonance of the alternative. The scene — intercut with a bloody jousting tournament mounted by the king in premature celebration — was designed to be “a distillation of the experience of men and the experience of ladies” in Westeros, Sapochnik said. Nevertheless it was also meant to disclose “parallels to our own past and present,” he added. It represents the grimness of childbirth within the medieval era, from which Martin’s fantasy world draws, when “giving birth was violence”; however it also represents the grimness of childbirth in post-Roe America, when the scene reads as “more timely and impactful than ever.”

“Anxious to not get it flawed,” eager “to not shrink back” but in addition “to not sensationalize,” the creative team — the episode was written, directed and edited by men — enlisted two midwives to advise on set and innumerable women to screen the sequence before it aired. The scene, Sapochnik promised, was only the start of a complete season of portentous births, each seeded with additional gender commentary. The theme of this birth, he explained, was “torture.”

The sheer violence of the scene didn’t shock me. (Earlier within the episode, a personality slices off a person’s penis and tosses it atop a pushcart piled with various severed appendages — violent spectacle is a significant element of the show.) However the implied profundity of the violence struck me as faintly ridiculous. The loading of meaning onto the queen’s death felt like an try to sidestep the criticism that dogged “Game of Thrones” — that it indulged in senseless violence against women. However the imposition of sense on such violence may feel unsatisfying, as the feminine character’s interiority is subsumed into the creators’ effort to make a press release.

The scene creaks under the load of so many signifiers. The queen is shot from seemingly every angle; no perspective on her pregnant body goes unseen. We see her moaning within the background, tangled in bedclothes. We zoom close on her delirious face in gauzy light, evoking the softness of a maternity shoot. Often we see her from above, as if we’re peering down on her in a surgical theater. Or we spy her from beyond her rounded stomach, as if we’re attendants assisting within the delivery. We glance down upon her as she is cut open, drained of blood and full of reaching hands.

Because the scene wears on, the camera itself seems moved by cowardice. It retreats further and farther from the queen’s perspective, assuming a distant and clinical gaze. Often it looks away entirely, focusing as an alternative on the cartoonish gore of the jousting,which involves stand in for the violence of the birth. The queen’s screams are silenced, overlaid with the sounds of a roaring tournament crowd and the outlandish squishing of skulls and brains. In its desperation for meaning, the scene does turn into senseless.

Being pregnant can feel like passing from the physical world into the world of signs. Pregnancy is weighted with a lot metaphorical significance that it’s even a metaphor for significance — pregnant with meaning. But I’m not pregnant with meaning; I’m just pregnant. And so I watch depictions of pregnancy and birth from my very own removed position, curious what my experience signifies to other people, and what it’s imagined to say about our culture and politics.

The “House of the Dragon” C-section is neither historically accurate (the mother’s life was valued over that of the fetus in much medieval teaching, as Rebecca Onion detailed in Slate) nor particularly of the moment (post-Roe, many ladies are begging doctors for surgical interventions of their pregnancies). Nevertheless it does access a persistent cliché: The C-section is a birth alternative loaded with stigma, as Leslie Jamison noted in an essay on the procedure last yr. It’s coded as “each miraculous and suspect, concurrently a deus ex machina and a tyrannical intervention” — the antithesis of a “natural birth.”

This construction voids the mother’s role in childbirth, ceding it to a patriarchal medical establishment. The riddle from “Macbeth” — which posits that because Macduff was “premature ripped” from his mother’s womb, he will not be “of woman born” — persists. On-screen pregnancies still rarely end in C-sections. After they do, they’re the stuff of horror. Because the film critic Violet LeVoit has argued, the vaginal birth is framed because the climactic final struggle of the hero’s pregnancy journey. A C-section, then, renders our hero a victim — and a failure.

None of this coincides with my very own experience. I didn’t feel bad for having a C-section, or feel that I didn’t truly “give birth” to my son; I felt that my doctors and I did what was medically vital to deliver him safely. And yet I feel nagged by this imposed narrative, and I’m reminded of it every time I see a birth scene shot from above, because the “House of the Dragon” one often is.

Birth was, for me, an overwhelmingly sensory experience, not a visible one. During labor, I couldn’t see past my very own abdomen. My strongest memory of the surgery, which the hospital shielded from my view with a raised blue tarp, is of the uncanny release of pressure in my anesthetized body when the infant was removed. Because it was happening, a health care provider asked if I wanted her to photograph the moment, and I impulsively agreed, pondering that I could at all times delete the image if I couldn’t stomach it. After I have a look at the photo now, I recognize my son’s features emerging from the bloodied edges of my body, but I don’t recognize the perspective. It’s as if I’m reliving one other person’s memory, not my very own.

So no, the depiction of violence in birth doesn’t hassle me. However the bird’s-eye view of it does. The camera’s insistence on its lofty perspective, on looking down on the birthing woman’s full body from a spectator’s remove — that strikes me as the actual violation. In those jarring shots, the depiction of male violence becomes indistinguishable from the male gaze.

Perhaps future “House of the Dragon” births will resonate with my very own feelings about childbirth. And I’m sure other parents, bringing their very own experiences to the episode, left it with different interpretations. But that’s the difficulty with attempting to distill the whole “experience of ladies” right into a scene — the thought is absurd, even in a fantasy world.