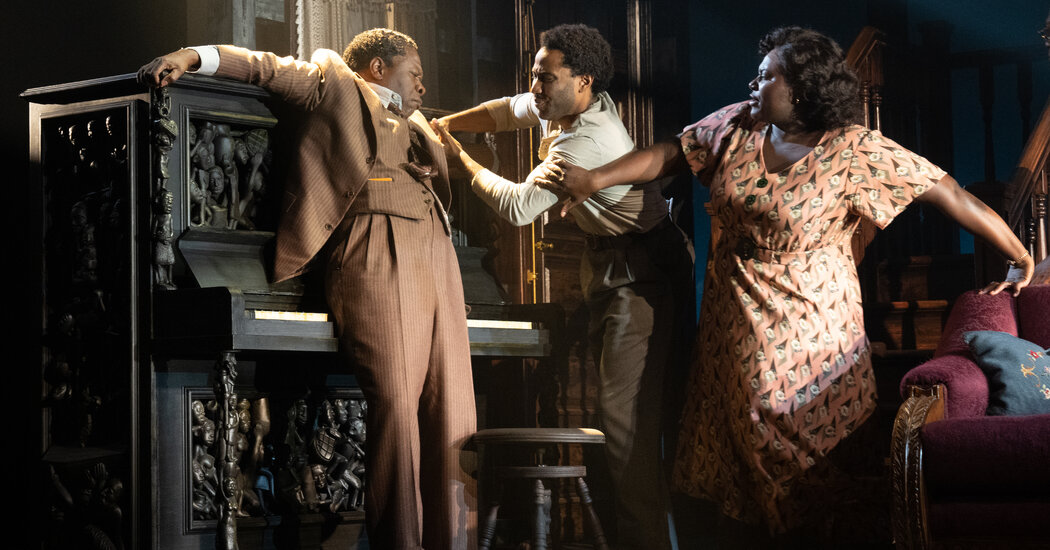 4 Black men gathered around a kitchen table exuberantly sing a piece song (“If you marry, don’t marry no farming man, hoh-ah,” they holler, clapping and stomping their feet), a Black woman girds herself along with her grief for the husband and father she lost to the anger of white men, and siblings fight over a seemingly haunted family heirloom that tells a story of generational trauma and loss. These circumstances are good enough to lift the dead.

Or no less than they’re within the Charles household, within the Broadway revival of August Wilson’s “The Piano Lesson,” which opened Thursday on the Ethel Barrymore Theater.

First staged in 1987 on the Yale Repertory Theater, “The Piano Lesson” made its Broadway debut on the Walter Kerr three years later. That 12 months it won the Pulitzer Prize for Drama — considered one of two Wilson won for his American Century Cycle, a group of 10 plays, one for every decade of the twentieth century, depicting African American life.

In “The Piano Lesson,” it’s Pittsburgh, 1936, in the home of Doaker Charles (Samuel L. Jackson), an old railroad employee who’s now a train cook. His niece, Berniece (Danielle Brooks), and her 11-year-old daughter, Maretha (played by Jurnee Swan on the performance I saw), live with him in what’s, in Beowulf Boritt’s too on-the-nose scenic design, a skeletal facsimile of a house — just beams and planks, a few of which don’t even connect. Though there’s not much to the home — a love seat, a tiny kitchen with an ice box — there may be an ornately carved piano that commands attention, despite its place within the far corner of the lounge.

It’s an august instrument with a knotty history, linking the Charles family to their enslaved ancestors and the white family that owned them. Each panel is roofed with figures representing the Charleses; even the piano’s front legs are elaborately sculpted.

Berniece’s brother, Boy Willie (John David Washington), has traveled up north from Mississippi along with his friend Lymon (Ray Fisher) planning to money it in for a plot of land and in the method hoping to rework an artifact of their family’s past struggles right into a path to a greater future. But Berniece refuses to present up the piano and all of the bloody history it represents. To complicate matters, the piano is haunted by a recently dead member of the white family that after owned generations of the Charleses.

Wilson’s usual signatures are here, including the somber subject material related to Black disenfranchisement, prejudice, history and trauma — paired with witty, casual dialogue and flights into the surreal. Wilson makes poetry out of the mundane minutiae of day by day African American life without forgetting how the past is present, alive and immediate just like the melody of a song played by a piano that seems to have sprung to life.

And yet even amongst Wilson’s outstanding and infrequently surreal plays, “The Piano Lesson,” each a family drama and a ghost story, stands out as considered one of the odder works. It’s a combination of themes and tones, each concrete and ethereal, ghoulish and comedic, however the imbalanced direction here, by LaTanya Richardson Jackson, overemphasizes the horror too literally; it really works best on a metaphorical level.

The performances are, in almost every case, engaging. Michael Potts, the veteran stage and screen actor who has appeared in other Wilson works, including the 2017 Broadway revival of “Jitney” and the 2020 film adaptation of “Ma Rainey’s Black Bottom,” is perfection as Doaker’s brother Wining Boy, an itinerant musician who can never appear to hold onto a dollar.

Because the surviving Charles brothers, Potts and Jackson (who played Boy Willie in the unique 1987 production) have a breezy rapport: They joke, drink and reminisce like a few cads retired from most — but not all — of their wayward ways. Wining Boy stays a smooth scammer, and Doaker is an even-tempered dispenser of wisdom. Trai Byers, as Avery, a recent reverend who’s enamored with Berniece, takes on his character’s highfalutin sermonizing with comedic aloofness, and April Matthis makes a transient, though memorable, appearance as a minor character with some big-city attitude. Because the simpleton Lymon, Fisher occasionally goes too hokey, especially on the subject of his Southern drawl, but is endearing nonetheless along with his dopey physicality and witless expressions.

Fisher is an excellent contrast to Washington’s downright feverish performance as Boy Willie. He speaks in a hot spitfire of stubborn refusals, denials and lofty aspirations, convinced that he can put a price tag on his family’s past and use the cash to construct a future where he is the same as the white men who owned his ancestors and still hold power over him and his family.

Washington, in a revelatory stage debut, is a blaze of energy lighting every scene he’s in. Brooks, who was a enjoyment of “The Color Purple” and “Much Ado About Nothing,” in addition to in her TV roles in “Orange is the Recent Black” and “Peacemaker,” isn’t as radiant a presence as in her other outings. Though she has just a few standout moments, she, like her character, too often fades into the background, overshadowed by the extensive history and myths within the play.

Despite Wilson’s eloquent writing, “The Piano Lesson,” at nearly three hours, drags on. The repetitive dialogue, especially within the second act, evokes a nagging sensation of déjà vu. The spooky shifts in lighting (by Japhy Weideman) and Boritt’s broken home, like a metaphor delivered to life, leave nothing to the imagination.

While on this production the play’s supernatural elements come across like anomalies, on the page they aren’t; the characters aren’t all that shocked by the eerie, odd occurrences and in actual fact proceed on with their lives as usual. What haunts the Charles household is what haunts Black America every single day — the living history of racial violence and pervasive inequality. A part of what’s missing on this mostly entertaining but often underwhelming “Piano Lesson” is the sense that this can be a reality we’ve lived ourselves. Who hasn’t heard the melody of a ghost’s song in the course of the night?