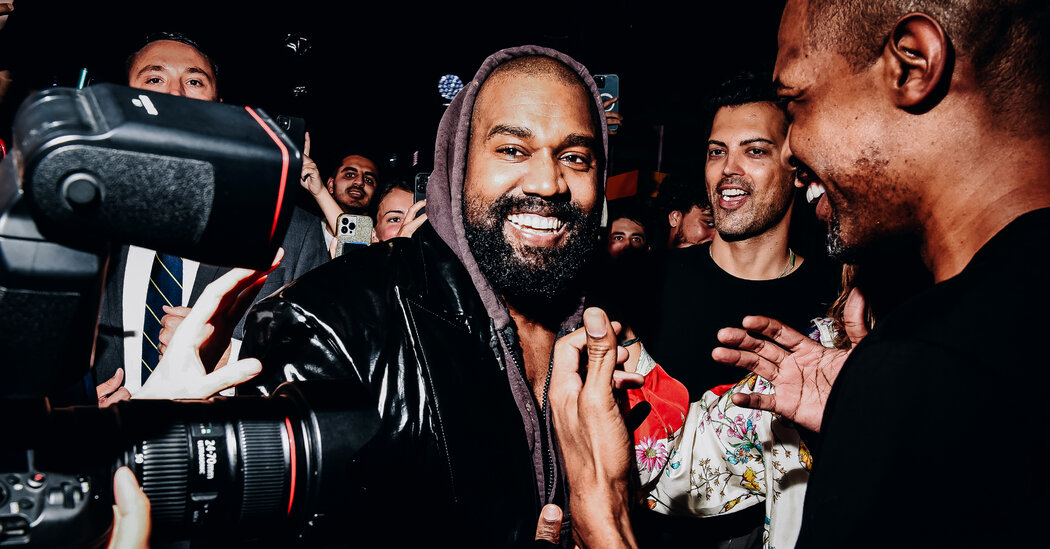 PARIS — Yeezy is dead. Long live YZY. Stage three of the ambitions of Ye — the artist formerly often known as Kanye West — to decorate the world has begun.

Presumably that was speculated to be the takeaway from the surprise show of Paris Fashion Week, held off-schedule in an empty office tower just down the road from the Arc de Triomphe.

Though it turned out to be only nominally a fashion show and more like “The YZY Experience”: a chaotic mess of self-justification, confessional, bone-picking and messianic ambition, with a “White Lives Matter” shot of shock and provocation that overshadowed the garments on the runway.

The rumors began through the weekend, only a day or so before the Balenciaga mud show. Ye was in Paris and was going to stage a fashion show — just a little greater than two weeks after ending his much-ballyhooed partnership with Gap.

Possibly it will occur Monday? Possibly not; Ye had just fired his PR agency. No wait, it was happening; he had found one other agency. Then, Sunday night, a digital invite arrived. For the subsequent evening. Guests were asked to not share the address.

Monday at 5:45 p.m., the Avenue de la Grande Armée was heaving with screaming fans and photographers. A lot for secrecy. They outnumbered the show’s actual attendees by what gave the look of 100 to at least one.

Still, Anna Wintour got here. So did John Galliano. Demna, the Balenciaga designer, and Cédric Charbit, its chief executive. Alexandre Arnault, the chief marketing officer of Tiffany & Company and a son of the LVMH chieftain Bernard Arnault. Then all of them sat, fiddling with the soap-on-rope that looked like three granite blocks and had been left on every seat, waiting an hour and a half for the show to start. (Well, OK, Anna and John left before the entire thing ended, but that was because they’d one other appointment, Ms. Wintour said.)

It was nearly as good a mirrored image as anything this week of just how the culture and power structure of fashion and entertainment has modified up to now decade. Since it was 11 years ago, in early October 2011, that Ye held his first fashion show in Paris.

The road at the moment was called “Kanye West.” Heavy on the luxurious frills — leather and fur and gold hardware — it was widely dismissed by its audience. But this time there they were, the powers that be of the industry, jumping on the last minute to see what Ye needed to deliver.

Which involved a live choir featuring a bunch of youngsters from Ye’s latest Donda Academy in California in addition to his daughter, North, and commenced together with his rambling speech about critics who complained about his shows being late; his former manager, Scooter Braun; his hospitalization (Ye has been diagnosed with bipolar disorder); the pain of being called “crazy”; critics who complained that his clothes won’t be well made; the people at Gap who didn’t get his vision; Bernard Arnault, whom he called “his latest Drake”; and the news that he was establishing one more version of his own fashion house and it began now.

Because “we modified the look of fashion during the last 10 years. We’re the streets. We’re the culture.” And in terms of the culture, “I’m Ye, and everybody knows I’m the leader.”

Except this leader was wearing an oversize shirt with a photograph of Pope John Paul II and the words “Seguiremos tu ejemplo” (“We are going to follow your example”) on the front, and “White Lives Matter” on the back — a phrase that the Anti-Defamation League has called hate speech and attributed to white supremacists (including the Ku Klux Klan), who began using it in 2015 in response to the Black Lives Matter movement.

The shirt was not possible to miss because, as he spoke, Ye’s image was projected behind him on a wall 4 stories high.

Besides, Candace Owens, the conservative commentator, was within the audience and wearing one, too. Later the shirt appeared as a part of the gathering, modeled by Selah Marley, the daughter of Lauryn Hill and granddaughter of Bob Marley. (Matthew M. Williams, the Givenchy designer who worked with Mr. West earlier in his profession; Michéle Lamy, Rick Owen’s wife; and Naomi Campbell also walked within the show.)

It was the one message garment in the road, which was called SZN9 in reference to the Yeezy shows that had come before, created along with Shayne Oliver, the previous designer of Hood By Air (Ye is nothing if not a terrific spotter and cultivator of talent). Which made it stand out much more in a show otherwise focused on garments that would simply be pulled onto the body, with no hardware — buttons or zips or snaps — involved, an concept that Ye first began talking about within the context of his work with Gap.

Because it happened, a number of this line looked like that line, especially that a part of that line engineered with Balenciaga’s Demna, including the full-body catsuits that opened the show, the duvet-like puffer ponchos, the blouson jackets and sweats that made the torso right into a kind of steroid-filled G.I. Joe triangle, the dearth of seams and the semi-apocalyptic palette.

It has potential, however the import got swamped by the shirt, what it symbolized, and the way its endorsement by a figure similar to Ye — even one with a track record of wearing MAGA hats and toying with Confederate imagery — might be used as a rallying cry by those that already buy into its message.

The subsequent day, on the Chanel show, Edward Enninful, the editor of British Vogue and essentially the most powerful Black man in fashion media, called the shirt “inappropriate” and “insensitive, given the state of the world.”

Ms. Nylander had posted, “It doesn’t matter what the intention was … it’s perception to the masses out of context.”

Indeed, ultimately, it’s the shirt out of context that made the news: not Ye’s theories about dress, or his allegations that Mr. Arnault promised to set him up in his own house after which reneged and now has turn out to be Ye’s biggest competition (an LVMH representative said Mr. Arnault had “no comment”); not even Ye’s assertion that, having disrupted the style week highlight, he still felt “at war.” In that case, this was a grenade that backfired.

As to why he did it, backstage Ye declined to offer any theoretical framework. “It says all of it,” he said, of the shirt. But what exactly does it say?

That he truly believes he can appropriate the language of racial violence with irony? That someday the ability structure of Black and white shall be reversed, and since he says this collection is the long run, that’s the world he envisions? That Ye gets a kick out of pushing everyone’s buttons? That he desires to see how far he can go and doesn’t really care about, or take into consideration, the collateral damage within the meantime (including to those children singing at his feet), despite the violence this might feed?

Or that, as he said in his speech, “You’ll be able to’t manage me. That is an unmanageable situation.”