These Veterans Began Businesses Inspired by Their Deployments 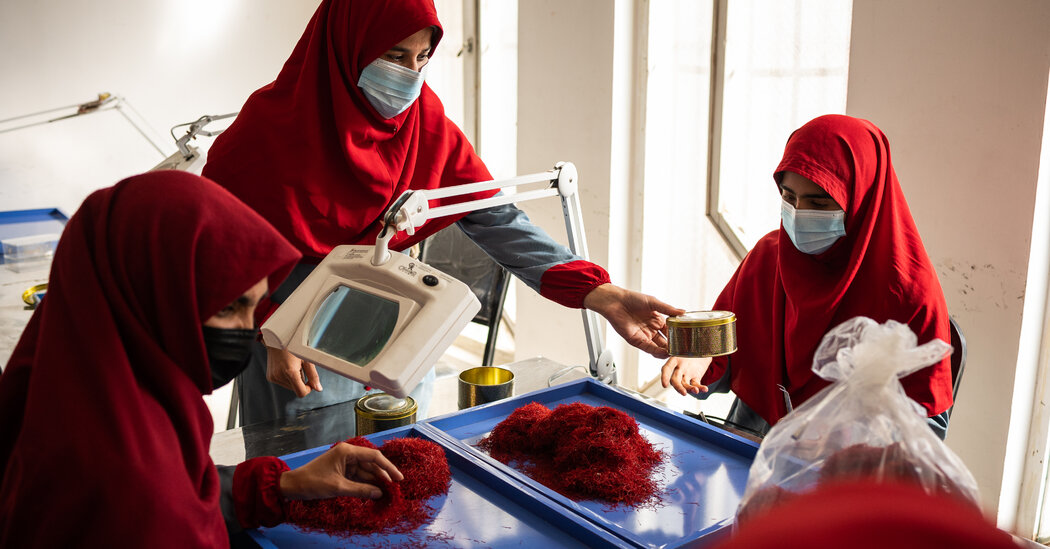 Over twenty years of war, American service members overseas looked across the rubble, the destroyed fields and the ripped-up homes and saw possibilities.

One tasted tea for the primary time during his deployment; one other was taken by flip-flops fashioned from combat boots. Female soldiers got to know women in Afghanistan and imagined economically empowered lives for them. An Army helicopter pilot got here back sick from exposure to burning plastics and shifted his views on the environment.

Many veterans have struck out on their very own, availing themselves of small business programs to construct firms inspired by their combat experiences and calibrated to handle social or economic issues within the countries where they served.

Nick Kesler, a veteran advocate who once ran a nonprofit consulting firm dedicated to supporting these types of deployment-inspired businesses, said the veterans behind them “know the true cost of instability and conflict on the families they aim to support.”

“These businesses create a connection for them between their life in uniform overseas and now their civilian lives back home,” he said.

Below are the stories of 4 such businesses.

While growing up in Louisiana, Brandon Friedman had only tried tea in iced form and thought it was “the grossest thing ever.”

“My idea of tea was British ladies with big hats,” he recalled.

His first true tea sipping was in Iraq with Kurdish fighters wearing AK-47 bandoleers. It was one in all many eye-opening moments for him during deployments to Iraq, Pakistan and Afghanistan.

Outside of the taste, tea drinking in Iraq represented “stopping and slowing down,” Mr. Friedman said. “It was a option to remove yourself from on a regular basis life.”

Back home in Dallas in 2004, he found himself rummaging through halal grocery stores for brown bags of loose tea. Life moved on, with marriage, graduate school, a baby, a job in politics. “I left the war and left the tea previously.”

In 2016, Mr. Friedman began to research the origins of the tea he enjoyed. (The black Ceylon tea he had in Iraq got here from Sri Lanka and other nations.) He soon began exploring how he might import tea from former conflict zones. His tea education began in earnest, as he learned concerning the aroma and mouth feel of every type.

Working with a nonprofit and searching for money on Kickstarter, he and an Army buddy — a former Green Beret — launched Rakkasan Tea Company in 2017 in a 250-square-foot office space at the back of a small constructing, importing from Nepal, Colombia, Vietnam and other countries whose teas might be hard to search out in American stores. They now have a 2,000-square-foot facility with a storefront, and ship 45 teas from nine countries.

There have been challenges. In Vietnam, for instance, the 300- and 400-year-old wild tea trees that grow within the mountains and forests within the northern provinces of Ha Giang and Yen Bai are difficult to administer.

Some suppliers “are way more casual about timelines,” he said, and were hard to press to satisfy holiday sales schedules. The most important issues arise, nonetheless, when post-conflict nations like Myanmar and Ethiopia “turn back into current-conflict countries.” On top of all that, after all, got here the supply-chain challenges brought on by the pandemic.

Selling tea has change into an extension of his military mission, said Mr. Friedman, who still favors the Ceylon tea he first sipped in Iraq. “I remain convinced that the way in which out of conflict is thru people talking to one another, and commerce,” he said. “We call this peace through trade.”

Emily Miller recalls first deploying with the Army in Afghanistan over a decade ago, when the U.S. military was finally realizing how culturally inappropriate it was to have male service members tramping through villages and talking to women and kids. In 2011, she joined a team tasked with engaging “the opposite 50 percent of the population that has been just about largely ignored.”

She ended her two deployments “pretty disillusioned with the war effort and the way we weren’t making the difference.” She believed that business may very well be a simpler force for good. Soon, Ms. Miller was at Harvard Business School and on a Skype call with a classmate, Kim Jung, and a 3rd friend, Keith Alaniz. Everyone on the decision was an Army veteran who had cycled through Afghanistan.

Mr. Alaniz told his friends about his second tour within the Maidan Wardak Province, and meeting Hajji Joseph, a saffron farmer who was desperate to tap into the U.S. marketplace.

The three friends began mulling saffron together. They wondered in the event that they could connect farmers with restaurants in the US. They talked about starting a business that would improve economic conditions in rural Afghanistan in the method.

A visit in 2014 to Afghanistan, where the three met with farmers, sealed their plan to create Rumi Spice, Ms. Jung said. (They later added Carol Wang, a civilian who spoke Dari, to the combo.)

“When the saffron got here into the room,” Ms. Jung recalled of their visit, “it just filled the room with this amazing fragrance that I believed any chef would just swoon over.” But it surely got here in a cardboard box wrapped in string, presaging years of labor to show U.S. standards of packaging and food safety to local students and farmers, and to centralize processing within the region, which had never been done.

Rumi Spice has since trained nearly 4,000 local women to work in its processing and success centers, a few of them receiving a salary for his or her labor for the primary time.

The team was careful to not align themselves with the Americans or the Afghan government they backed, which proved prescient.

Even after the disintegration of the country’s government last yr, Rumi Spice — now with 12 products in 1,800 stores across the US — continues to employ 1000’s of ladies and farmers.

During his deployments in Iraq, Chris Videau couldn’t help but notice all of the trash. There have been piles of it in every single place, and a black haze of pollution darkened the skies. The stench of burning plastic hung below.

The military’s burn pits — giant garbage dumps ignited by jet fuel — glowed so intensely that Mr. Videau, an Army helicopter pilot, could navigate by their light.

Mr. Videau was amongst tens of 1000’s of people that were exposed to burn pits while serving in Iraq and Afghanistan. Many have since filed disability compensation claims with the Department of Veterans Affairs. Congress has also taken up their cause.

Mr. Videau thought he had left the burning waste, like so many parts of his deployment, behind him when he returned to Kansas in 2007. But by 2008, his morning runs began to suffer. A physician who examined his X-rays told him his lungs “were like a 70-year-old’s” although he was in his early 30s.

“I began fascinated by plastic,” Mr. Videau said, and shortly he and his wife began to remove it from their home as much as possible. “That modified my outlook on life.”

But he still couldn’t avoid plastic laundry detergent tubs. In 2017, he began researching whether laundry sheets could replace standard soap. After some complex negotiations with an organization that held a patent for such sheets, Mr. Videau and a partner began their business. They quickly sold 25,000 boxes of soap sheets.

Since its first yr, Mr. Videau said, Sheets Laundry Club has had over $9 million in total sales and prevented greater than 615,000 plastic containers from being sold.

“The intent wasn’t to create awareness for burn pits,” he said. “It was to create a sustainable business for my family. We consider if we do the suitable thing, the cash will come.”

Mr. Videau’s journey has come full circle, as he now makes some extent to donate his products to troops overseas.

“I actually have been over there,” he said. “I do know what it’s prefer to not get things within the mail.”

Matthew Griffin was a 4th-generation military man and West Point graduate thrust into the war immediately after the Sept. 11, 2001, attacks. “I grew up on ‘Rambo’ and thought the perfect option to serve my country was to be an Army Ranger,” he said.

After leaving as a captain in 2006, Mr. Griffin found his way into the contracting world, and in 2008 was back in Afghanistan helping to establish medical clinics.

In the future he visited a combat boot factory in Kabul, where he was impressed to see staff making a boot that emulated a flip-flop sandal. It seemed that many Afghan fighters, used to unlaced shoes, were “losing tens of 1000’s of man-hours a day,” scuffling with the extensive laces on their combat boots.

The factory owner had invented military sandals “that adhered to their cultural norms,” Mr. Griffin said. When the owner told him he had no plans for the factory after the war, Mr. Griffin ventured to show the business into something viable and enduring, benefiting the country where he once fought.

He called one other Ranger buddy, Donald Lee, and the 2 pondered the right way to get Afghan footwear into the American marketplace. They began making flip-flops within the country in 2012 and “immediately failed,” he said. They eventually shifted production to Colombia, benefiting from bilateral trade agreements with the US, and started selling Combat Flip Flops online in 2013.

“Once we first began, our customers were 80 percent military and military families,” Mr. Griffin said.

Their customer base grew and diversified as they added scarves, bags and jewellery made in Afghanistan, Laos and the US. After the Taliban regained control over Afghanistan last yr, Combat Flip Flops pivoted its Afghan textile factory to make blankets and cold-weather clothing for displaced Afghans suffering through a brutal winter. Some proceeds from sales have gone toward funding girls’ education in Afghanistan, land mine removal in Laos and services for disabled veterans in Washington State. “It’s been a fairly wild ride,” Mr. Griffin said.