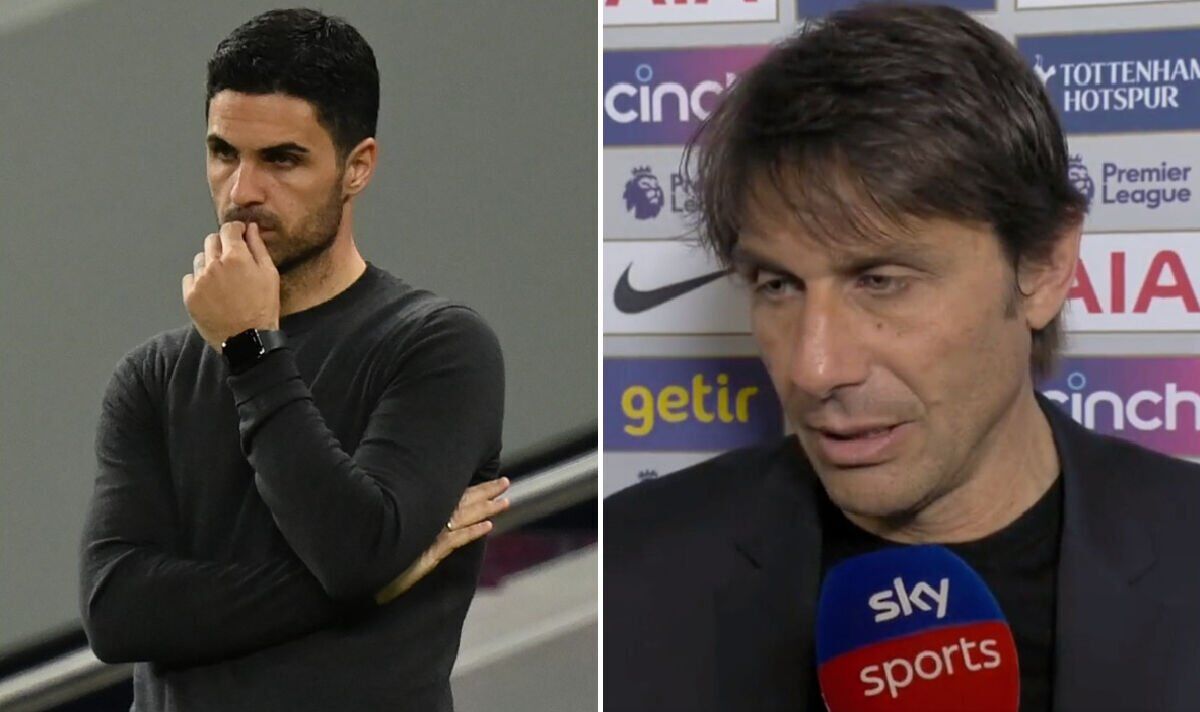 Tottenham manager Antonio Conte hit out at Arsenal rival Mikel Arteta in brutal fashion after the north London derby on Thursday night as he claimed: “He complains so much.” Spurs hammered the Gunners 3-0 after Rob Holding had been sent off while the visitors trailed by one goal. But Arteta was furious post-match and claimed that he couldn’t express his feelings or he would face punishment from the FA.

But Conte issued a savage response to Arteta’s complaints and insisted the Arsenal manager must concentrate on his job and complain less. The Spaniard had hinted he was unhappy with referee Paul Tierney’s performance, with the match official giving Spurs a penalty to make it 1-0 through Harry Kane after which sending off Holding for a second yellow after he elbowed Son Heung-min.

And Conte said of Arteta in stinging style his post-match press conference: “He complains so much. He has to focus more on his team. He needs to be calm and focus more on his work. Mikel Arteta is a extremely good coach. He has just began to do that job and I hearken to him complain so much. To listen to someone complain on a regular basis shouldn’t be so good. He needs to be calm and take a look at to proceed to work.

“At Liverpool do you hear me complain about Fabinho and all of the fouls? No. He can take my advice if he wants, but when not I do not care. He complained in regards to the fixtures and that was after Arsenal had an unbelievable postponement with only one Covid case. Now we’re playing at 12pm on Sunday they usually don’t play until Monday. We will not all the time complain.”

Arteta had earlier told the Sky Sports cameras: “If I say what I believe I’m suspended six months. I’m allowed to provide my interpretation of what I believed, but I don’t wish to lie. I cannot say what I believe, I will likely be suspended. I’m so happy with my players. Ask the referee to return here and explain his decisions.

“That is his decision. Such an attractive game was destroyed here.” On Holding’s red card the Arsenal manager added: “The choice is made. I cannot change it. The referee has to make the choice and react in football.”

Arsenal fell 3-0 to Spurs when a victory would have secured Champions League qualification. After Kane’s penalty made it 1-0 and Holding was dismissed, the Spurs striker scored again to double the hosts’ advantage against 10 men. Son then made it a three-goal lead just two minutes after the restart although they may not add a fourth or fifth.

And Arteta was irate post-match and voiced similar frustrations to his television interviews when sat down in front of journalists in his press conference. He continued: “I cannot do it [talk about the referees]. I’m really happy with my players and I’m looking forward to Monday night.

“I need to be on the touchline on Monday night. I don’t need to be suspended. We desired to play a game. We were so excited to play. You may see how we began. It was an attractive occasion and it was destroyed.”

Conte meanwhile warned his Spurs players they need to now go and beat Burnley on Sunday. Victory there would haul them two points clear of Arsenal before their north London rivals face Newcastle the subsequent day. He said: “To win this game it gave us the chance to proceed, to take our place within the Champions League. I’m pleased with the commitment. I used to be clear with the players, it’s alright to rejoice but when we do not win on Sunday it does not imply anything.”