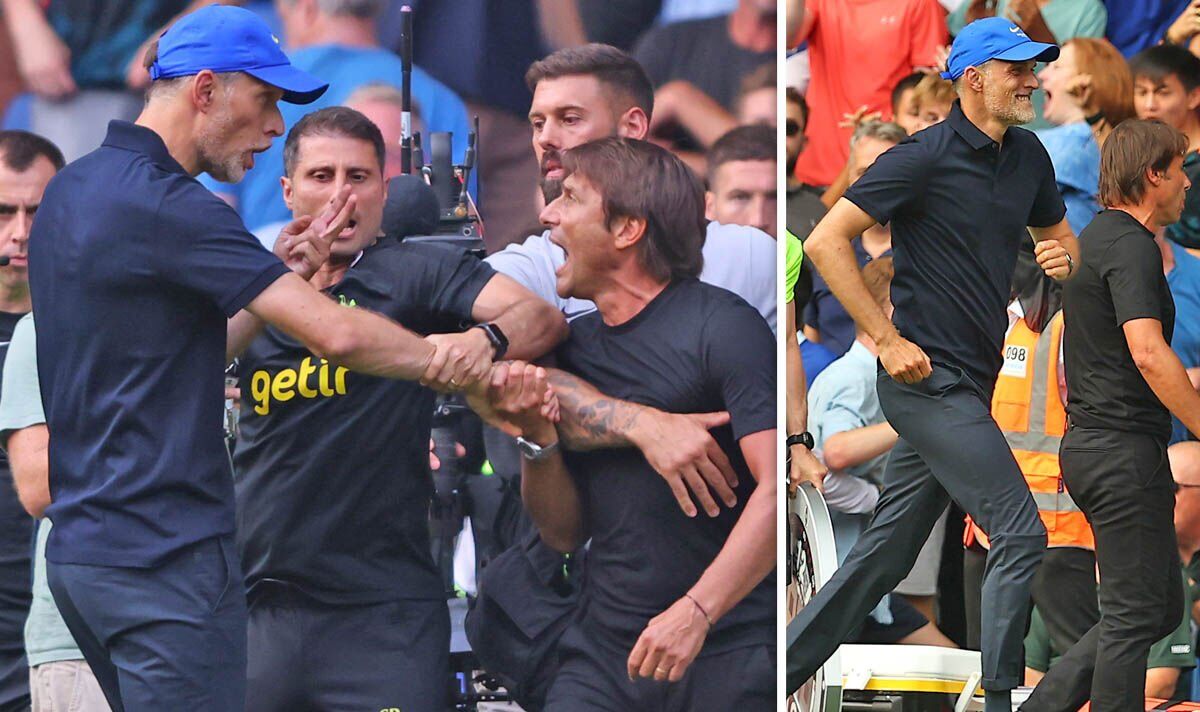 Tottenham boss Antonio Conte has joked he would have ‘tripped over’ Thomas Tuchel if he’d seen the Chelsea boss’ touchline sprint on Sunday afternoon. Each London giants played out a stirring 2-2 draw at Stamford Bridge. And, as temperatures rose, so too did tempers between the 2 managers of their respective dugouts.

Chelsea were the higher team against Tottenham for essentially the most part, scoring twice through Kalidou Koulibaly and Reece James.

But Spurs were in a position to leave their rivals with a degree to their name, with Pierre-Emile Hojbjerg and Harry Kane each on course for the visitors.

After James’ goal for Chelsea within the 77th minute, Tuchel ran down the touchline in celebration. It also seemed to be a response to Conte’s enthusiastic actions after Hojbjerg had drawn his side level.

And the Tottenham boss has now taken to social media to joke he’d have tripped Tuchel over if he’d been looking within the German’s direction.

“Lucky I didn’t see you..making you trip over would have been well deserved,” he joked, accompanying his message with laughing emojis.

It appears Conte was able to jest despite himself and Tuchel clashing on quite a few occasions through the contest.

Things got here to a head at full time, with the Italian’s opposite number refusing to let go of his hands after a handshake.

It seemed Tuchel took issue with Conte for not looking him within the eyes, as players and staff members of each Tottenham and Chelsea raced to get entangled.

All in all, it was a memorable return to Stamford Bridge for the Blues’ former boss.

“It might occur when the eagerness is high in each side.”

Conte proceeded to say he would ‘pay more attention’ the subsequent time he shakes hands with Tuchel, while also insisting they wouldn’t come to blows again.

“I’ll stay on my bench, he’ll stay on his bench. No problem about this,” he added.

Chelsea boss Tuchel, meanwhile, has insisted he has no ailing feeling towards Conte following the showdown in west London.

“I assumed after we shake hands you looked in one another eyes, but Antonio had a special opinion,” he said.

“He was completely satisfied after they equalised, and it got a bit heated, but nothing big… I believe it was not essential, but lots of things weren’t essential.

“It was something of nothing. I haven’t any ailing feeling.”

Tuchel did, nonetheless, slam referee Anthony Taylor – insisting he was flawed to award each Tottenham goals.

For Hojbjerg’s effort, Rodrigo Bentancur looked as if it would take out Kai Havertz to win back the ball with the sport then allowed to proceed.

There was also debate over whether Richarlison was offside, too, and obstructing the view of Blues goalkeeper Edouard Mendy.

Tuchel said: I don’t think just among the fans think that [Anthony Taylor has made some poor decisions against Chelsea].

“I can assure you the entire dressing room of us, each person, thinks that.

“That is for me with none explanation and I don’t need to simply accept it.

“Each goals shouldn’t stand and it’s a good result because we were sensible, deserved to win. That is my perspective.”