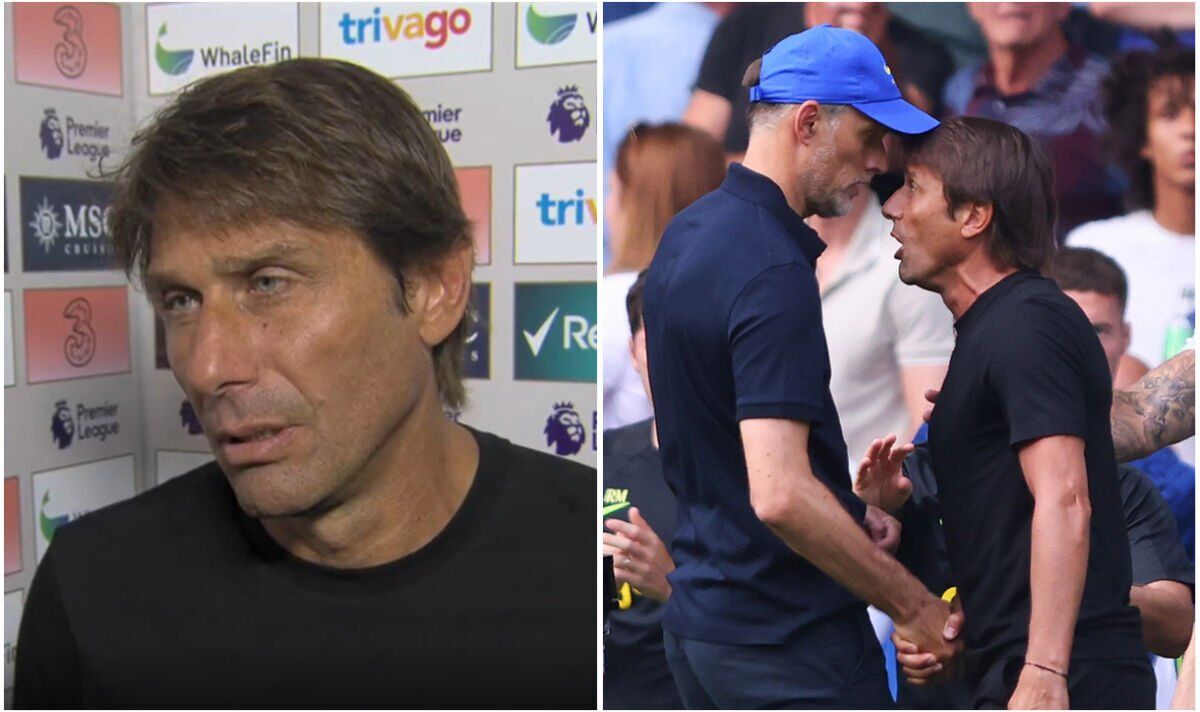 Tottenham manager Antonio Conte took evasive motion as he was pressed on a fiery argument with Chelsea boss Thomas Tuchel on Sunday. The managers clashed on several occasions during an entertaining 2-2 draw, with Harry Kane rescuing a degree for Spurs on the death.

Chelsea felt hard done by with Tuchel praising his players for ‘dominating’ Spurs. The German pointed to a series of controversial refereeing decisions after Kane’s 96th-minute header deflected off Reece James on its way into the online, earning the visitors a degree.

Earlier within the match, Kalidou Koulibaly had opened the scoring with a surprising volley from Marc Cucurella’s corner. Pierre-Emile Hojbjerg equalised within the second half before James restored Chelsea’s lead, and Kane headed in with seconds of the match remaining.

Tempers flared on the touchline with each Conte and Tuchel cautioned for an altercation after Hojbjerg’s goal. The feud then erupted at full-time when the Chelsea boss took issue with an absence of eye-contact from his Spurs counterpart when shaking hands and a flood of players and backroom staff joined the melee.

After the match, Conte was keen to maintain questions focused on the football. “In my view it’s higher to speak in regards to the game,” he told Sky Sports. “The sport was exciting and difficult for each teams but you need to attempt to be competitive. Chelsea showed to be a very good team but perhaps, in comparison with last season, we did higher.

“I don’t need to comment on the situation with Tuchel because it isn’t a very powerful thing. If it’s an issue, it’s between me and him, not for the others. We’re here to discuss football and never a situation between the 2 coaches.

On an incident that saw Cucurella pulled to the bottom by his hair shortly before Spurs’ equaliser, the Italian added: “Truthfully I didn’t see but there’s VAR and it was very clear to proceed the sport without taking the choice.”

The animosity supposedly continued when players and staff filtered down the tunnel as Conte ‘barged’ into Chelsea star Mateo Kovacic which led to a ‘screaming’ argument. Stakes were high for the Spurs boss on his former stomping ground and his star striker, Kane, actively sought out the positives from a rollercoaster afternoon once the dust had settled.

“First half we weren’t ok,” he admitted. “[But] we carried on fighting, pressing and thankfully we got one at the tip. We were a bit late once we were pressing and good sides punish you. We desired to play man for man and should you’re a second late, you are going to get punished. Second half we modified the formation a bit of bit and it definitely worked out higher.

“I’m blissful with the best way we fought back and it’s a pleasant feeling to get that one at the tip. I flicked it and saw the online rustling right in front of our away fans. Especially after I had that probability earlier within the second half, it was great to see that one go in. It was a crucial game for us to point out where we’re as a team.

“We have a protracted solution to go nevertheless it was essential after losing 5 or 6 times to Chelsea. To return away with a degree at the tip is a superb feeling.

On the scuffle, he added: “I saw everyone gathering at the tip and it was disappointing to see the red card. It’s an emotional game, each teams desired to win but that is sometimes what happens in these games.”