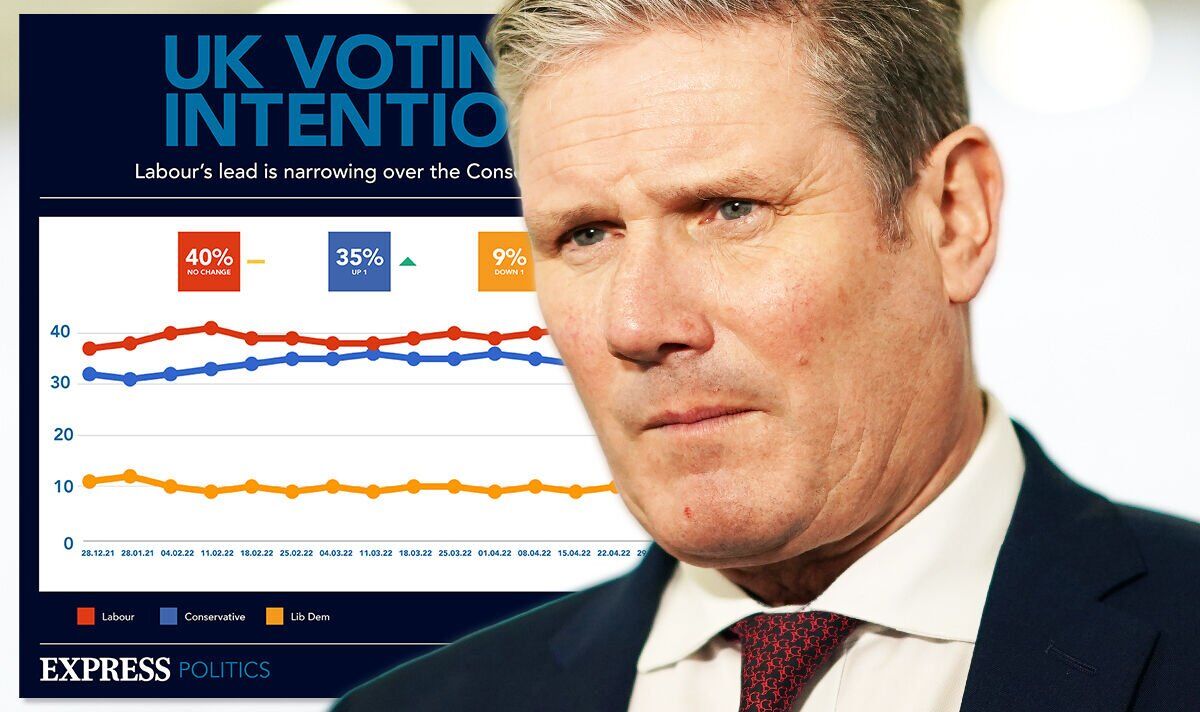 As local elections are set to happen across the UK, the Techne UK/ Express.co.uk tracker poll has shown that support for Labour is stuck at 40 per cent with no change, however the Conservatives have gone up some extent to 35 percent. That is the second week in a row where Labour’s lead has shrunk and follows criticism by senior MPs of Keir Starmer’s strategy of only focussing on Partygate.

Nevertheless, the news isn’t all good for Boris Johnson with only around a 3rd of respondents (35 percent) confident in his Government’s performance and 63 percent not confident.

Michela Morizzo, chief executive of Techne, said: “It’s now clear that Keir Starmer’s give attention to Partygate has reached its limit and voters are starting to show off.

“This doesn’t mean though that the Conservatives won’t face problems on Thursday. Confidence in them as a government is negative and it could be that many Conservatives who would vote in a general election and show up on this poll will stay at home for the local elections where turnout is traditionally much lower.”

The findings follow reported criticism by members of Starmer’s shadow cabinet of his tactics on focussing on Partygate.

Shadow communities secretary Lisa Nandy was said to be particularly critical of Starmer for failing to provide you with a policy platform or speak about voters’ biggest concerns, particularly the fee of living crisis.

In the previous couple of days following a letter from North West Durham Conservative MP Richard Holden, Durham Police have decided to review the unique decision.

One Labour source told Express.co.uk: “The strategy of focussing on Partygate is stalling. Voters are saying ‘a plague on all of your houses.’”

The concerns about apathy on Thursday was highlighted within the tracker poll showing that lower than half (48 percent) would definitely vote if there was a general election tomorrow while almost 1 / 4 (23 percent) wouldn’t vote.

Worryingly for Mr Johnson, Leave voters are twice as prone to stay at home as Remain voters.

One senior Conservative MP told Express.co.uk: “The issue we’ve got on Thursday isn’t our overall support which is pretty good for a midterm government.

“As an alternative the issue shall be Conservative voters sitting on their hands and never going to vote. So our overall support is unlikely to be reflected within the local elections.”

There are concerns at Conservative CCHQ that historic councils like Wandsworth, Westminster, Barnett and Havering could all be lost to the Tories in a London wipeout.

But they’re hopeful of picking up some seats in former Labour red wall areas.

Conservative support is strongest amongst pensioners who’re statistically more prone to vote based on the tracker poll.