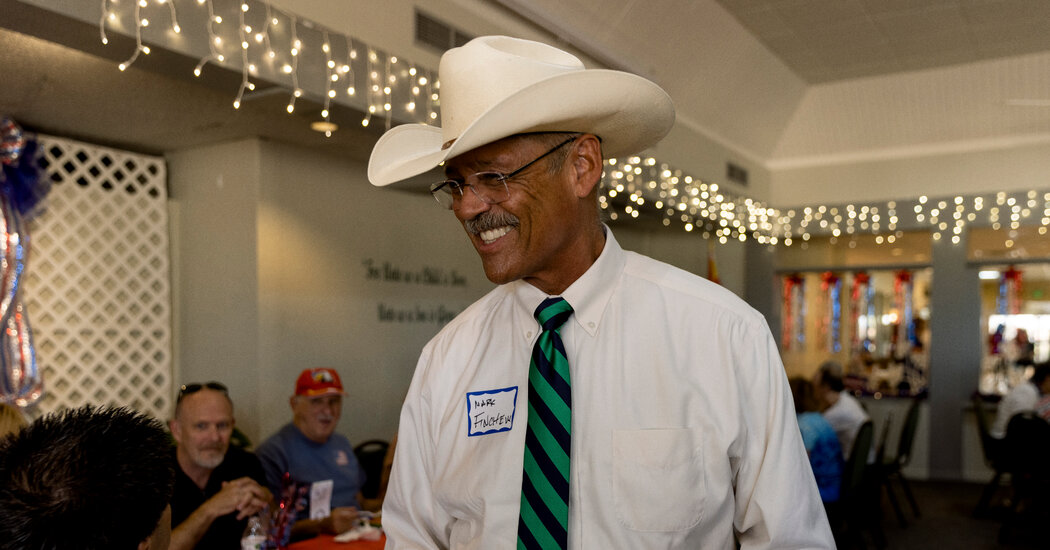 He speaks in sober and serious tones and presents himself as a common sense family man. When asked about his family life by one interviewer, he said his “kids are all grown and gone” and added that these days, “I’m excited about my grandkids” in battles he takes on.

But his family life has been rocky. He has been married 4 times and estranged for greater than 20 years from two adult children, and he doesn’t know their children, members of the family said. (He also has two stepchildren.)

He talks ceaselessly about his experience as a police officer and firefighter in Kalamazoo, Mich. But personnel records obtained from that city’s Department of Public Safety, which he left in 1999, include this note in his file: “Retired, poor rating, wouldn’t rehire.” A department spokesman declined to comment.

Mr. Finchem has raised greater than $1.2 million, a substantial amount for a campaign for secretary of state. (Mr. Lane has raised about $1.1 million, while the opposite two candidates trail significantly behind.) Much of the cash has come from out of state — seven of the eight donors who were listed as having donated the $5,300 maximum in his last two campaign filings were from elsewhere. Major donors include Brian T. Kennedy, a past president of the right-wing Claremont Institute, and Michael Marsicano, a former mayor of Hazleton, Pa., who recently lost a Republican congressional primary.

For all that, he has few visible signs of a staff or campaign office. About three-quarters of his expenditures, greater than $750,000, have flowed to a Florida political consulting firm run by Spence Rogers, the nephew of Wendy Rogers, an Arizona lawmaker with ties to white nationalists, campaign filings show. An extra $53,000, or nearly 5 percent of his total expenditures, have gone to payments to Mr. Trump’s Mar-a-Lago resort. (Many other Trump-backed candidates have done likewise, including Kari Lake, Mr. Trump’s favored candidate for Arizona governor, whose campaign has spent greater than $100,000 at Mar-a-Lago.)