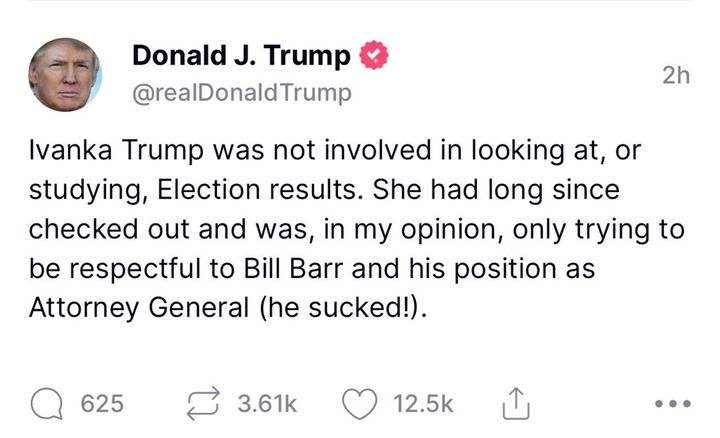 Former President Donald Trump spent Friday morning attempting to spin the story of the Jan. 6, 2021, attack on the Capitol in a series of messages posted to his social media app, Truth Social.

He specifically targeted his eldest daughter, Ivanka Trump, whose videotaped testimony was played partially on Thursday evening at the primary public hearing of the House select committee investigating the attack.

Rep. Liz Cheney (R-Wyo.), the committee’s vice chair, walked viewers through sworn testimony from Trump-era Attorney General William Barr through which he dismissed Trump’s claims that the 2020 presidential election was stolen as “bullshit.” Asked about Barr’s assertion, Ivanka said it “affected my perspective.”

“I respect Attorney General Barr, so I accepted what he was saying,” she said in a clip aired on the hearing.

The previous president responded by saying his daughter didn’t know what she was talking about.

“Ivanka Trump was not involved in , or studying Election results. She had long since checked out and was, for my part, only attempting to be respectful to Bill Bar and his position as Attorney General (he sucked!),” Trump wrote on Truth Social.

He also bashed Barr in other messages, calling him “weak and frightened” and a “coward.”

Ivanka Trump testified that she knew the election had not been “stolen.”

Trump was banned from Twitter and Facebook within the wake of the Jan. 6 attack for refusing to stop pushing falsehoods concerning the 2020 election. He eventually responded by launching his own platform, which could be very much like Twitter, and now posts there in his familiar emphatic, over-capitalized style.

“A one sided, totally partisan, POLITICAL WITCH HUNT!” Trump wrote in one other Truth Social message.

Although he posted once throughout the hearing, calling the “Unselect Committee” a gaggle of “political HACKS,” he saved most of his anger for Friday morning.

“The so-called ‘Rush on the Capitol’ was not brought on by me, it was brought on by a Rigged and Stolen Election!” Trump wrote in one among eight hearing-related messages. 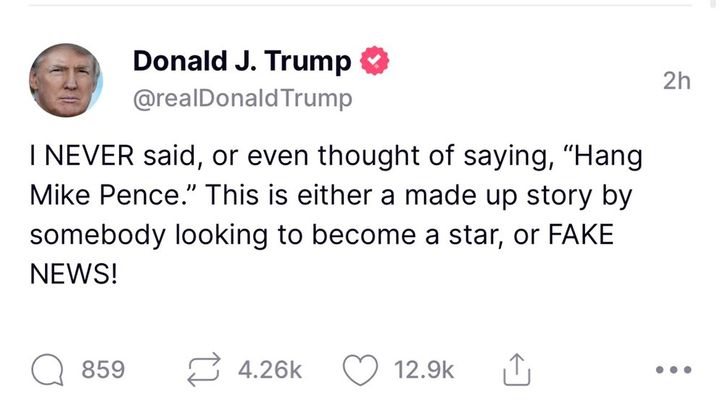 Violent Trump supporters called for Pence to be punished for refusing to assist overturn the election results.

In one among the hearing’s more astonishing moments, Cheney said that the committee had uncovered how Trump responded within the White House after learning that the mob of his supporters were chanting “hang Mike Pence” as they stormed the Capitol. A noose on a makeshift scaffold was found on the grounds of the constructing that afternoon.

“Possibly our supporters have the suitable idea,” Trump said, in Cheney’s telling based on witness statements. “Mike Pence deserves it.”

“I NEVER said, and even thought of claiming, ‘Hang Mike Pence.’ That is either a made up story by any person trying to turn into a star, or FAKE NEWS!”

Trump had unsuccessfully urged his vp to overturn the outcomes of the election by interfering with their official certification regardless of the law.

The committee expects to carry several more public hearings to share what they’ve found up to now; the following is about for Monday at 10 a.m. EST.