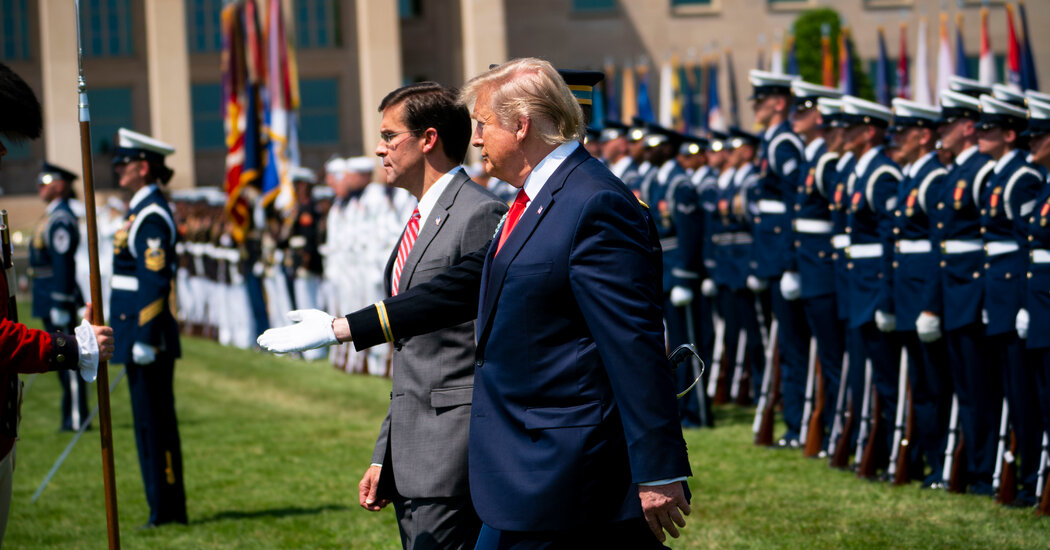 In Mr. Esper’s telling, Mr. Trump seemed more emboldened, and more erratic, after he was acquitted in his first impeachment trial. Mr. Esper writes that personnel selections reflected that reality, as Mr. Trump tried to tighten his grip on the manager branch with demands of private loyalty.

Amongst Mr. Trump’s desires was to place 10,000 active-duty troops on the streets of Washington on June 1, 2020, after large protests against police brutality erupted following the police killing of George Floyd. Mr. Trump asked Mr. Esper concerning the demonstrators, “Can’t you only shoot them?”

Mr. Esper describes one episode nearly a month earlier during which Mr. Trump, whose re-election prospects were reshaped by his repeated bungling of the response to the coronavirus pandemic, behaved so erratically at a May 9 meeting about China with the Joint Chiefs of Staff that one officer grew alarmed. The unidentified officer confided to Mr. Esper months later that the meeting led him to research the twenty fifth Amendment, under which the vice chairman and members of the cupboard can remove a president from office, to see what was required and under what circumstances it is likely to be used.

Mr. Esper writes that he never believed Mr. Trump’s conduct rose to the extent of needing to invoke the twenty fifth Amendment. He also strains to offer Mr. Trump credit where he thinks he deserves it. Nonetheless, Mr. Esper paints a portrait of somebody not in charge of his emotions or his thought process throughout 2020.

Mr. Esper singles out officials whom he considered erratic or dangerous influences on Mr. Trump, with the policy adviser Stephen Miller near the highest of the list. He recounts that Mr. Miller proposed sending 250,000 troops to the southern border, claiming that a big caravan of migrants was en route. “The U.S. armed forces don’t have 250,000 troops to send to the border for such nonsense,” Mr. Esper writes that he responded.

In October 2019, after members of the national security team assembled within the Situation Room to look at a feed of the raid that killed the Islamic State leader Abu Bakr al-Baghdadi, Mr. Miller proposed securing Mr. al-Baghdadi’s head, dipping it in pig’s blood and parading it around to warn other terrorists, Mr. Esper writes. That may be a “war crime,” Mr. Esper shot back.

Mr. Esper also viewed Mark Meadows, Mr. Trump’s final White House chief of staff, as an enormous problem for the administration and the national security team specifically. Mr. Meadows often threw the president’s name around when barking orders, but Mr. Esper makes clear that he often was not certain whether Mr. Meadows was communicating what Mr. Trump wanted or what Mr. Meadows wanted.