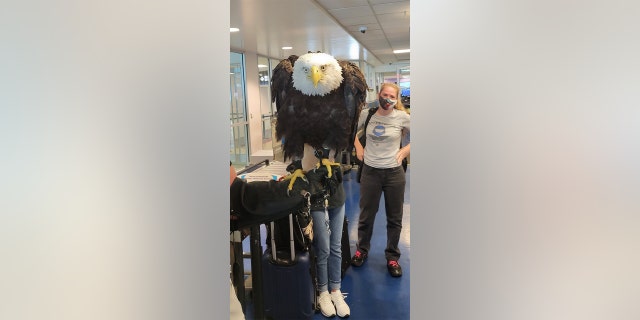 TSA agents on the Charlotte Douglas International Airport in North Carolina recently screened a bald eagle named Clark who was traveling together with his handler.

On Thursday, the Twitter account for the TSA Southeast region posted pictures of Clark as he and his handler went through the safety line.

“TSA officers are used to seeing an eagle on their uniform as they appear over their shoulder, but I’m sure the team at @CLTAirport Checkpoint A did a double take once they saw an actual one earlier this week,” the agency tweeted.

“Our special guest was Clark the Eagle with the World Bird Sanctuary, who decided to present his wings a break and fly industrial,” the agency said in a second tweet. “His airline notified us and we screened him and his handler.”

The tweet continued: “Clark is trained to spread his wings, and even showed off a bit during screening.” 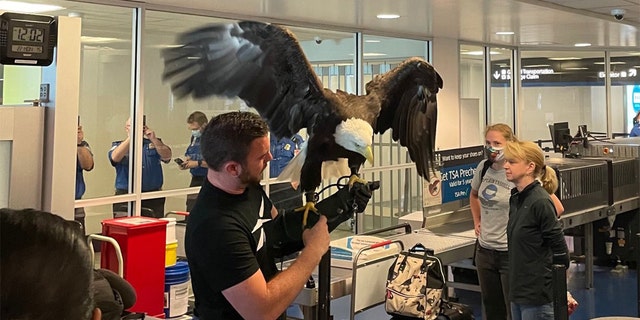 Clark travels across the country to fly at events akin to university convocations and baseball games.
(TSA Southeast)

Individuals who responded to the tweets were in awe of the bird.

One other wrote: “He’s gorgeous!”

Clark was traveling home to the World Bird Sanctuary after flying on the High Point University convocation ceremony to welcome the incoming freshman class, in keeping with the sanctuary’s Facebook page.

Clark is certainly one of 4 bald eagles that travels across the country to fly at different venues and events, in keeping with the World Bird Sanctuary website.

The web site says that Clark hatched in 2002 on the World Bird Sanctuary as a part of a project that bred then-endangered bald eagles to return them to the wild.

Clark was hatched with scale deformities on his feet that may have made them unprotected from cold temperatures in winter, so he stayed on the sanctuary while his siblings were all released, the web site says.