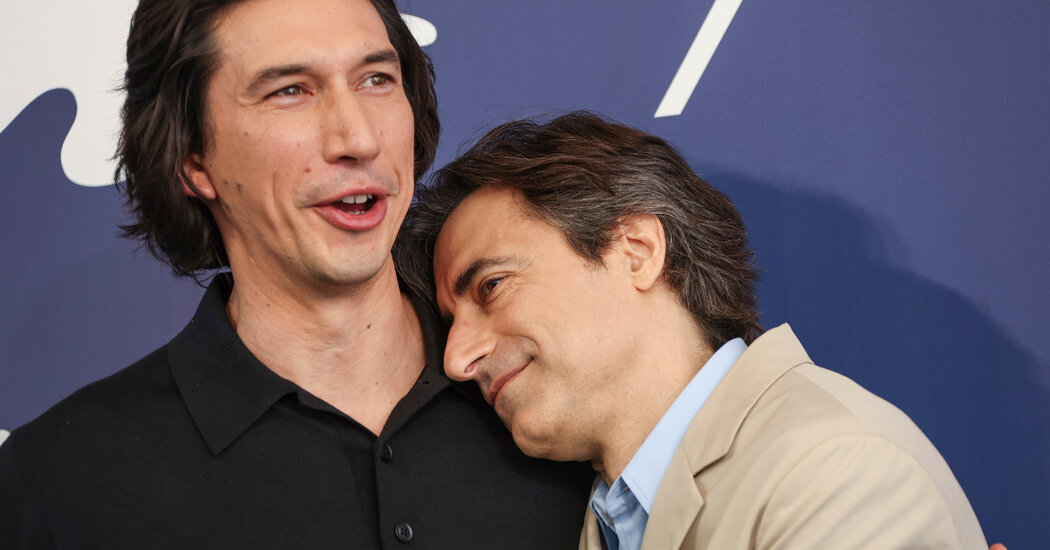 VENICE — Noah Baumbach will not be a fan of Netflix’s “skip credits” feature. When he directed “Marriage Story” and “The Meyerowitz Stories,” Baumbach implored the streaming service not to hurry viewers past the closing credits and into the following piece of content before the film has technically concluded. Still, the 52-year-old director realizes that on this front, he is perhaps an old-school outlier.

“After I’m watching a movie with my 12-year-old and it finishes, I wish to decompress and watch the credits, at all times,” Baumbach told me Thursday on the Venice Film Festival. “And he’s like, ‘OK, what’s next?’ For him, it’s just words on a screen, but I’m like, ‘Let’s just vibe out on the fonts.’”

To make sure the survival of closing credits, filmmakers now need to make something truly unskippable, and it’s here that Baumbach has delivered in spades: At the tip of his recent film, the Venice opener “White Noise,” he delivers a full-blown musical number starring all the solid and set to the primary recent LCD Soundsystem song in five years. It’s a deliriously fun sequence that has dominated chatter in the primary 24 hours of the festival and is doubly surprising because, just like the movie itself, it finds Baumbach working at a scale he’s never before tried.

In “White Noise,” adapted from the 1985 novel by Don DeLillo, Adam Driver and Greta Gerwig play married parents Jack and Babette Gladney: He’s a paunchy professor who blathers about his “advanced Nazism” course, she’s a pill-popper with a mighty ’80s perm. (“She has essential hair,” coos Don Cheadle as one in all Jack’s colleagues.) The couple’s pillow talk involves morbid debate over which ones will die first, but when a toxic spill forces their neighborhood to evacuate, our leads must confront their obsession with death in a way that hits much closer to home.

The one thing that ever seems to appease these neurotics is the local supermarket, a gleaming, jumbo-sized temple of consumerism where every little thing is at all times in the proper place. With its abundance, bright-white lights and collection of familiar, beaming faces, a visit to the supermarket in “White Noise” isn’t identical to going to heaven — it’s higher.

That makes it the proper place to set the end-credits number. Don’t worry, the sequence isn’t a spoiler — it’s more of a coda, and “a visible, visceral, physical representation of what I felt just like the whole movie was about,” Baumbach told me.

Here, nearly every character within the movie cavorts amongst aisles of Hi-C, Doritos and Ritz Crackers while Driver and Gerwig pull boxes from the shelves with Busby Berkeley-level precision. Later, staff within the checkout area throw plastic bags into the air as in the event that they were feathered fans, and a coterie of faculty professors — played by the likes of Cheadle, Jodie Turner-Smith, and André Benjamin — boogie in a charmingly fussy fashion.

“As I arrived at the tip of the script, it revealed itself to me because the thing to do,” said Baumbach, who likened it to smaller cinematic flourishes that close his previous movies: “‘Frances Ha’ has no unmotivated camera until the very end, after which there’s a push in on her face — it’s quite simple. ‘Meyerowitz Stories’ is all piano music after which an orchestra is available in at the tip. I like attempting to listen for those things.”

He went to LCD Soundsystem frontman James Murphy, who also contributed to Baumbach’s “Greenberg” and “While We’re Young,” to craft “Recent Body Rhumba,” an upbeat, catchy song about death for the sequence. “I said, essentially, write the song you’ll have written in the event you were writing songs in 1985,” Baumbach said.

“For me, that’s not a tough nudge,” Murphy said on the film’s premiere party. If writing ’80s-inflected songs is well in his wheelhouse, what was the best challenge, I asked? “Trying to not die before the song was done,” Murphy replied mordantly. (Jack and Babette could scarcely have phrased it higher.)

The dance sequence, choreographed by David Neumann, was shot over two days at an abandoned Ohio superstore. “It actually was as joyful shooting it because it is to observe it,” Baumbach said. “It was this contagious feeling. It just felt good. And though Baumbach has flirted with making a movie musical before — he and Driver once explored the concept of adapting Stephen Sondheim’s “Company,” eventually using that show’s “Being Alive” because the climactic sung number in “Marriage Story” — making “White Noise” hasn’t fully scratched that itch.

“It makes me enthusiastic about doing more of that,” said Baumbach, who also used Neumann to choreograph the movie’s chaotic family breakfasts and big crowd scenes. “I feel this whole movie opened up things for me, points of moviemaking that I’ve at all times been drawn to that the flicks I’ve made haven’t needed or wanted.”

And it could offer a tantalizing throughline to Baumbach’s next project: “Barbie,” a big-screen tackle the enduring Mattel doll that Gerwig is directing from a script she co-wrote with Baumbach. Little is thought in regards to the plot of the movie, which stars Margot Robbie and Ryan Gosling, though co-star Simu Liu has divulged that it should feature dance sequences, and Baumbach appeared to verify that.

“It’s at all times exciting to me,” he said, “when a movie will be many things at the identical time.”