Vermeer Did Not Paint ‘Girl With a Flute,’ National Gallery of Art Reveals 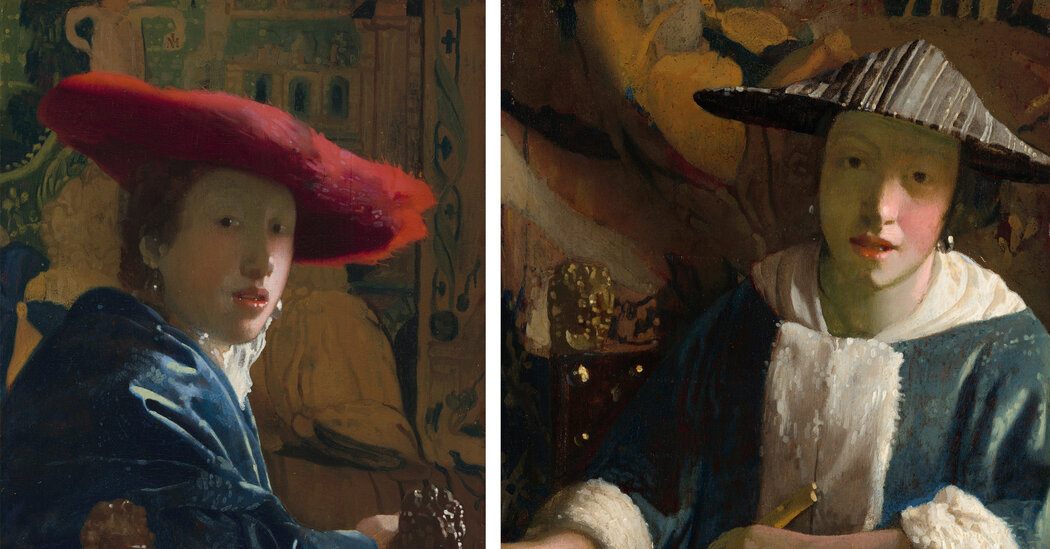 For the past three many years, art historians have questioned the authenticity of two paintings by Vermeer held in the gathering of the National Gallery of Art in Washington. They were the one paintings amongst his authenticated works that were accomplished on wood panels.

So while the museum was closed throughout the coronavirus pandemic, its curators, conservators and scientists used powerful recent technology to look beneath the paintings and take a look at to determine exactly whose hand was responsible.

On Saturday, the group will present its findings and officially change the attribution for “Girl With a Flute.”

It’s a Vermeer no more.

Microscopic pigment evaluation and advanced imaging technology revealed an unusual approach to layering pigments throughout the painting. Whoever was imitating the Seventeenth-century Dutch artist had botched his process, leaving the image with a rough finish unlike the graceful surfaces which have distinguished Vermeer as considered one of history’s finest painters.

“The science techniques showed the artists used similar materials in similar ways, but they handled the paint in a different way, from the underpaint to the ultimate surface paint,” said Kathryn A. Dooley, an imaging scientist on the National Gallery who worked on the project.

The museum’s collection includes 4 Vermeers, and all of them were examined with the advanced technology, including two of his undisputed works. “Girl With the Red Hat,” which like “Girl With a Flute” was painted on a wood panel, was deemed authentic. They’ll all be featured in a recent exhibition on the National Gallery called “Vermeer’s Secrets,” together with two known forgeries from the twentieth century which are within the museum’s collection.

There are only about three dozen surviving examples of Vermeer’s paintings, so changing the attribution for even a single work can have a seismic impact on the tutorial scholarship and cultural programming built across the artist.

Marjorie E. Wieseman, head of the National Gallery’s department of Northern European paintings, worked with its research team to develop possible explanations for who painted “Girl With a Flute.”

She reasoned that the mystery painter was most probably to fall into considered one of the next categories: an apprentice to Vermeer, a member of the family, an amateur who paid for lessons or a contract artist hired on a project-by-project basis. But no surviving documents mention any assistants in Vermeer’s studio or pupils registered with the local guild.

“There’s quite a bit we don’t know,” Wieseman said. “We all know nothing about who created this and under what circumstances.”

Recent technological advancements have supplied museums with recent tools for unearthing hidden details of their centuries-old paintings. Last 12 months, the Dresden State Art Collections in Germany accomplished a restoration of Vermeer’s “Girl Reading a Letter at an Open Window” that exposed a picture of Cupid that might need been painted over by a distinct artist.

Wieseman said the technology made it possible to grasp that “Girl With a Flute” was modeled by one one that knew the secrets of Vermeer’s technique, which had been unattainable to inform by looking only on the surface of the finished painting.

“With these most up-to-date developments in imaging modalities, the sky’s the limit,” she said.

Arthur K. Wheelock Jr., the National Gallery’s previous head of Northern European paintings and a Vermeer expert, said he believed that two people were liable for “Girl With a Flute,” explaining that the renowned artist might need sketched out the image before another person finished it. “I even have struggled with this painting endlessly,” he said, adding that the painting had been attributed to the circle of Vermeer as recently because the National Gallery’s 1995 exhibition on the artist.

One fringe theory amongst historians speculates that Vermeer’s eldest daughter, Maria, became his secret apprentice and accomplished some paintings after his death, including this one.

“I’m not surprised that the museum is changing the attribution, but I’m undecided that I entirely agree,” said Aneta Georgievska-Shine, the writer of a recent book concerning the Dutch artist. “I still think that it was more likely began by Vermeer.”

The National Gallery’s research provided additional insights. Awkward brushstrokes in “Girl With the Red Hat,” Georgievska-Shine said, might support a well-liked theory that Vermeer used a camera obscura to project images onto his work surface, which might have required him to quickly sketch out his scenes before the sunshine faded. The museum’s researchers, nonetheless, said the brushstrokes contained no evidence of a link to the camera obscura, a variety of pinhole camera.

Despite its reduced status, “Girl With a Flute” remains to be expected to travel next 12 months to the Rijksmuseum in Amsterdam for what’s being billed as the biggest exhibition of Vermeer’s work. The National Gallery has no plans to remove the artwork from view.

“It will not be a nasty painting,” Wieseman said, explaining that it could grow to be a potent reminder of how museum research is continuously shifting our perception of the past. “Artists had people working alongside them who emulated them at every step of the best way.”