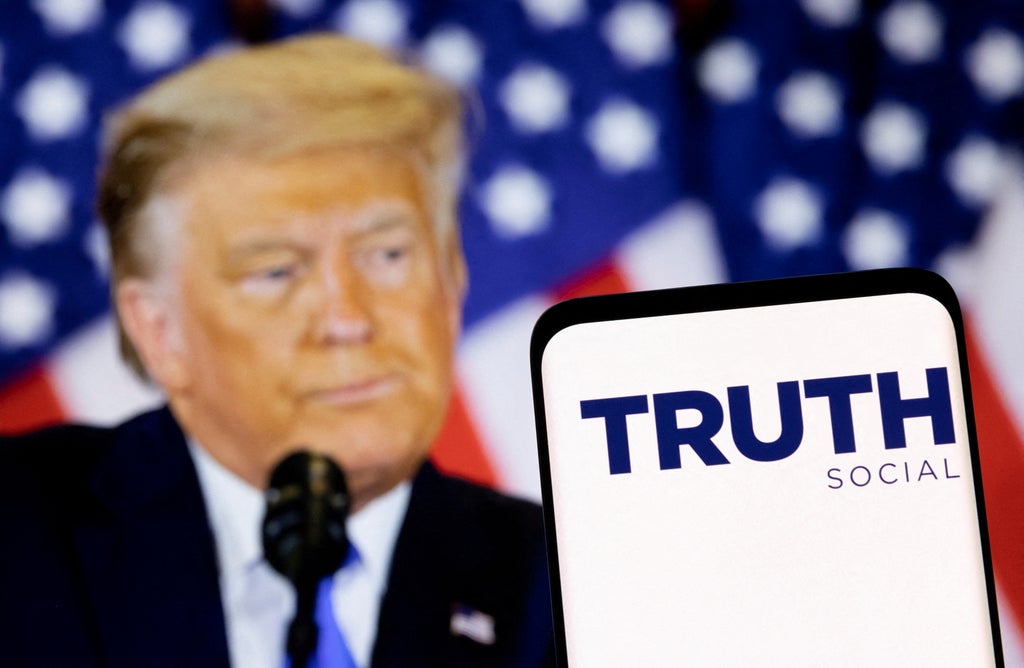 After world’s richest person Elon Musk announced a deal to purchase Twitter for $44bn, one other social media platform climbed up the charts of Apple’s App Store.

Truth Social, former President Donald Trump’s platform to “rise up to the tyranny of Big Tech,” as he described it, is essentially the most high profile amongst several newer platforms to launch as a direct challenge to mainstream platforms like Facebook, Instagram and Twitter, viewed amongst right-wing figures and users as too constrictive or conspiring to remove their views after they were kicked off for flouting rules about Covid-19 misinformation, violence and harassment.

Throughout the three months after its launch, the previous president’s account posted just once, before the app launched to the general public in February: “Get Ready! Your favorite President will see you soon!”

On 28 April, the account posted “I’M BACK! #COVFEFE” with a picture of himself using his phone while standing outside his Mar-a-Lago resort in Florida. Over the following few days, he posted greater than a dozen times – a mixture of video clips from rally speeches, celebrating his television rankings and downloads for his app, lying about election results, and grievances with “fake news” and Democrats.

The app became available for download on 20 February, but most users were added to a waitlist (I used to be 327,997th in line) to give you the chance to open and start using the app.

An email on 6 March said “we appreciate your eagerness to affix our fight against Big Tech censorship” and provided an update on the app, which phased in users in an effort to “treatment errors in real time” as recent users were added.

“We’re constructing a platform to tackle Big Tech, but in a fraction of the time. Consequently, we want to make sure the platform stays stable and provides users with the perfect experience possible,” in response to the e-mail. “Our mission is to reclaim the digital public square totally free expression. Rest assured, your entire TRUTH team is working across the clock to permit everyone to affix us as quickly as possible. There are great things to come back. Thanks!”

On 24 April, I used to be sent a confirmation code via text message to start using the app.

The app itself is fairly straightforward and recognisable to anyone who has used a social media app on their phone. Posts are called “Truths” and every “Truth” in a user’s feed has a comments section and may be “re-Truthed” or liked, mirroring Twitter interactions.

There are 4 menu items on the underside of the screen – a feed that features updates from the accounts one follows, a search function (for each accounts and “Truths”), alerts (app notifications), and messages, where users can directly message each other. That function just isn’t yet available.

Despite billing itself as a platform for “free expression” against the alleged tyranny of corporations like Twitter, the accounts really useful to recent users are all throughout the prolonged Trump universe and singularly dedicated to a right-wing media ecosystem.

The previous president has greater than 2 million followers and follows two accounts: the official Truth Social account and an account for the platform’s user support.

The app also recommends users to follow right-wing media corporations like Newsmax, Breitbart, One America News Network, The Epoch Times, and Right Side Broadcasting Network – which has filmed nearly round the clock coverage of Trump rallies – in addition to conservative satire website The Babylon Bee, which was suspended on Twitter for misgendering Rachel Levine, the US Assistant Secretary for Health, a transgender woman.

Once following those accounts, a lot of the “Truths” that appear on the user’s timeline usually are not much different, or no different in any respect, to posts that will otherwise exist on Twitter – low-resolution impact text memes, criticisms of Joe Biden and congressional Democrats, and complaints about “the left” who’re having a “meltdown” over the return of “free speech.” Some Truths are only screenshots of posts from Twitter.

Searches for “Covid” or “vaccines” found “no matching truths” but lots of of hashtags to “Truths” with rampant misinformation and bogus conspiracy theories.

When it launched in 2018, Parler – which described itself as “unbiased social media focused on real user experiences and engagement” that permits “free expression without violence and no censorship” – quickly developed right into a similarly reiterative right-wing echo chamber, dominated by support for Mr Trump.

By fall 2020, the platform carried “Stop the Steal” messaging from across the US to thousands and thousands of users, including individuals who organised across the attack on the US Capitol on 6 January, 2021.

Greater than 800 people have been charged in reference to the Capitol riots, a lot of them leaving a digital footprint through their social media platforms, where the “stolen election” myth and plans to organise for six January were prolific, from posts on the pro-Trump message board The Donald to QAnon-hosting 8Kun, on messaging apps like Gab and Telegram, and on mainstream platforms like Facebook groups, Reddit message boards, and across Twitter.

The attack on Congress and violent support online prompted Twitter and Facebook to chop Mr Trump and others from their platforms, while Amazon, Apple and Google shut off access to Parler.

Within the aftermath of the attacks, Twitter also removed greater than 70,000 accounts that promoted QAnon-related content, spanning conspiratorial posts related to the baseless narrative that the election was stolen from Mr Trump, envisioned as a prophetic figure secretly fighting a Democratic cabal, as a part of a conspiracy-driven community often counting on antisemitic and racist tropes and hate speech.

Those users have thrived online elsewhere, convinced they were targeted to be “deplatformed” on Twitter or “shadowbanned” after they tried to return.

The platform also hosts figures who were banned elsewhere for violating content policies but have since developed followings on platforms like Telegram.

“Thanks Truth Social for calling me this morning and verifying my account,” said conspiracy theorist Ron Watkins, the location administrator of a message board that facilitated posts from the “Q” persona. Mr Watkins is running for the Republican nomination for a congressional race in Arizona, and he has repeatedly denied his connection to QAnon.

Hashtags related to the QAnon slogan “where we go one we go all” are attached to lots of of recent posts, and profiles dedicated to “the good awakening” – the ascendance of a far-right renaissance with Trump on the helm – and other QAnon-referencing accounts are easily searchable through the platform’s account search function.

Those posts live amongst others celebrating each the demise of Twitter and Mr Musk’s acquisition, top hashtags complaining about gas prices and inflation, posts praising God, and other posts with users thoughts about current events and global politics, appearing as they’d in a Twitter or Facebook seek for similar keywords.

Inside minutes, Mr Trump’s “I’M BACK” post was shared greater than 10,000 times.

“POTUS Trump has broken his silence on @truthsocial!” said QAnon influencer QAnon John of The Patriot Voice to his 16,000 followers. “BQQMS INCOMING!”