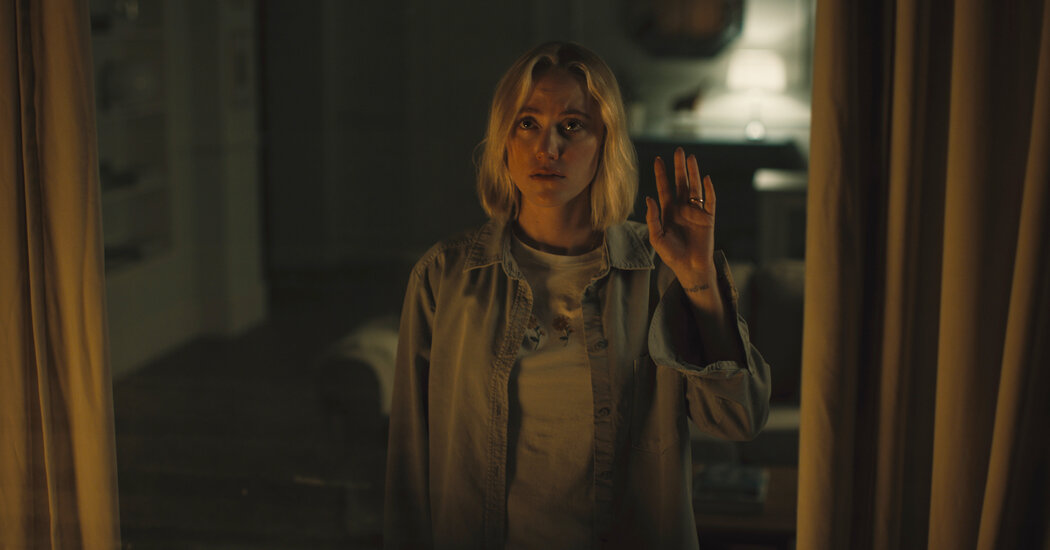 Stream it on Shudder.

My pick for the scariest movie of the 12 months is Chloe Okuno’s nerve-shredding feature debut a couple of young woman who swears she’s being watched and stalked by a person in an apartment constructing across from hers.

The setting is Bucharest, where Julia (Maika Monroe, so good) has moved along with her husband, Francis (Karl Glusman), after he gets a promotion. A killer is on the loose, so it is sensible that Julia has her suspicions concerning the creep she sees standing at a window seemingly observing her, the identical guy she thinks followed her around a supermarket. Is she right? Or paranoid?

Boldly feminist and intensely chilling, “Watcher” is a Halloween movie for individuals who think they don’t like horror but want to offer a extremely scary and (mostly) gore-free horror movie a shot. (Watch it throughout the day in case you’re antsy.) Okuno dishes out the heebie-jeebies with ruthless precision — watching is like being on a roller-coaster incline and seeing the tracks ahead splinter. Be warned: It’s possible you’ll never have a look at grocery bags the identical way again.

Laura (Andrea Riseborough) lives along with her husband and teenage son on a quiet street in a small town in Northern Ireland. There’s a recent family round the corner: Marie, her husband and their young daughter, Megan, who reminds Laura of her own little girl, who died in a automotive crash.

When Marie fails to select Megan up from school someday, Laura gives her a ride home. But on the way in which, Megan (Niamh Dornan) asks Laura if she remembers a cemetery — a bizarre query, one among many to come back, that makes Laura begin to wonder if Megan is likely to be her own daughter reincarnated. Laura loses her grip on reality as she obsesses about who or what’s possessing Megan, until a final, jolting twist torpedoes reality.

Stacey Gregg’s feature debut, which she also wrote, is an intimate psychological thriller that relies not on mayhem but on moments so delicately icy, they ought to be stamped as fragile. A scene at a playground with tiny feet dangling within the air had my nerves on edge — one among many small but shattering moments that make this film an affecting and effective scare. Chloë Thomson’s cinematography is strange and spectral.

‘Nocturna: Side A — The Great Old Man’s Night’

Stream it on Shudder.

Ulysses (Pepe Soriano) is old, and he’s feeling it. He gets lost within the constructing where he lives along with his nagging wife, Dalia (Marilú Marini), and he can’t remember their estranged daughter’s name.

Late one night, their neighbor Elena (Desirée Salgueiro) frantically bangs on their door with pleas for unspecified help. They refuse, terrified that if outsiders see the condition of their home, they’ll be one step closer to eviction. When Elena winds up dead, Ulysses wonders if she may need been a scared, lost ghost in need. The reply — depicted in touching flashbacks and distorted supernatural flourishes — is heartbreaking.

The author-director Gonzalo Calzada skillfully weaves together dread and sadness in his haunting Spanish-language ghost story that’s as much about forgiveness and regret because it is concerning the terrors of aging and our fear of death. (He also directed a shorter companion film subtitled “Where the Elephants Go to Die.”) With one finger, he plucks your nerves and with one other he tugs at your heartstrings, which makes this a movie for an incredible scare and cry.

Rent or buy it on Amazon.

It’s not in the identical league as KFC’s meta-camp holiday romance about Colonel Sanders. But this family-friendly horror comedy, made in collaboration with the Spirit Halloween retail chain, is delightful.

The film starts within the Nineteen Forties when a witch (Michelle Civile) curses and kills an evil codger (Christopher Lloyd!) who desires to take over an orphanage. Fast forward to the current, when his spirit has made its way into the hulking animatronic characters at a Halloween store where middle school friends Jake (Donovan Colan), Bo (Jaiden J. Smith) and Carson (Dylan Martin Frankel) have secretly camped for the night. The children battle a possessed teddy bear and other monsters until dawn, when Bo’s grandmother (Marla Gibbs!) reveals a prophetic secret.

The director David Poag has said that for his feature debut he desired to explore what was “most terrifying to our 10-year-old minds.” He nailed it, combining a heartfelt message concerning the tough transition from tween to teen with the us-versus-aliens spirit of “Stranger Things” and the trapped-in-a-store thrills of “The Mist.” Horror-curious kids 8 to 13 will get a kick out of it.

Rent or buy it on most major platforms.

This recent animated film made news recently for speaking out loud that which discerning Scooby-Doo fans have known for the reason that series’s first episode aired in 1969: Velma likes girls. The young woman who makes the nerdy sleuth’s glasses melt is the evil-chic Coco Diablo, the exacting head of a Halloween costume crime syndicate.

Should you’re a longtime queer fan of the Scooby-Doo franchise, or animation in any respect, this exchange between Velma (played by Kate Micucci) and Daphne (Grey DeLisle) might be lesbian music to your ears:

“Who am I kidding?” Velma asks, her voice desperate with puppy love. “I’m crushing big time, Daphne. What do I do? What do I say?”

“Just be yourself,” Daphne replies.

Beyond its queer significance, Audie Harrison’s film is my pick for young kids, so long as they won’t be too scared by cackling ghouls, and for nostalgic adults who need to introduce their kids to “The Ballroom Blitz.” Put it on with the family whilst you’re carving pumpkins or gorging on Halloween’s candy windfall. Or invite friends over for cocktails and homemade Scooby snacks and debate what Velma and Coco would wear at their wedding.